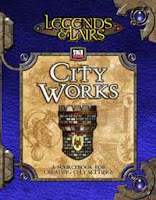 This is the first in what will be a weekly series ... "Weekend Retrospectives & Reviews" and hopefully they will provide me with an amusing opportunity to share and highlight my thoughts and experiences with a variety of gaming books and systems.

Now, with Mike Mearls being mentioned quite a bit recently with the work being done of the new edition of Dungeon's & Dragons, I thought I would kick off with looking at some of the things he's done in the past. Before he joined up with WOTC, he was a quite a prolific writer and designer in the hobby --amongst some of the stuff he's done, he worked quite a bit with Fantasy Flight Games and had significant contributions in the d20 'Legends & Lairs' series of books.

After being introduced to Castles & Crusades back in 2006, I began acquiring many d20 books as well as some older pre-d20 era material to supplement and source from for my various campaigns. I must of spent a small fortune on material between 2006 and 2008 but was always mindful of great deals when I could get them. By this time, D&D 3.5 was out in force but Pathfinder was nothing more than a new campaign setting by Paizo. This meant several years of huge amounts of d20 material been release -- some of which were designed when the OGL was introduced along with D&D 3.0.

Fantasy Flight Games was one of many game publishers that took advantage of the d20 boom but like many others... some of their products ended up being good deals as inventory was cleared. Fantasy Flight Games themselves have held in the past sales close to X-Mas and it was back at the end of 2006 that I stumbled upon one and their clearance of most of the Legends & Lairs line. City Works was one of them and I was buying these books, all decent enough quality hardcovers, at $5 per book. The book proved to be one hell of a bargain at $5 and part of the reason they were discounted was the simple reason that these were largely made to run with D&D 3.0. The rules differences between 3.5 and 3.0 were, of course, minor and this was hardly an issue for me given that I actually was running a C&C game. With it being largely being C&C compatible, conversions for any thing I might be interested in would have been a synch.

Crunch aside, the book provides an excellent amount of material which can be used for any game. The book itself is broken down in five chapters... Characters, City Basics, City Construction, City Adventures, and finally City Encounters.

Of the all the chapters, the first chapter has the most crunch but even then, takes a nice approach. It presents the typical fantasy archetypes (Barbarians, Fighters, Clerics, etc) and talks about the typical roles they may fill within a city based fantasy campaign. With one of these books meant for third edition, it obviously has a section for new spells and new feats but thankfully, this doesn't go on for pages. It provides a couple new character classes (the Acrobat, Assassin, and Pit Fighter) as well as some Prestige classes.

The next couple of chapters, City Basics and City Construction, really go hand in hand. City Basics really takes a good look at everything from possible origins and histories as well as influences of politics, factions, and economy. This chapter is pretty much 'crunch-free'. The following chapter though really is there to provide tons of information to better help the GM design a city block/section by block/section. If you like tables, then you'll like this chapter and none of these tables are system specific.

The last two chapters really are more for running a campaign within a city... there are more tables in these chapters and, once again, largely can be used with any system though, in some instances were they provide modifiers for various incidents or hazards, they are assuming a d20 based system.

The book also provides a 'preview' chapter of another book from the Legends & Lairs series and most did something like this. I suppose it helped 'pad' the book and provided an easy way to showcase other books in what was (and still in) and excellent and often under-appreciated series. The preview in this case was all fluff/no crunch section of 'Sorcery & Steam'. Quite nice actually though it might not be everyone's cup of tea. All in all, the hardcover runs at 175 pages and the original MSRP was $24.95 -- a good value for what it was. It's a book that seems to have held at least some of it's value though and I haven't personally seen many used copies of the books since I originally picked mine up. Noble Knight Games has a NM- copy of it for $24.00. Unfortunately, it doesn't look like a PDF copy is available at RPGNow! (though others from the line are)

All in all, a solid addition to your gaming collection *if* the price is right. If you don't have any sort of city book or have no idea where to begin to get a city campaign up and going, it's worth taking a look. On the other hand, if you've already been running a successful city based campaign, or already have decent material to draw from for running and designing such a campaign, you might not find much value besides the various random tables the book provides.