Weekend R&R: Realms of Fantasy - To Hell & Back 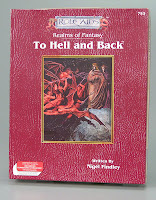 I mentioned last week what could best be described as a buying spree in the months following my initial involvement with Castles & Crusades. Because of it's compatibility, I was able to buy d20 as well as continue acquiring various older D&D and AD&D products. One of the things I stumbled back then was a sale that Mayfair Games was doing on their Role Aids line. This was years after Mayfair stopped producing this line and was clearly set up to sell all remaining stock which they still had in a warehouse somewhere. The books were sold in 'lots' which contained several titles. I had never really seen a Role Aids product before but the price was certainly right and it was 'compatible'. Some people like it and others less so but in all cases, there was certainly enough to mine from.

One of the box sets I received in my order was entitled 'Realms of Fantasy - To Hell & Back'. It was one that had looked particularly interesting since it provided some campaign / setting based material for Dante's Inferno. The box set was simple enough and, admittedly the production values are probably not as nice as some of the other offerings in the Role Aids line. It was basically a collection of 5 settings: Atlantis, Avalon, the Realm of he Fey (Faerie), the pits of Dante's Inferno, and Selene which takes it's inspiration from Ravenloft. The contents were simple enough, there were two books -- one of which focusing on the Inferno and the other detailing the rest of the setting. Basic fold out maps were provided as well as a series of hold-punched pages of monsters. These were hole punched and meant for inclusion in TSR's Monstrous Compendium binders.

The material contained in the books and sheets is good enough but clearly, the Inferno was the focus of the box set. It begs the question if this was meant as a regular sourcebook instead of the box set earlier on in the design process. While I have enjoyed the Role Aids line as a whole, this isn't my favorite. What it does do is remind us that you don't need much material to have a quality setting. Nigel Findley did a fine job with the writing of the material and enough information is there to fuel the imagination for many an adventure. In fact, the beauty of this set is the fact that any of these can be used in conjuction in a regular campaign since these are other-worldly realms.

There is decent value though lack lustre appearances might see this product passed over for other ones. Unfortunately, the only options available for purchase is restricted to the second-hand market. Noble Knight Games sells a VG+/NM copy at $15.00 which is a good price if the subject matter of the box set is one that would interest you. Personally, I believe that this set is best used as a foundation for a new of short-term campaign.