It's been a while since my last review and the game I wanted to review ended up being a bit more difficult to get done than I originally anticipated.  I promised a friend, the designer of the game, to get this done sometime before the end of June and here we are, Labor Day Weekend.  Why did it take so long to do?  Well, we'll get to that...

Iron Age: Council of the Clans is presented as a 'Table-top Strategy Game of Power, Honour, and Democracy.  It was written by Dr. Brendan Myers, a professor of philosophy and author of several books.  The suggested number of players is between 3 and 8 though you could add many more players to the mix but this would certainly lengthen the play time for a game.  The game is social in nature and players have to work together to build an Iron Age community.  Through a bit of political maneuvering, strategy, and diplomacy, each players is trying to improve his or her position amongst their peers to be elected Chieftain.  If a certain player is elected as Chieftain often enough, that player wins.

Sounds simple enough right?  Well, the introductory version of the game is certainly simple but the advanced version has many more variables like buildings to build, specialists, different goods, and armies.  All go to help or hinder a player's total honor which affects the kind of voting power they have for the next round of elections.

In short, it sounds like the game has plenty of potential to spare.

The Basic Version of Iron Age

Honor is very important in this game.  Each point of honor counts for one vote, so if a player has 10 points of honor, they can cast 10 votes when it comes to vote for a Chieftain.  These elections start happening after the second round of play and any player can call one at any point.  These elections are called Landsmoots.  When a Landsmoot is called, each player who desires to be Chieftain has a chance to give a little speech and outline why they would make a fine leader.  Once speeches are done, votes are cast.  If a player is unfortunate enough to have no honor or even less than that, they still get one vote.  What does being a Chieftain mean for the player?  Any player who is Chieftain gets to reassign any food surplus to the clans as he or she sees fit.  It's good to be king.

The winner of the game is the first player who has been Chieftain three times in a row or four times in total.

The Advanced Version of Iron Age

The concepts introduced in the basic version of the game still remain at the core of the advanced version.  That is to say, honor determines the number of votes a player can cast and the victory conditions are the same.  However, in this version of the game, each player starts with a town hall and three buildings which produce basic commodities.  There are twelve buildings to choose from, each producing a different commodity.  Each player will need to keep track of the buildings they have, what foods and goods they have stored, etc.  Like the basic game, there is a requirement to feed your people in order to gain honor.  Each building represents a number of additional mouths to feed.  It is possible to expand the number of buildings in the village which will increase the demand for food.  However, food as well as other commodities will be required to produce other buildings for production, specialist buildings, and specialist villagers.

These specialist buildings and villagers serve different purposes, of course, and their inclusion only serves to diversify the types of strategies various players can utilize to try to win honor, and hopefully victory for themselves.  As opposed to just ensuring that your people are fed, honor can be won by winning battles, producing trade goods for all the people (wealth), giving other players a gift or hosting a feast in their honor, successful hunts, or even certain milestones.  Some of the specialists can also affect one's honor.  On the flip side, you can lose honor by having your people go hungry, wasting resources where you produce too much beyond what you can store or trade, losing a battle, being unable to reciprocate a Heroic Feast, losing milestones to another player, or having another player's poet besmirch you.

Iron Age is a brilliant game that grew out of college classroom exercise.  It has everything a great game should have but is missing what most people expect when they think about games.  The problem with Iron Age is that it will a bit abstract for most people.  As it stands now, Iron Age is available as a book and you'll need pencils, paper, and some 6-sided dice to play.  There is no game board, there are no cards, there are no game pieces, and the dice are, as I mentioned, not included.  As such, I actually had some difficulty in getting players to try the game.  For people who know little of games beyond the standard board game, playing a game which has little in terms of tangibility may be a tough sell.

The book is well written and it does contain all the rules, and even some optional ones, to play the game.  While not required, a few examples of play might help the game appear a bit more friendly along with a few play aids in the book itself.

Play aids are not necessary for the basic version of the game but, when I played it the first time, I did notice two things.  One simply was the comfort level of some of the players to speak up and participate in the Landsmoot phase.  This is not the fault of the game but it may put those players who are a bit shy at a disadvantage.  I like to think that this kind of game can also help some people overcome their shyness but it's worth considering since it could alter everyone's experience and perception of the game.  The other is the honor system in the basic game.  Since there is only one way to gain or lose honor, a skillful player (who was equally a bit lucky) could lend themselves in a position where they gain enough honor to make voting irrelevant.  In one of the games I played, I had amassed enough honor to outvote the other three players combined.  This is not an issue with the advanced version of the game and one of the optional rules even suggest a winning condition for achieving a total number of honor even if the Chieftain winning conditions have yet to be met.

There is another game which came out in 1974 which proved to be a bit more abstract and also required the use of paper, pencils, dice as well as a bit of imagination.  That game has the distinction of being the world's most popular role-playing game that we know as Dungeons & Dragons.
While it was hard to find some willing volunteers at first, those who had experience with other types of 'abstract-games' who had a chance to read through my copy of the book were quickly enthusiastic about the game and saw its potential.  As gamers who play tabletop RPG's, they also saw an opportunity to 'ham it up' so to speak and have fun playing the role of a candidate during the Landsmoot.  While the game may not come in a flashy box with a bunch of tokens, board, or cards, the most important thing is there and it is complete.  Of course, while the game works perfectly well, with some paper to keep track of things, some people who already have many other games may take this one step further.  For instance, it would be a simple matter to print up a bunch of cards to represent the various foods and resources and even cards to represent the buildings.  Easy to do and this could make keeping track of things a lot simpler.  Add some counters of sorts, and you have something that other players who need a bit more to follow and make participating in the game a lot easier.  At some point (once I secure the author's permission), I will post up material like this for others to use.

The game itself promotes collaborative play as well as the art of communication and negotiation.  While there is a luck factor inherent in the game, success or failure largely depends on how one plays the game and the decisions made.  There is one other EXCELLENT thing about the game and for this reason alone, I recommend my readers to take a closer look: the price. 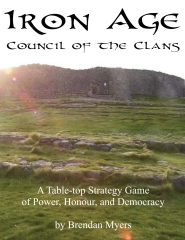 While the physical copy of the book will cost you a mere $9.95, you can get a Kindle edition for  only 0.95 cents.  The Kindle edition has no art and no extras but the text for the game itself is complete.  The physical copy is a 62 page softcover that includes some art, some nice classical quotations, as well as an essay on collaborative gaming.  The point is, at only 0.95 cents, the text is inexpensive enough to check it out even if you are only curious.  Beyond either option, the author has made a tracker available for use for players of the game.  This is free and will make things a lot easier for players of the advanced version of the game.

As it stands, the game is easy to learn though mastery is a different matter entirely.

For the Kindle version of the game, you can get HERE from Amazon.  If you are looking for a physical copy, you can order it HERE. Finally, if you get either version, you can download and print copies of the tracker HERE.

What does the future of this game look like?  Well, a lot of its success so far has been through word of mouth.  Many people have played the game and it continues to be used as an educational tool as well.  Talking to Brendan Myers, it sounds like it may only be a matter of time before we see a new incarnation of the game which may prove to be a bit more accessible to a wider audience.  Perhaps something will come through a crowd-funding campaign or maybe something entirely different.  It is a solid game and one worthy of any who has an interest in politics, diplomacy, and critical thinking.