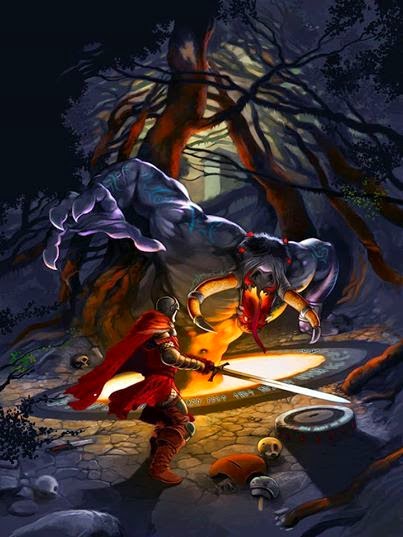 Troll Lord Games have had several successful Kickstarters in the past and with the help of fans, both older fans and newcomers to the game discovering Castles & Crusades for the first time, have made a difference.  The game started with the fans and an idea to return to a certain style and flavor of gaming and its continued success is directly a result of them too.  Naturally, the same could be said of many other games in this smaller gaming marketplace; old favorites like Chaosium's "Call of Cthulhu" RPG will never fade away.

A couple of years ago, Troll Lord Games did try and expand upon their game.  Not in the sense of additional supplements or campaign modules -- they never stopped doing that. Instead, they wanted to add a splash of color to the pages of some of their books.  At they time, TLG did another Kickstarter to help fund the production of the Player's Handbook heading into it's fifth printing go full-colour.  The campaign, of course, was a success and the book ended up being quite nice.  Truth be told, I never had an issue with the books being in black and white.  My first edition D&D books were all black and white and the second edition books (the initial printings) went with blue text and graphics with some full color plates thrown in.  Honestly, I would have been happy with black and white but with some color plates throughout the book.  One thing is for certain though, the reasoning behind the decision to go full color was simply because it has a tendency to stand out more -- especially when put along side to some of the other full color RPG book offerings by other companies in the market.

At the time, fans figured that a full-colour M&T and perhaps even the CKG would be soon coming.  As it turns out, not exactly.  I'm certain that the intent was always there but, given that the Player's Handbook is the biggest seller for the game because, like dice, everyone needs it to play, the other two 'core books' in comparison sell much more slowly.  When the fourth printing of the PHB sold out, TLG still had the corresponding print versions of the Monsters & Treasure book and Castle Keeper's Guide still in stock.  By the time that the 5th printing PHB sold out, the CKG and M&T were finally at a point that they too needed to be reprinted.

And so, here we are.  On April 29th, Troll Lord Games had announced a new Kickstater to reprint all three core books and the campaign is fully underway have blasted through the initial goals.  The initial goal set at $15,000 was simply to reprint the three books with the Player's Handbook in colour.  There are of course stretch goals and two of them are significant goals.  They are to do the other two books in colour as well.  As I write this entry, we are less than $1200 away from the M&T being done in full colour and that's a lot of pictures.  That particular stretch goal is set at $25K.  The biggest one is set at $45K and the good news is that the funding drive still has just over three weeks left to go and it's trending well.

You can find it, HERE.

So, you may ask yourselves, why back this project if I already have the books and these are just new printings and not an edition change?

Well, true enough, there won't be anything new in this book.  At most, some lingering errata from the PHB and M&T might be resolved though, by now, we are mostly talking about clarifications being put in.  The Castle Keepers Guide on the other hand has only had one printing so it's possible that the lion's share of these corrections will be going in there.  However, the font is getting changed to be just a tad larger.  Many have commented on how the font seemed to be a bit on the small side and while some don't have a problem with this, others did.  The whole point is to make the books as attractive as possible with these new printings and, with the font change, textual clarifications, and the layout alterations, the PHB is projected to be close to 192 pages compared to the last printing's 144.  The M&T and CKG will similarly grow in page count if only to accommodate the font change.  Of course, the three books in color will surely make them stand out.  The last PHB which was in color was mostly good but the paper used didn't showcase the colors as properly as they could have.  Apparently the paper used will be changed to something that will permit the colors to stand out more than the last printing did in order to truly have these three books stand out.  Many fans of the game have acted and continue to act as sort of ambassadors for the game and having better looking books in hand will help make a better impact.

Doing this is an important stage for Troll Lord Games in order to grow their game further.  These amounts being sought are not only to do the books in colour but also to do larger print runs than they've been able to do in the past.  It is also significant to point out that the game is coming upon it's 10th anniversary and in recognition of this, some of the other stretch goals aim to reprint some of the modules that helps launched the company back in 1999 like Mac Golden's "Fantastic Adventure".  Up to know, it hadn't been converted to C&C and has been long out of print.  This module will printed in limited quantities for the backers that qualify -- all signed by the author.  The same is planned for the "Vakhund" module and there is more to come (though not revealed yet).

Of course, if you are already sold on the idea, what might interest you further are the possibility of leather copies of the books.  Having personally bought many different printings of the books over the years, having what is looking to be a 'definitive' printing in leather is awfully tempting.