Time To Drop The Hammer on Mythos! 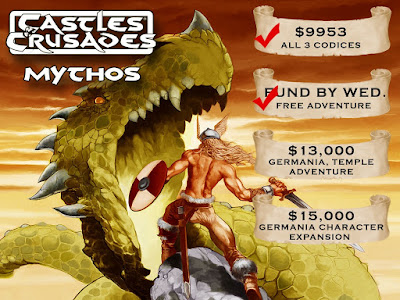 The Castles & Crusades Mythos Kicktarter is well under way, and with only 10 days left, it's time to drop the hammer on this one.  The goal of this campaign is to bring to print three hardcover books which is a blend of historical, mythological, setting material for your game -- be it C&C or other compatible FRPGs.  To date, they have brought two of this to print.  The first of these was the Codex Celtarum, and the second, the Codex Nordica.  Both books were very well received and I've reviewed both in the past.  These can be found HERE and HERE.  This crowdfunding campaign brings three more books to the fold.  These are the Codex Germania, the Codex Slavorum, and the Codex Classicum.

The Codex Germania focuses on the myths of the ancient Germanic peoples and their worldview during the age of the Roman Empire.  It is an excellent companion book to the first two books already released. The Codex Slavorum presents a change of focus and brings to light the diversity found in eastern and southern Europe.  Finally, the Codex Classicum are the ancient Greeks, their mythology, and contextualizes them with the Romans and Etruscans.

Of course, the great news is that these have already been funded and pretty much funded the first day.  We're looking for stretch goals and some of those involve expanding the available material further.

At the $99 level, you get all three books (PDF and in print) plus a bunch of stretch goals as they are unlocked.  These already include expanded content for the fist book, a stand alone adventure, and some bookmarks.  There was another stretchgoal for early birds and another bonus goal if 201 backers support the project before Sunday evening (the 9th of August) at midnight.

If $99 is too steep or you are just not interested in all three books, you can always pledge at the $1 level and add-on which ever book(s) you want but doing so will mean ineligibility for the some of the bonus swag.

In any event, I strongly urge you to check it out.  If it's anything like the previous two books in the series, this books will be a great addition to your gaming library.