This weekend was a good and relaxing weekend but I relaxed a bit too much I'm afraid.  My planned Weekend R&R took a bit longer to get to than originally planned.  The good news is that I got to do play in an epic game of 'Samurai Swords' (Milton Bradly edition) which I had not done in about 20 years.  I also got some painting done.

However, having received my limited cover copy of Far Trek in the mail just a couple days ago, and having read it cover to cover -- I knew I had to write about it as soon as I could because it's just that good.  And once again, it shows you can have a perfectly great game without the need to take up pages and pages of to layout the necessary rules and information needed to play.

To be clear here, this version of Far Trek is a new and expanded version of the game and the game had been available for some time before.  A friend introduced me (and others) to the game as we were looking to do some sort of Star Trek based RPG game.  At the time, we looked at doing an Open D6 type game (using the Mini Six ruleset to get us started), the original Prime Directive game, and Far Trek was tossed in as options.  Prime Directive won the day but, Far Trek stuck in the back of my mind.  By chance, a physical copy of the revised book with the fantastic and aged looking 'retro' Star Trek cover was being offered at cost for 24 hours from a POD.  I seized the opportunity and ordered a couple of copies.  The creator of the game does not make ANY money of this property since it is based on the Star Trek universe.

There have been a few Star Trek RPGs over the years starting with 'Adventure Gaming in the Final Frontier' by Heritage Models (1978) with the most recent effort having been released by Decipher Games under the CODA system (2002).  A favorite of many, you have FASA's 'Star Trek Role Playing Game' which remained the 'go-to' Trek game for many years when it was released in the early 80's.  Of course, there have also been the 'unofficial' games such as 'Starships & Spacemen'.

I am certainly not an expert when it comes to all these different Star Trek games.  I am vaguely familiar with the CODA system and I recall bits from FASA's offering when I first came across it in the late 80's but, that's about the extent of it.  However, I *do* appreciate Star Trek and was a fan of the original series, movies, and the later series.  I will always have a special fondness for the original series which is part of the reason why Far Trek stands out for me.

Far Trek, simply put, is a love letter to 'classic trek'.  The game is simply a great pastiche for the original series.  The system itself was originally based on the Microlite20 system as 'Where No Man Has Gone Before' which proved to be a great foundation for Far Trek which uses a 3d6 mechanic instead.  It keeps the rules simple enough and does a great job at capturing the spirit and feel of the original series. 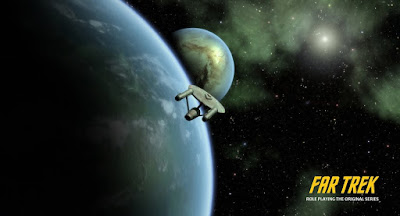 The book is broken up in 8 chapters with an additional 5 appendices.  Chapter 1 provides a quick introduction to the game, the Federation, and the Prime Directive and dives in Chapter 2 which deals with character creation.  There are 3 basic classes to the game, being Gold Shirts, Blue Shirts, and Red Shirts, and 4 attributes (Strength, Dexterity, Intelligence, and Charisma).  Each character has skills and talents to round them out.

The rules themselves make up less than ten pages for Chapter 3 where as basic equipment can be found in Chapter 4.

The largest chapter in the book is devoted to Starship Movement & Combat, but like the rest of the book, the rules and aids in this section are clear, concise, and relatively simple in comparison.  The following chapter, titled 'Enemies & Allies', will help populate the stars and various encounters but the last two chapters of the book provides a wealth of tools to help create your adventures.  You have a host of tables to create new worlds and systems as well as aids to create encounters with enough variety to keep things fresh.  Well... new but familiar in a very 'Trek' manner anyway.  Along with this, you are also presented with a series of charts to serve as your 'Episode Creator' for the game.

Of course, some people may feel that all of this isn't enough but thankfully, even here, there is an attempt to make those people happy.  A third of the book is appendix material which gives you options such as new classes, creatures, and detailed information on Klingons and Romulans.

The books is a small, 6x9 book with a 148 page count but the quantity of information and the great system found in its pages makes a campaign to that final frontier on your own 5 year missions so much more accessible now.  The fact that the PDF is completely free is a BIG bonus.

If you want to continue to hear about development on Far Trek and find where you can grab the free PDF, you may do so HERE.