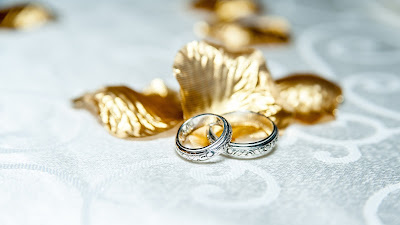 This year's GenCon was a special one for me.  It was my second GenCon that I attended but this year's convention was also my honeymoon.  On July 25th, I married my significant other; we had already been together for about 12 years.  The marriage itself seemed more of a formality but the reception (read party) afterwards was fantastic.  It was great to see family and friends celebrating this milestone with us and, after a couple days rest, we embarked on a road trip to Indianapolis.

My wife is a geek and, while not certainly a big gamer, she loved her experience at GenCon the previous year and wanted to go back.  She loved the idea of GenCon being our honeymoon destination so we planned the wedding accordingly.  The past few months have really been busy though but everything ended up being very successful. Being our second time at GenCon, we avoided some of the pitfalls the first time around and made sure our experience was a far better one than our first.

One of the decisions we made, since we were doing this as a road trip, was to do the journey in two days as opposed to a continuous marathon.  We opted to do a stop off at a stereotypical honeymoon destination -- Niagara Falls.  We left early (VERY EARLY) on Tuesday morning and made good time from Montreal to Niagara.  Arriving early afternoon, it gave us a chance to visit the falls, take the iconic boat ride (and get soaked) by the falls, as well as visit the town.  The town was very 'kitsch' but appealing nonetheless.  Probably because we were on our way to GenCon.  We had a nice dinner and enjoyed a good soak in the pool and hot tub. 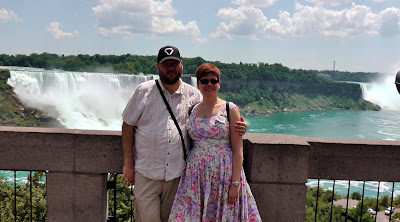 The following morning was another early as we left from Niagara and crossed into the US to complete our road trek to our ultimate destination.  It was a longer drive and we arrived very late afternoon.  We took the time to check in and then go to the Indiana Convention Center to pick up our badges.  That proved to be the only hiccup of our trip but one that couldn't be avoided.  As residents outside the US, there is only the 'Will Call' option to pick up the badges; they just won't do any mailings outside the US and that's a shame.  The line up when we came to it in the evening was entirely too long.  Coupled with the fact that many residents of the US prefer to save the $10 instead of having badges and tickets mailed out to them, waiting over an hour in line just goes to show how somethings still need to be improved.  We opted to go out to supper and come back later.  When we did (it was well past 9pm by that point), the line was just as long but seemed to be moving quickly.  We waited only about 45 minutes.

The next few days were a blast though and, instead of trying to book every hour of my day (like I did last time), I spaced out my events and made sure my evenings were free.  I mean, it *was* my honeymoon after all.  I got into three games... two were Amazing Adventures games and one was a Castles & Crusades game.  The Amazing Adventures ones I played were both run by Jason Vey, writer of the game, and I had a blast with it.  It was the first chance I actually had to play the system despite owning it for a couple of years now.  The Castles & Crusades adventure was particularly fun though.  We had something like 20 players and it was, as expected, totally a meat grinder.  I had a  glorious death as threats came in at us from all sides.  Stephen Chenault from Troll Lord Games ran us through that one and my character had a glorious death! 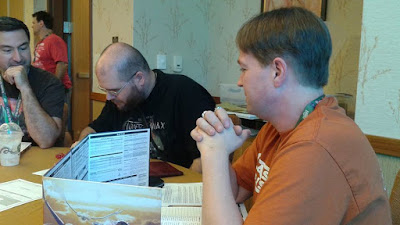 I also sat through a couple of demos, did a couple of workshops, and the wife and I did some tourist type things like the Indy Brew Tour.  Indianapolis has a lot of microbreweries and, it's not everyday one gets to tour one.  In this case, the tour takes us to four but, in all honesty, the tour consists of going to brewery to brewery and sampling many types of beer as well as buying and drinking even more.  It was FANTASTIC and we'd happily do the tour again.  :)

One of the highlights during the trip is seeing some friends again.  We were fortunate that we shared our road trip with a couple of friends who were also part of our wedding party.  However, we made some friends last year at GenCon -- namely the gang at Troll Lord Games.  We were invited out to go drinking with them last year and this year was very much the same thing.  The guys there are a great bunch to hang out with and we were constantly popping in to say hi to them while they were working the floor in the exhibit (vendor) hall.  They really are a great bunch of people and seeing them again, sharing a few drinks, really helped make the trip worthwhile. 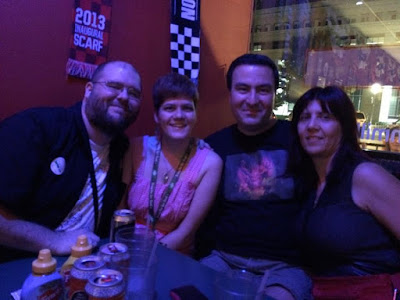 Between Wednesday evening and Monday morning, we enjoyed the hospitality of Indianapolis and our departure on the morning of the last day was a bittersweet.  It was nice to know that we would soon be home but we were also sorry to see this year's GenCon come to an end.  We decided to end the trip on a high note though and detoured through Cleveland to take in the Rock & Roll Hall of Fame.  While in Cleveland, I also got a chance to get together with a friend I met a few months earlier on Facebook.  It was a pleasant stop and a nice break from the road. 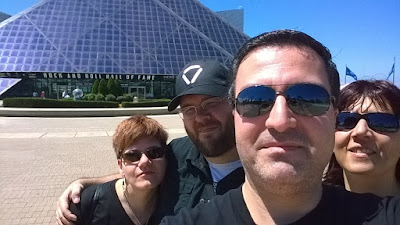 We continued on that evening till we hit the outskirts of NY state for an inexpensive motel for the night only to continue and complete our trip the following day.  We were greeted with Montreal rush hour traffic -- a sobering reminder that we have come home.

The trip wasn't without its costs though.  A crippled Canadian dollar made the exchange rate even less favorable than we had initially planned upon.  I started the trip with a 'shopping list' of sorts and managed to come back with more than I had planned.  Thankfully, nothing really excessive save a pricey Iwata air compressor but buying it there meant I save close to $200 Canadian otherwise.  It was a great buy and I've already put it to good use.

It was a great trip overall and between the Falls, GenCon, and the Rock Hall, a trip whose memories I will treasure.  The wife and I as well as my traveling companions have already begun discussing the possibility of a trip back next year.