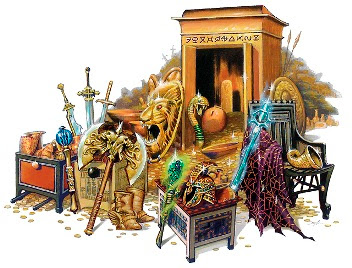 I don't know how it happened but I really lost track of the last few months on this blog. In fact, the past few years, this blog has been a bit of a symptom of a greater problem and posts have been few and far between. Naturally, I'm keeping busy and I constantly have projects on the go. All I need to do is look back at 2017 and 2018 to see what I've accomplished with Arcana Creations and its imprint, Arcana Elements.

When I first started this blog in October of 2009, things were vastly different for me. I just formed Arcana Creations and started working with John of Brave Halfling Publishing back when the OSR was still relatively new. I adopted Castles & Crusades as my FRPG of choice and I was running a regular campaign. At that point, I had already been gaming for over twenty years and I cut my teeth on a mixture of 1st and 2nd edition AD&D alongside the venerable BECMI D&D sets. With that, I had equal parts of fun with other diverse systems and genres from a variety of publishers.

In short... I loved gaming and, while there was a 'burn-out' of sorts after the shine of 3rd Edition wore off, it was Castles & Crusades that rekindled my love for the hobby and got me regularly gaming (both running and playing). More than that, the online community around this game (and others) were very engaging and I found myself getting involved with them. I was sharing ideas and participating in discussions. Those actions is what led me to doing a bit of work with John Adams and shortly after Arcana Creations was born.

Other aspects of the gaming hobby I had never explored such as painting and using miniatures became an extension of my hobby and, very recently, so did the world of 3D printing using FDM printers!

There were other changes along the way. New editions of various games have come and gone and some of my tastes have changed along the way. People have changed too and somehow, things got a lot more polarizing in the past couple of years. Circumstances and priorities has caused existing campaigns to be put on hold, or end altogether. More importantly that love and thrill I've once had is gone -- possibly robbed by a host of things that have plagued me personally or that I have simply witnessed or read about one too many times.

What does this mean and how does this relate to this blog?

In short, I've taken a step back in order to get a better look at what lies ahead in order to rekindle what is important to me.

Arcana Creations is still my main focus and I'm busy in fulfilling the recent Kickstarter campaign for Ballista. Things are going to plan on that end and I do enjoy working on that material. It's always very satisfying to see something come together culminating in some physical you can hold in your hands.

Beyond that, I have three hobbies that are interconnected (for me) where I need to devote time they deserve for me to properly enjoy them. I have HUNDREDS of miniatures to paint and so many models I want to print up (and then paint) -- all for my game. Above all, I want to come to a place where I'm comfortable at running a small and carefree game. I don't know when this last part will actually end up happening but it's the goal.

And... I want to write about it and share my experiences as I try and rekindle my love for this hobby. This is where 'Under Siege' comes into play. I used to enjoy writing reviews... sharing my opinions... and so on but sometimes that is the hardest part. I'm hoping what I end up doing and going through will help others who are also juggling a full time 9-5 but struggling to find time to devote to their hobby after all their other commitments are out of the way. Just as important, it's about a routine which I need to try and set down to get things moving again.

Anyway, I'm hoping for a lot of good things related to the hobby in 2019 and I'm eager to share this experience as well as other things of interest I happen to be doing or come across.