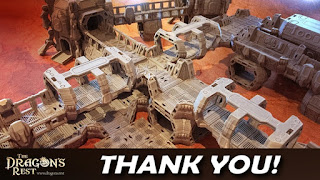 I have two 3D Printers at present -- a Prusa i3 Mk3 which I've owned since Spring of 2018 and a Creality Ender 3 which I put together during the holidays. Both have been working at printing up some goodies like some great terrain pieces I'm planning to use for Kill Team. Working with the Ender 3 has been a different experience than my Mk3. Let me say that I *love* the reliability of my Mk3 and it has printed countless of hours with a success rate (out of the box) of over 96%

When I bought my Mk3, it wasn't cheap. Because I needed to put it into production almost immediately and because I didn't want any possible downtime putting it together and dialing it in, I chose a fully assembled model. That cost me $999 USD plus and additional $100 USD in shipping. On top of that, there was customs charges. After the USD to CAD exchange rate, it was no small investment. Given what I got out of it, I don't regret the purchase and I would love to have another.

Realistically, this was not in the budget.

A newer printer (which wasn't on my radar when I initially bought the Mk3) was, and this was Creality's newest offering -- the Ender 3. As I mentioned recently, I managed to pick it up with a flash sale on Amazon making it already cheaper than it normally is (a little over $200 USD). In truth, I wanted to have a second 3D printer for a while but I held off on the Ender 3 for a few reasons:

The Mk3 has spoiled me in many ways but no printer is quite at the consumer level where you can press a button and 'go'. But I feel the Mk3 does get pretty close to this level of ease. It was a bit different when it comes to the Ender 3. As a kit, the Ender 3 isn't too difficult to put together but invariably, there will be issues if you aren't careful when assembling the printer as you need to make sure the frame is perfectly squared to the bed. Just a tiny variance can affect the quality of the print, even if it 'looks' straight. Some of the pieces used are a bit on the sub-standard side and some choices boggle the mind. The extruder in the kit is plastic and wear and tear is a valid concern. The bed is frequently warped which makes bed leveling a problem of course and, since you have to manually do this, it can be a frustrating start into the 3D printing hobby.

The biggest one for me was the issue with thermal runaway protection having been disabled for many of these earlier printers. Fortunately, this is ONE thing that has changed recently. Newer Ender 3's have been going out with this enabled. Experiencing thermal runaway when this is disabled is a sure way to get a fire happening and NO ONE wants that!

With the price being even lower than usual, I was able to order the Ender 3 as well as get a glass bed to resolve the possibility of the bed being warped and a metal extruder to replace the stock plastic one. At that price, it would have been possible to buy FOUR Ender 3's for the cost of my Mk3.

With that cost savings, there is a trade-off when it comes to convenience. Dialing in the Ender 3 seems more of an art than anything else sometimes and if it wasn't for previous experience, it might have taken me much longer to do. For the newcomer to 3D Printing, I'd would be happy to recommend the investment but I'd also stipulate that they need to sit through a lot of videos in terms of properly assembling one of these kits and how to properly set up the printer for optimal use.

BOTH of my printers are configured as they should be and right now I'm printing some Sci-Fi terrain. As it turns out, this isn't only for me -- a friend asked me to print up some pieces to replace his Space Hulk cardboard tiles. I've printed a couple of test pieces and I'm liking how they look so far: 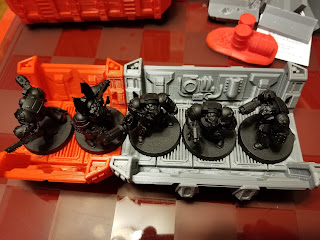 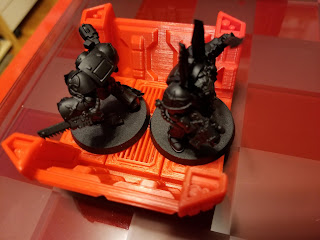 The terrain is part of a larger set which I stumbled upon Kickstarter a few months back called Outpost: Origins by Dragon's Rest. The models are extremely detailed and look fantastic! They were also great value given the price on Kickstarter though looking at their website, not everything that has been released to backers is available for purchase yet. I assume they will come when all pieces have been made available.

At this stage, I'm printing various pieces for different configurations. The first two (the red and silver) were only the beginning as I am looking to see how closely I can match the Space Hulk maps for tabletop play. Worse case... these are going to become part of terrain for Kill Team.  ;)