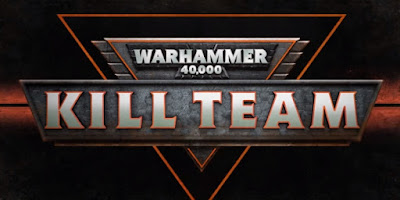 Well, there are two things that have recently happened that I'm tying together. Sometime back in August, I picked up the new Kill Team rulebook that was released by Games Workshop. Long time readers of the blog may recall that I've skirted the line with their company and their products before. Frankly, the frustrate me to no end and their business practices did have me cash out of 40K about a year after I got into it. One of the reasons I got into some of their stuff in the first place was because it was one of the Lord of the Rings kits that got me started into painting miniatures. For the record, it was a pack of Goblins of Moria. Their prices have also increased in the past couple of years and, in my opinion, some of their stuff is just too damned expensive.

Kill Team is a different beast entirely though. The investment you need is relatively small compared to other product lines they carry. Better yet, if you are someone who is a fan of Warhammer 40K, it gives you an inexpensive opportunity to play with other units outside of the usual army you happen to be fielding for your games at the time. I picked up the book and, while I still had some odds and ends to put together a Kill Team without spending another dollar, I chose to pick up something I wanted to try out and play -- the Tau.

Outside the Rulebook, the game doesn't need to cost you that much to play. The Core Rulebook is $40 USD where-as a team will typically cost you in the $30 - $60 USD range. Aside from terrain to game on, you actually don't need much of anything else to pay. Naturally there are plenty of ways to spend more money including boxed 'Kill Zones' which essentially give you terrain to play with but not all that necessary if you already have some or prefer to make your own!

The Tau happened to be inexpensive for me and I've always like the look of these units. I started painting my units (a non-standard scheme) towards the end of August. They still aren't finished and I haven't touched since the end of August either.

When it comes to terrain, I have chosen to print my own terrain. I have a Prusa Mk3 which has been in steady use since May of last year and, less than a month ago, I assembled a new printer. This was a far more economical option as I took advantage of an Amazon Prime Flash Sale and picked up an Ender 3 by Creality. It still needs a bit of work but it is printing well enough and I'm getting decent prints off of it. With the two printers now working, I've started printing pieces to make my own set of terrain to use in Kill Team.

First and foremost, I've been printing some sci-fi crates I found on Thingiverse: 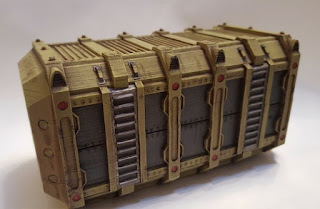 I've got three printed now and I'm printing a variant with no doors. I also printed a whole bunch of these (they also served as some test prints for the new Ender 3): 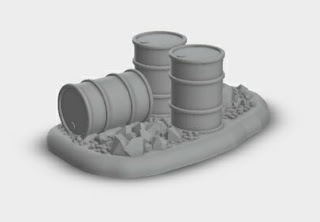 But I'm also planning on printing a bunch of these for the terrain: 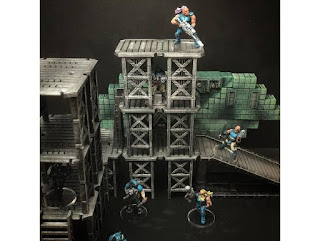 With some crates, barrels, scaffolding, and a couple other odds and ends, I think I've got the beginnings of something solid for terrain to do a few Kill Team matches on. Still a bit of printing to do and I'm going to consider a few more things to print to fill out a good sized area but, while some of this stuff is printing, I'm hoping to finally get back to and finish painting my Kill Team stuff during the course of the next few weeks.