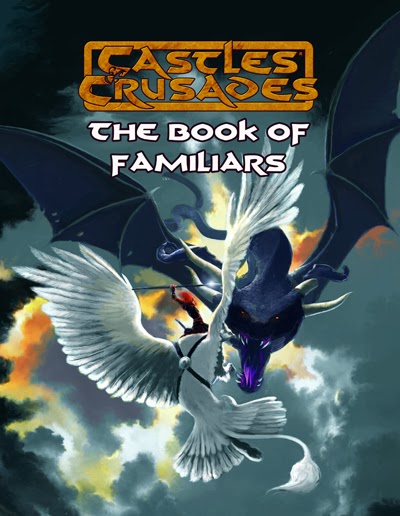 A week ago, I and others like myself who pre-ordered this new supplement for Castles & Crusades got an email letting us know that the PDF would be sent to us in the next 'few days'.  At first I assumed this meant for the weekend or the start of the week.  Guess it took a few more days than that making this Weekend R&R post a late post or an early one depending on how you look at it.

The Book of Familiars is not an entirely brand new book it was first published as a d20 (3.5 edition) back in 2004 after a couple of challenging years to get it out.  Once it was released, it was warmly received by fans as a book unique enough to stand out as a third party product.  A few years later, WOTC announced 4th Edition and, like many of the d20 books available, this book quickly fell aside. 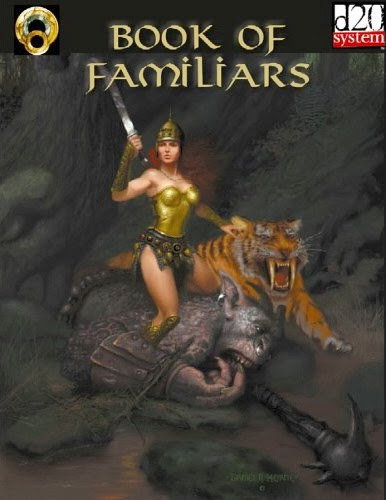 Like many third party publishers, Troll Lord Games had a few decisions to make and, fortunately for them, they had worked to develop Castles & Crusades which began to come into fruition in 2004 as well with the release of the Castles & Crusades Collector's Box.  By 2007, TLG had released several other books for C&C and the game was gathering steam.  Enough that they could focus more on that line of products and allow the older d20 stuff to go out of print.  Other companies, like Paizo, also developed the Pathfinder system which builds on 3.5 and Pathfinder became an instant hit among gamers which drew other third party companies to develop materials for that game.

Honestly, for Pathfinder fans, this isn't so much of a loss in my opinion.  The d20 version is still accessible and available in one form or another.  It's relatively easy to track down a second hand copy of the book and some retailers may even have an older but new copy still on their shelves or available online.  Sadly, there is no PDF version available for it anymore.

On the other hand, it is a nice addition to the C&C assortment of books.  In this area, it seem like the company has finally hit its stride.  Not including different printings, they have over 10 hardcover books released in the line and a large assortment of adventure modules.  They have released box sets and are expanding their game base with titles such as Amazing Adventures.  Being based on the d20 game system and with its design, it retains compatibility with other d20 products as well as older editions of D&D.  But, as far as branded books are concerned, most aren't as specialized as this book happens to be.

Castles & Crusades has several monster related books, a couple of general rules and rule option books, and some setting oriented books and adventures.  The Book of Familiars is best considered as an optional extra.  The concept of having animal companions isn't necessarily new but the game tends to focus on the archetypal wizard or witch with a familiar (think a cat, toad, or an owl for example).  Familiars are something special and not just a simple pet.  A lot of games don't tend to explore or expand upon this aspect and this is what made the original Book of Familiars stand out.  The book gives options on having a bonded familiar no matter what class you happen to be and, as a result, these are designed and tailored for those classes.

So... what exactly in the book?  The book spans 208 pages and consists of 13 chapters.  The first chapter gives a concise overview and explains how to introduce these rules for this sort of play into your game.  Actually, there are two ways you can go about this for the characters.  The first is through Advantages which were introduced in the Caste Keeper's Guide.  On the other hand, if you do not use this rule option, you can also allow a player to sacrifice experience points to purchase the ability to gain a familiar for their character as well as expend experience points to further empower these familiars.  Either method will work very well and, depending on your campaign, some players may even think twice about trading hard earned experience points in order to gain these interesting perks.  The remaining 12 chapters are devoted to each class (Paladins and Knights share a chapter) detailed in the Players Handbook.  Beyond these chapters, you have 4 appendixes.  The first details new animals for C&C and the second gives new monsters.  The other 2 appendixes detail new magic -- spell as well as items and artifacts.

As for the book itself, the layout is simple enough and cleanly set up with art and tables adorning its many pages.  The past few releases for C&C have resulted in a look which has distinctly become a trademark style for the company along with the artists which are regularly employed for these projects.  If you liked the look and artwork of recent books, then it's a safe bet you'll like the presentation of this new title.

But the book isn't perfect.  While TLG certainly has a better track record when it comes to editing their books there are two issues with this particular book and both seem to stem from hold-overs from the previous d20 version of the book.

While many gamers will know what a 'Dire' creature is, there is no such classification in C&C.  Just doing a search through the PDF will allow you to find a multitude of Dire entries.  This may not have been so bad had this information been included in the Book of Familiars.  Otherwise, many entries (and not just the dire ones) have an asterisk when refer you to one the appendix A or B and sometimes even the Monsters & Treasures book.  However, often these searches will yield nothing at all.  Considering the amount of tables and entries which have asterisks, this is a problem.  This is an unfortunate problem but it shouldn't be a problem for most people.