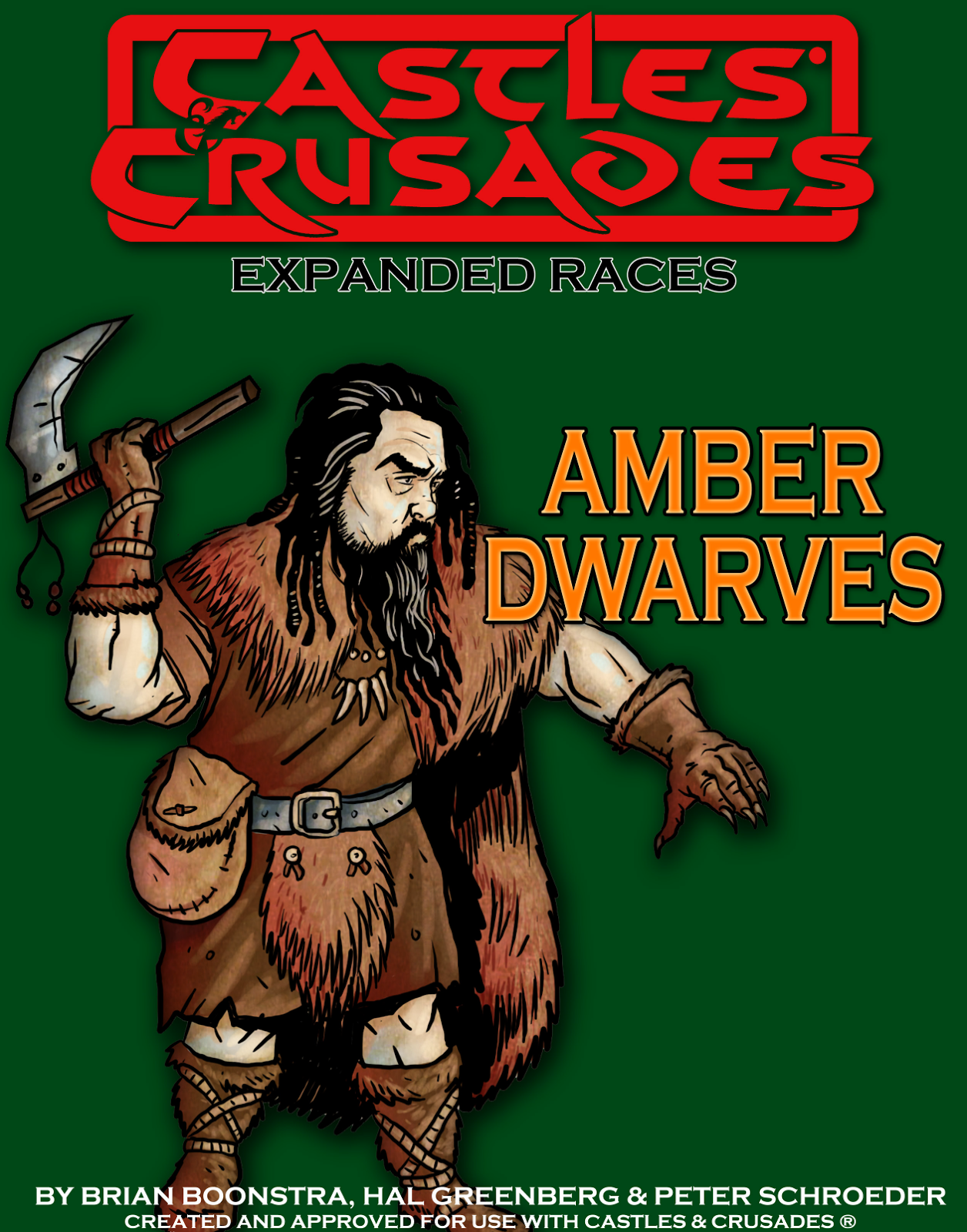 This week, something short and sweet ... a little supplement for Castles & Crusades from the Expanded Races series published by 'Christina Stiles Presents'.  This represents the third in the series which was initially called 'Fantasy Races Unlocked' but changed to 'Expanded Races'.  Personally I prefer the former series title but only by virtue that it's easier to find.  Doing a search for 'Expanded Races' will bring up a number of additional hits.  But I digress.

As I was relaying, this is the third and almost a natural step from the previous 'Granite Dwarves' release (I reviewed that one HERE).  Where as the Granite Dwarves were an arctic/tundra based dwarven sub-race, Amber Dwarves are from a much warmer, jungle climate.  Like the polar dwarves, the though of some tropical dwarves may just not seem like much for the average gamer.  Thankfully, a well thought-up write up for the concept should instantly sell it to most gamers with imagination.  I mean, if TSR was able to sell us the setting concepts of Spelljammer and Darksun, it shouldn't be too hard to stimulate inspiration to use them.

I confess that, at first, I didn't think much of the concept but since I do genuinely enjoy the series, I did want to pick it up.  Now, I want to put them into play and and adapt them to some of the Freeport ideas that have been building up in the back of my mind. Or maybe revisit and modify some classic TSR modules that explore tropical islands and jungles.  But that's how I'd tweak it and maybe that's what some of us need to do to really take advantage of these.  Just adapt it slightly in order to use it.
Sometimes you have something on hand that just 'works' with some of these ideas presented in the 'Expanded Races' series.  The release of 'Granite Dwarves' is a perfect example and it could be paired up perfectly with one of Arcana Creations releases, 'The Trick on the Tain'.  So much so that it's still bundled together and available HERE in PDF.  Naturally you can still get them separately.

As far as this release is concerned, like the previous releases, it follows the same format.   You get a detailed write up about the Amber Dwarves ... what the look like, their personalities, their affinities, as well as their environment.  What is more interesting and the draw for this series are the Racial Traits and Abilities which are different from 'traditional' dwarves and in many cases offer new abilities that replace the traditional ones.  Of course, some of these are completely optional but they do really help make this sub-race stand out.  Like the last release, this one also presents a couple sample Amber Dwarf characters, tips on encounter with them, and a couple of new creatures for the Jungle.  All this comes in a 6-page PDF though 2 of them are the cover and the credits/OGL page.  Still, 4 pages of material with a bit of art which is nicely laid out makes it an interesting and small supplement if you are looking to spice up your game.  The only thing I didn't like was the colors for the cover but that's more of a personal taste thing since it is well done.  Green cover with the red C&C logo seems out of place compared to the previous two releases and their predominantly white covers.

On a positive note, the supplement sells for half the cost of a cup of coffee at Starbucks ... actually a bit less *BUT* at the time that I'm writing this, this and the rest of the series is half off!  Yes... just one dollar.

If you already have the previous releases but haven't gotten around to picking up Amber Dwarves, you can do so HERE.  If you want to see all of what's available instead, go HERE instead.