Wow.  Way back in 2011, I started up a campaign published by Troll Lord Games.  At this point in time, the 13 part saga has yet to be completely published but with only one part remaining, TLG has managed to put together an impressive series of adventures.  While many others love the series thus far, I was never entirely satisfied with it given the tastes and preferences of my players.  So, as I started to run these adventures, I also went about changing and streamlining them to meet MY needs and I thought I would pass on what I did to my readers.

Prior to Assault On Blacktooth Ridge (A1), the Rising Knight (A0) serves as an introduction to the region but not strictly necessary to the series.  It does however set the tone to the rest of the modules that follow.  I started with A0 and when I ran it, I made next to no changes save to the maps themselves.  I managed to find an old copy of the first level of the dungeon: 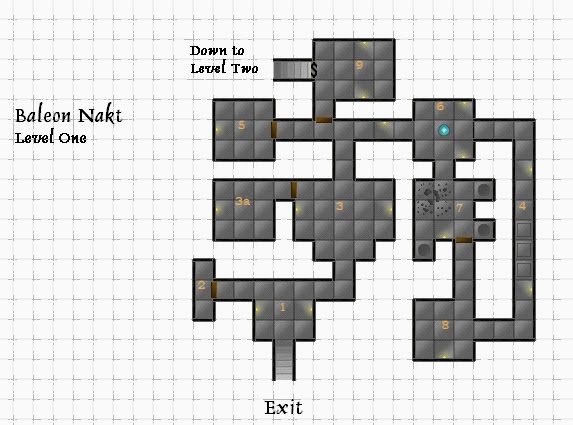 Assault On Blacktooth Ridge on the other hand was a bit more detailed and a lot of time could be spent exploring and interacting with the locals.  Since I ran A0 beforehand, I was more comfortable of throwing the players in the thick of it.

At the start of A1, the characters were only getting settled in Botkinburg when I decided to have the Redcaps do a large raid on the small town.  The party rallied and defended the town and successfully fought off the Redcaps.  With the band defeated, an emergency town meeting was called and the party was recruited to seek out and put an end to the threat.  This really helped kick off the adventure with a clearly defined goal for the players.

A couple of clues and a bit of exploration later, the party found it's way to Kruggle's Lair, and there, a couple more clues to help them find the Varlog and those responsible for the raids. All the other areas detailed with additional encounters, while interesting and fun, I mostly did away with in order to focus on the Varlog.

When it came to the Varlog, I also chose to trim it but only by a bit.  I kept some of most of the key encounters and areas but did away with some of the others. At least one encounter was the result of merging a couple of them together.  Sadly, it's been well over a year so my notes of what I exactly did seem to have been misplaced.  In retrospect, this last 'third' of the module had the least done to it and was the meat of the scenario.

Assault On Blacktooth Ridge is a strong and well defined adventure.  Thankfully, it was also one that can easily be modified to suit the needs of any one gaming group.  After running the Rising Knight, I was able to assess the needs of my group and changed this adventure accordingly.  Due to a lot of scheduling issues, it was more than a year before I finally began the next module in the series, A2: The Slag Heap.  I was able to do A1 in three (or maybe four) sessions -- none which were overly long.  I just finished the Slag Heap a couple of weeks ago and was able to get that done in four sessions as well and we are starting A3 this Friday.