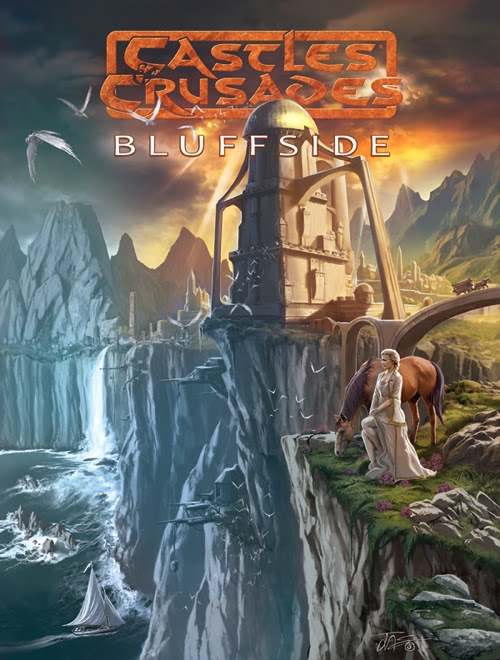 Well, time to kick off another round of Weekend R&R's and hopefully I'll be able to do more than I did in 2013.  When I initially went about doing these in 2012, I tried to do one a week but the number of posts last year were far less than those the year before.  I think I managed to do no more than 16 or 17 of these reviews.  Of course, it isn't for a shortage of material to review or reflect about.  There are a few products I've meant to talk about for quite a while -- some of them related to Castles & Crusades and others which do not.  To kick off 2014, I opted to take a good look at the Bluffside - City on the Edge book put out by Troll Lord Games for their flagship C&C game.

First of all, what is Bluffside?

Bluffside is a sandbox adventure setting which was originally put out in the early days of the d20 era and recently redesigned and expanded for Castles & Crusades.  While those who were aware of the product back in 2001 were quite taken by it, it sadly was just a drop in a very large bucket due to the sheer amount of d20 material being pumped out by a legion of publishers and studios.  The city of Bluffside has a chance to be rediscovered and may now stand out a bit more compared to its previous incarnation.  From the back of the book, Bluffise is described as:


...a Boom Town boasting the most precious metal in the known world -- adamantine.  Perched upon high cliffs overlooking the deep waters of Crater Bay Bluffside's many districts sprawl into the country beyond, climb  the cliffs and ride the waters.  Here is a city forged on power, where corruption mingles with purity and men contend with one the other for gold or glory, for the greater good or the selfish turn.

Granted, this text is evocative as it is poorly written and punctuated.  Fortunately, the text within the book is better edited. 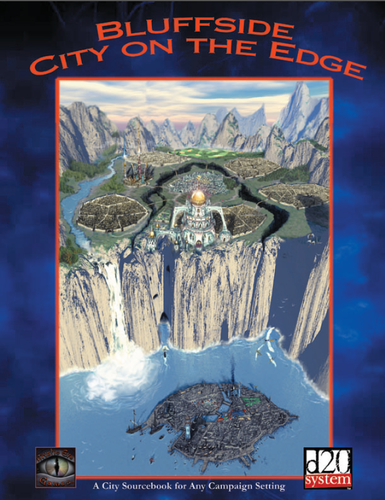 According to the history of the area, Sem La Vah was the center of an event referred to as the Great Sundering which seems to have likely been caused by a meteorite.  There was an ice age, and the city along with the northern continent was lost only to be re-discovered over a thousand years later.  Bluffside was the name given to the community which sprung up amongst and beyond the ruins of the ancient city.  When adamantine was discovered, people flocked to Bluffside and it grew into the city detailed in the book.

The idea of the city if compelling enough and as a sandbox setting, it makes it easy enough to insert into any given campaign world.  Because of the link to a rare and precious metal, it also gives this city a possible purpose for a campaign -- principally a way to introduce and control the flow of a rare material while creating opportunity of adventures, plots, and intrigue to go along with it.

As a resource, the book details over 100 places of interest each with an array of adventure hooks.  This represents about a third of the book's total page count.  You have an additional 30 pages of NPCs detailed that forms the first appendix, more creatures detailed for C&C in the second appendix, and new races, classes, and magic beyond that.  The book has plenty to mine from though a discerning GM or CK may elect to drop certain things.  New classes for instance are always interesting to see and can be fun if there is a purpose and context to them.  However, how the class is constructed is a different issue.  As an example, the experience point progression may be a touch too high for the Blood Guardian though it should be higher than that of a wizard.

It should also be noted that this final version of the book was released just a few months after TLG's "Free City of Eskadia" which I talk about HERE.  This naturally invites some comparison between the two but both are excellent resources.  Each offer similar features but the Bluffside book does have one nagging little issue.  In Chapter 1 (the Introduction), under Maps, the book goes on to describe:

Every district of Bluffside has a section devoted to it, describing that district.  At the beginning of each of these sections is a map of the district, identifying all the POIs in the district, with a key for ease of use.

While it is true that every district has a section devoted to it, there is no map at the beginning of each section.  Furthermore, while there are maps included at the back of the book, the maps themselves are not keyed with the various POIs.  You know there are there by reading the section but not the location within the district.  Most won't really need to know that either and can get by without it but, in all fairness, the Free City of Eskadia has map sections all throughout the book as well as the back and both have the locations inscribed on the maps.  Conveniently, the maps in the book are blown up cross sections and they are very convenient for the reader.  It strikes me as a bit odd that a similar approach wasn't done with this book because it is quite a nice volume.

I confess that I continue to be a bit disappointed at TLG's pricing when it comes to PDFs.  I missed the opportunity to pre-order the book initially though they were asking for $5 to get both the PDF and book.  That pre-order page is STILL up though you won't be able to follow through with an order.  If you want both and are looking for a deal, you are sadly out of luck.  This is not so much an issue if you prefer having just one format and I do recommend the book despite a couple of inconveniences of design.

You can order it off of the TLG site at their online store or, if you would like it in PDF, you can find it HERE on RPGNow (part of the Onebookshelf family) for $19.59.