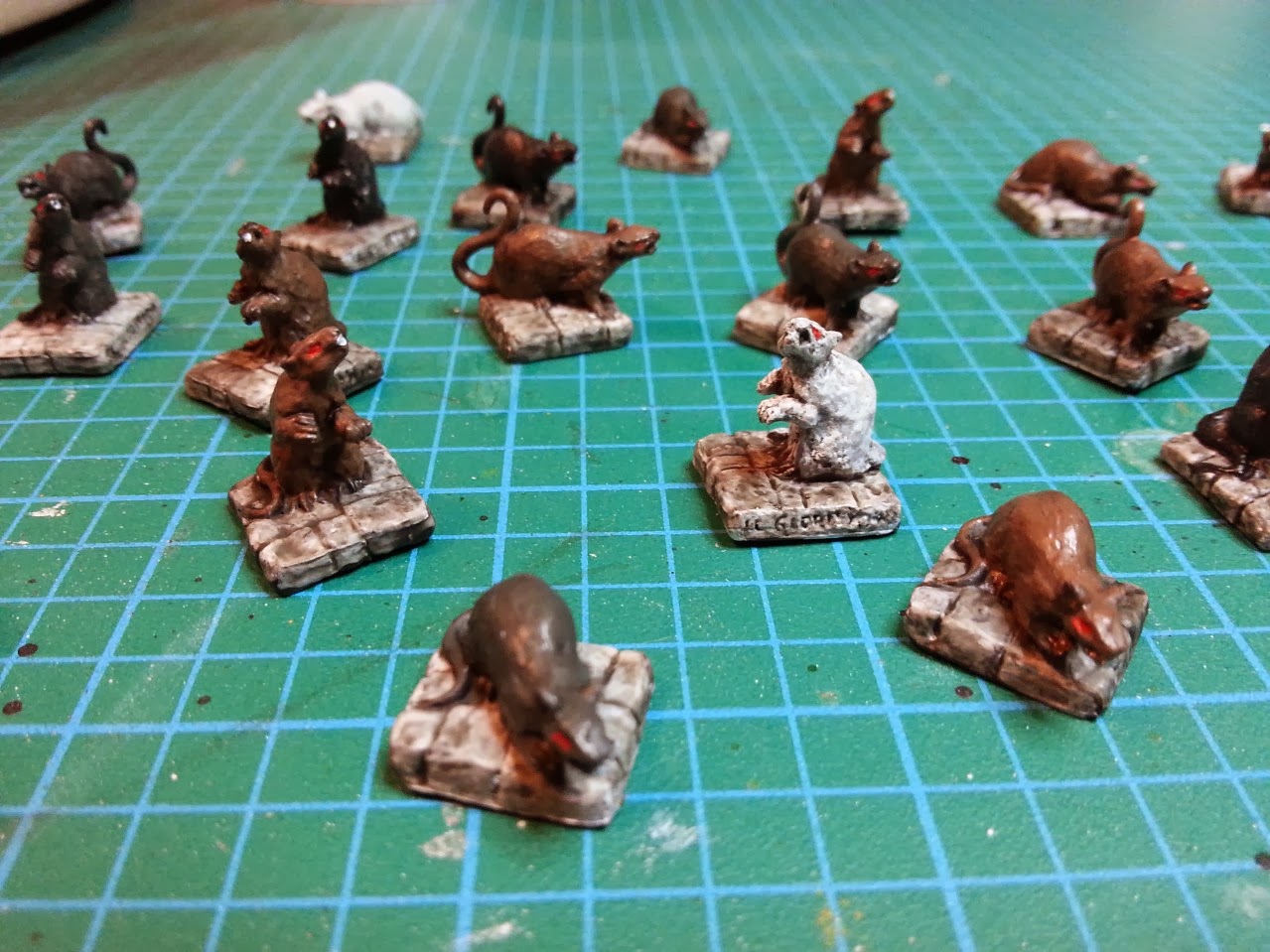 There is nothing 'giant' about these giant rats but, if I was only 25 - 30mm tall, these would be big freakin' rats!  I had a number of them from the first Reaper Bones Kickstarter and I thought it would be nice to do them all and just get them out of the way.  However, I quickly made more work for myself as I realized that I didn't want to do them all the same color.  I fact, I started off by even thinking of doing different color bases and alternate between black and white to give the appears of the classic black and white kitchen floor tile design.

Things changed as I started working on the rats so while it took me longer to do certain things, it was still a quick enough process given I was working with 24 models!

The big thing to change was the bases.  Each rate is on a tile base which is, in reality composed of 'tiles'.  The effect would have look a bit weird so I was already having my doubts as I was working on the rats.  What sealed it is when I worked on the white tiles.  Initially, I painted half the bases white but I applied a dark shade (wash).  The tiles became (predictably) grey but the lines were darkened as intended.  What I was originally going to do was do a drybush of white over the base which would have preserved the lines/cracks in the base but given me the brilliant white tile.  However, the grey looked so good and the best way I could describe it would be a 'dungeon grey' which, needless to say, worked really well.  As for the rats, a total of 4 colors were used: White, Brown, Grey, and Black.

As usual, I predominantly used the Citadel paints from Games Workshop when painting these models unless otherwise specified.  Furthermore, I primed the miniatures using Gesso before applying my base coat.  My initial article on Gesso can be found HERE if you are not accustomed to working with it but would like to know more.

Needless to say these are not meant to be a massive undertaking as far as painting is concerned.  With application of the base coat paint, most of the work is done with the miniature.

All models received a generous coating of 'Nuln Oil' which extended to the coating of the base.

Keeping it simple, only two models received very light Dry Brushing.  I used 'Praxeti White' on the white rats since the shading turned these grey like the tiles.  The white served to bring it back to what it was while leaving some of the shading in the recesses of the fur and model.  I used a bit of 'Mechanicus Standard Grey' on the Black Rats just to give it a hint of highlighting.  Upon reflection, a very dark blue could have worked well instead.

I went back and used a layer of 'Evil Sunz Scarlet' to allow the eyes to stand out a bit more and... there we have it.  Two good sessions to do 24 rats to unless upon unwary adventurers!