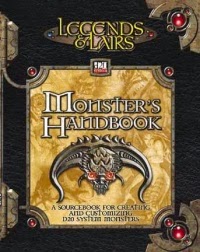 With the Critter Bundle I've put up for sale, I made brief mention of 'The Book of Templates' published by Goodman Games.  While a great resource, it isn't the only d20 book on my gaming shelf that fills this kind of function. In this case, one of my favorites is the 'Monster's Handbook' which is part of the Legends & Lairs series, a d20 book published by Fantasy Flight Games.  This isn't the first time I praise the books from this series and, it's worth mentioning the involvement of Mike Mearls as one of the main writers for many of these books.  For those who don't know, he's tied to the development of D&D Next (aka 5th Edition) set to release later this year.

Now, the Monster's Handbook is a sourcebook for creating and customizing monsters for the d20 system (pretty much D&D 3.x and other derived games).  The book stands out in a few ways though in that it's not just a collection of templates.  The first chapter is about modifying your creatures and, by extension, creating new ones.  Lots of tables dictating costs and how to calculate new challenge ratings as well as providing all manner of guidelines to help you in this process.  The book from Goodman Games does as good a job as this book actually unlike other d20 books that just seem to provide new templates.  The second chapter, which is just four pages, talks about creature tactics and, is concise and to the point giving the reader / user helpful guidance with the creation of the critter.

Of course, the majority of the book are templates and the remaining chapters of the book are each devoted to a category of monsters:
Each chapter is interesting in itself... discussing everything from classes, to skill and feats, to even items, both mundane and magical.  Many of these are new and suited to the subject matter of a given chapter and then specific new templates are provided to use whereby the changes are detailed and, special rules as explained as needed.  Each chapter also provides a ready to use example -- many of which are quite cool.

The biggest disservice of this particular book come down to how Fantasy Flight Games when publishing this material handled certain things.  Most of the books in the series is hardcover have about the same page count... 172 pages plus a couple extra pages for adverts and the OGL.  The Monster's Handbook had an entire chapter not included in the book.  It's listed in the Table of Contents as a Free Download from Fantasy Flight Games.  It is referred to as a 'Bonus Chapter'.  Of course, the book came out in 2002 and this presents a problem if you never grabbed this extra content.  It just isn't anywhere to be found anymore (but I count myself lucky that I have it).

I do enjoy the book and probably one of the biggest draws for this book is concerning the nature of monsters in 3rd Edition.  Don't get me wrong, I have plenty of issues with the system over all but there were some great aspects of the game design that deserves to be highlighted.  One of course is the unified dice mechanic and this is a good thing and I'm happy that other games that are closer to 'old school' in terms of philosophy have adopted it.  Of course, Castles & Crusades comes to mind but there are others.  The other though were how the monsters were done and constructed (for the most part).  With many of the earlier monsters appearing in the core books, there was a strong desire to create a systematic game balance no matter where you looked.  More often than not, they succeeded.  Balance eroded in time as more and more supplements were being pumped out and some of the problems were compounded by a variety of new d20, third-party, publishers trying to make a quick buck as they 'rode the wave of consumer demand'.  A lot of work and detail went in to the Monster Manual and then Monster Manual II as, essentially, the question of creating monsters came down to formulas.  Nothing was ever perfect so not all Feats (for instance) were created equal but the rest of it presented something that resembled more of a 'system' than just, 'going with your gut and instincts' when creating something new.  Of course, trying to use this for C&C or even Swords & Wizardry may ultimately be an exercise in pointlessness, a book like the Monster's Handbook was a valuable aid for those playing d20 material along with the rest of the Legends & Lairs series.

Sadly, any hope of getting a legal PDF of this book seems elusive as most of the series is just no longer available.  It's no longer even recognized on the Fantasy Flight Games website.  Fortunately, there is a second-hand market and this book isn't all that elusive.  Looking at Noble Knight games, you can secure a copy in NM condition for a mere $8.00.  Well worth the price *if* d20 / 3rd Edition still appeals to you for one reason or another.