This edition of the Weekend R&R is a bit early but I hope to do another one before the weekend is through...  Enjoy!


"Sneaky Players make the Troll Lord angry.  Unless thee be a crafty Referee, master not the mysteries contained in 'dis tome.  Turn thy attention elsewhere 'til thee are summoned to the table.  And 'den?  'Den thee follow the Troll Lord's command: Roll 'da dice.  Play Hard." 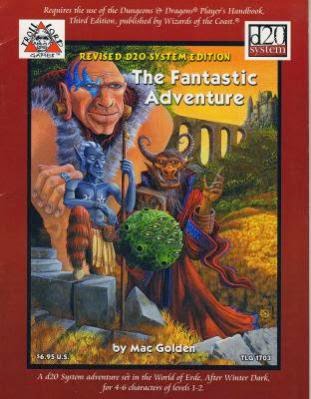 Those were the first words introducing  Mac Golden's "Fantastic Adventure" which was first published in July of 2000.  It was also one of the very first products that Troll Lord Games published and was done right before Wizards of the Coast unleashed its vision of Dungeons & Dragons and the d20 revolution that followed.  More importantly, this module along with a couple other initially published offers a glance at the 'Sword & Sorcery Fantasy Role-Playing Game' which is, arguably some of the roots which became Castles & Crusades.

The adventure module takes a simply concept and offers a twist when the party is confronted with some unlikely allies pursuing common goals.  In essence, 'The Fantastic Adventure' is a very basic scenario which is good for referees and players who are just starting out.  It's a great introduction and, if it weren't for going against a couple of stereotypes when first meeting these non-human and what end up being intelligent, monstrous allies, it could be a module very quickly forgotten or simply ignored by more experienced gamers.  However, there is a bit of charm to the presented scenario.  It is in three basic acts... Act I essentially railroads the players by forcibly compelling the characters to undertake a mission on behalf of the town.  Act II largely deals with the encounter with the other adventuring party.  Act III is where you clear out the abandoned abby in order to complete the quest.  There is very little beyond it but it does make a fun little romp which can easily be completed in a single gaming session.  The adventure contains text for the GM to narrate which is bound to annoy a few people and yet, it also provides an introduction to the setting of Aihrde which is TLG's default setting.  As an introduction to both this type of game and the setting, the Fantastic Adventure does a fair job but, given its simplicity, it is easy to do more with it and the key is how you use the NPCs encountered in Act II and then using them in Act III.

My players will always have fond memories of Octo -- the oddest looking character in the bunch and how he was struck down in combat.  Some of the battles in Act III were ferocious and the Lesser Chimaeras they faced proved brutal.  But the party prevailed and the Fantastic Adventure will always have a special place in my heart as this was the first adventure I ran with my C&C group and my wife.

Of course, I had to convert the material contained in the module for this to happen which brings me back to the 'Swords & Sorcery FRPG'.  The system which really consisted of some 3 or 4 pages of notes detailing very basic stuff was designed to be compatible to other similar FRPGs that came before it.  It was effortless to use with C&C and, the revised d20 version that appeared afterwards is equally easy to use and adapt.

There was never a published version done for C&C though... well, at least not until now.  There were rumors that this was being worked on of course going back several months.  However, it is with the present Castles & Crusades Kickstarter that it is being released in print format for C&C.  This is a freebie for everyone who pledges $99 or more to the campaign.  As an added bonus, it is going to be signed by the author and certain to be collectible.  I have no idea is they intend to put in some of the old S&S notes at the back of the module.  I think it would be awesome if they did.  Regardless, it will be nice to finally see an official C&C version of this fantastic adventure.

If you want to learn more about TLG's current Kickstarter campaign, you can do so HERE.