A Tale of Three Packages

In the past 24 hours, I was delighted to received three packages. Packages usually mean pleasant goodies and sometimes unexpected surprises. The first two packages were from From God Games and Antediluvian Miniatures. Both of those packages were Kickstarter related. The third package was somewhat of a mystery though but I had my suspicions.

Let's start with the one with Frog God Games. When they did the Kickstarter campaign to fund the latest printing of the Swords & Wizardry Complete Rulebook (the third printing), I decided to back it. Initially, I only went in for a PDF copy since I already had a set of the rules and I backed the 2nd printing campaign when it ran a few years back. I just couldn't resist the Erol Otus cover art and, I backed at the higher levels then which got me a bunch of extras like the Tome of Horrors Complete and a copy of Monstrosities. This time around, I was a bit more 'cautious' with my money largely due to increasing shipping costs to Canada and an exchange rate that really hurts my buying anything in USD currency. But, when one of the stretch goals materialized, and the Tome of Adventure Design was going to be reprinted in hardback, I jumped in with both feet and got a physical copy of the new S&W book as well as the ToAD as physical add-on. 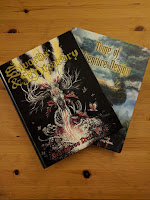 The package got to me earlier this month and the box got banged up. I had concerns and I was right to have them. the corners of the books had pretty much been crushed and smashed. The problem? A very thing wrapped cardboard boxing with a thin sheet of small bubble wrap. The box corner edges were did not close flush with either and each corner was basically only protected by thin bubble wrap and tape to seal everything.

Now, to be fair, the people at Frog God Games did respond quickly and apologized for the inconvenience. They sent out a new set of books to me and this was the package I received yesterday after work. Sadly, they used the same packaging technique albeit the packing was marginally better. The book corners are better than they were on the first pair but not quite as pristine as I would have liked them to be.

Honestly, while I love their products, the packing they do now is so far inferior to the packing used to do, that I may reconsider ordering any physical material from them in the future. Better to get it in retail or order from Noble Knight Games.

The second package was extremely cool and this is the second time I get something from Antediluvian miniatures. This was a Kickstarter they did to bring back a familiar looking bunch if you were a kid in the 80's and ever saw D&D as a cartoon. The miniatures in question is the same party but much older and seasoned. As in, they aren't kids anymore. With that, I got a certain winged foe, a short and balding dungeon master and a few pig faces orcs! How cool is that? 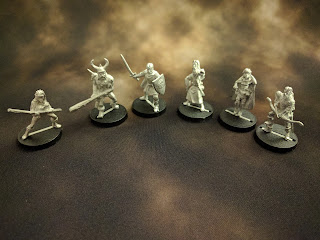 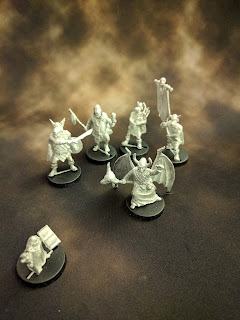 The third and final package caught me by surprise but only because I wasn't expecting this for at least another week. The proofs came in for the first book to be published by Arcana Creations' new imprint. I am EXTREMELY pleased with how the book looks. They are still proofs and there is some tweaking that will be done but I'm not sure if there will be much done beyond tweaks. We have four people who are reading it and providing critical feedback and, once that is in, we will implement whatever that needs to be done and order a final proof before we greenlight the book for sale. On a related note, the Kickstarter is in the process of being designed / constructed but, with a bit of luck, will launch early next week. 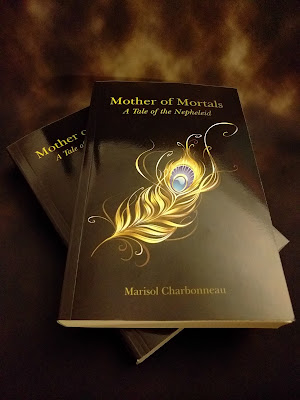