So... what have I been up to this week? This week was technically a vacation. By that I mean, I didn't have to contend with my usual 9-5 day job and I should have been having fun or relaxing. As it turns out, I wasn't really doing any of that but at least it wasn't the typical grind. Most of this week was spent prepping the first novel that Arcana Creations is producing.

At this stage, the completed novel has already been put through editing and layout. Actually layout had to be done twice since I was concerned that the margins I had set was could cause a few issues so I had to go back and re-work it. This more or less describes a lot of the sort of work I had been doing. I do it once and then, for whatever reason, I have to revisit it to correct a problem or oversight. While I've produced adventure modules before, a novel is a different sort of beast. The cover took longer than I wanted but that is mostly due to the fact that I'm using new software to do the work and I am pretty much learning as I go. After this is done, I'll probably go back and watch a bunch of tutorials to learn the program better.

With the production of something that is not gaming related, I decided create an imprint to publish these sort of books and I'm planning to do more down the line. With that in mind, I commissioned a logo which currently needs a last finishing touch before I start using it. I will have it sometime early Friday morning and, once I do, I'll be using it for the novel.

I fully expect that I will be ordering a proof tomorrow.

The next step will be to launch a small Kickstarter. With the project so close to completion, crowdfunding will be a great way to do a 'pre-order' of sorts. Beyond fulfilment, money raised will also help offset the modest costs of the project and help fund a small print run to do a small local book launch.  The campaign, once started, will run for about a month (like most Kickstarter campaigns) with fulfilment happening within a couple months of project end.  I guess that's what happens when you have most of the work done before launching a Kickstarter.

Here is a simple mock-up of the cover of the upcoming novel by Marisol Charbonneau titled 'Mother of Mortals': 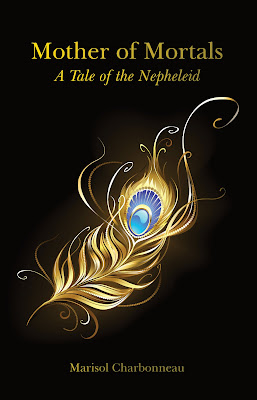 That's all for now!