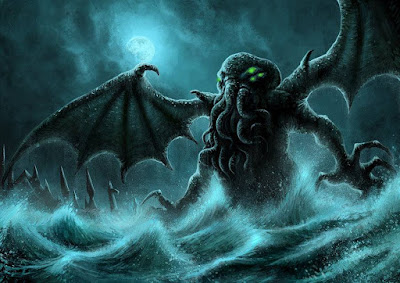 As I have written before, my first foray into the Call of Cthulhu ruleset was quite some time ago. It was over 20 years ago and I had played a bit of the fifth edition of the game. I had made a few characters for the game because bad things happen in this game and they result in one of a couple of things -- insanity or death. Sometime death would follow quickly after the character became insane. It was run regardless and I even had the chance to experience a chunk of the original 'Horror on the Orient Express' campaign. All in all, I didn't play for long and probably not much more than a couple of weeks. Yet the game had made it's mark on me and, after so many years, I returned to the game and began to run it late summer last year. 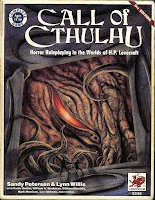 The main difference was that I wasn't running 5th or even 6th edition. Chaosium had finally delivered a 7th edition of the after a complicated and problematic Kickstarter fulfilment. It was born out of a crowdfunding campaign that was launched in May of 2013 and followed less than a year after the new, revised, and expanded Horror on the Orient Express campaign boxed set. Backing the Orient Express campaign was, in part, nostalgia. I had a copy of my 5th Edition rulebook so I figured I was good to go and the kickstarter offered tremendous value and the difference between the Canadian and US dollar was no where near as pronounced as it is now. But, when Chaosium announced the 7th Edition, it was a quick decision for me. It took over a couple of years for the first Kickstarter to materialise and much longer for the rulebooks from the second campaign to show up. A full three years in my case.

It was worth the wait.

The format of this newest edition took a few departures from the version editions of the game. The most significant being the decision to move away from one rulebook to two rulebooks. With 7th Edition, you now have an Investigator Handbook and a Keeper Rulebook. The Investigator Handbook has everything a player needs to create an investigator but, as far as rules are concerned, that's about it. The book is close to 300 pages and does have other things useful for the player and keeper alike. In particular, it has a lot of 'fluff' for playing in the game's default 1920's setting. A whole chapter is dedicated to the roaring 20's and the book also provides the complete text to H.P. Lovecraft's 'Dunwich Horror' and a host of other reference information. The Keeper Rulebook on the other hand is a beast of a book. Coming in to about 450 pages, it has all the rules the Investigator Handbook does not. All, the rules but just an overview of character creation. Notably missing from the Rulebook are the pages of occupations available in the Investigator Handbook. It's a bit of a shame since the books themselves are not inexpensive by any means. They are not overpriced either but gaming books these days are generally pricey to begin with. The lack of this might cause some hoping to save a bit of money just try and get by just buying the Keeper Rulebook but, unless you are are very familiar with the system, it is probably best to make the investment. The Keeper Rulebook also includes many examples to assist someone in running the game while offering a diverse amount of chapters on major different aspects of the game. The great things about these books? They are also in full colour. 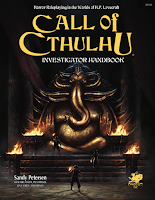 What I like about a game like Call of Cthulhu is the decision to keep things relatively intact as far as the ruleset is concerned every time a new edition is released. Those familiar with past editions won't feel lost looking at this newest version but there have been a few changes and additions. The first thing those coming from previous editions of the game are the games in the numerical values of the stats. Whereas they once would range between 3-18 (a roll of 3d6), they are now converted to percentile scores. This helps streamline things making percentile checks much more universal than before. Related to this and the percentile based stats and skills are how checks are now conducted. Before, it was a static result but now, there are levels of difficulty (degrees of success) that also play factor. Aside determining success or failure when measured against the value of a particular skill, half that value is require for a Hard success and a fifth is required for an Extreme success. This system allows for a interesting way to do opposed rolls where the higher degree of success wins the challenge. That is how combat is generally handled.

Of course, Call of Cthulhu has gotten a reputation over the years of being a bit merciless towards player characters. Anyone who has read Lovecraft will appreciate the bitter end to many a character that appeared in his stories. The role of the investigator in this game is fraught with many perils. Fortunately, a couple of things have been added to the arsenal of the player to, perhaps, give a bit of a needed edge. Luck can be used a pool and spent to improve a player's roll and it is now possible to 'push' a check.  To push the check, the player gets to re-roll a failure with the understanding that another failure will bring with in consequences beyond simply failing the roll. Finally, there is also a bonus/penalty dice mechanic that is introduced which can improve the odds (or worsen them) as the situation demands. That sort of thing has recently been made popular with the Advantage mechanic in the newest edition of D&D.

Beyond these mechanics there are naturally other changes and additions but none of which are as important as the mechanics. There are new things like Chase Rules and an entire chapter is devoted to it and there is a section to roll up background info for your character. And so much additional background material but many will enjoy this sort of fluff.

Otherwise, Call of Cthulhu is a skill based RPG -- not a class/level based on. A character won't advance in 'level' upon attaining a certain requisite experience points. But they could advance in the skill they actually and successfully put to use in the course of a scenario. The isn't a boat load of health and it is entirely conceivable that a character will die easily if they go out of their way to get into a fight. Ultimately, it is a game of investigation and exploration with the purpose to piece together a story. Pacing and atmosphere will likely be very different from other games. It is also a very easy game to pick up and play and, this edition and these books are a great way to get into the game.

The books are readily available and the PDF version can be found HERE for $22.95 for the Investigators Handbook or HERE for $27.95 for the Keeper's Rulebook. Physical copies can also be ordered straight from Chaosium themselves for $44.95 and $54.95 respectively and they include PDF copies as well.