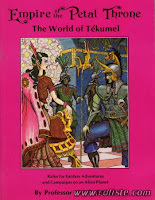 With the passing of Professor MAR Barker, about a few weeks ago (March 16 to be exact), I decided to correct a serious omission in my gaming collection. I decided to track down and order a copy of "Empire of the Petal Throne".  Unlike the Wilderlands created by the Judges Guild, the writings of Barker and his world of Tekumel was something I was aware of for many years.  EPT was something I knew about and, admittedly knew very little about all at once.  I knew about aspects of the rich history and culture and the language he created for his world but, for whatever reason, I tended to forget about the fact that it takes place thousands of years in our future on a different planet.  In the end, I hadn't made acquiring it much of a priority because of relative scarcity of the material and because it seemed a bit too exotic based on my limited exposure to it.  It wasn't something I could readily find at my local hobby shop and, unless I wanted to try and track down a used copy online, it probably wasn't going to happen.  Interestingly enough, it wasn't till about 5 years ago when I started to actively search out older, OOP gaming books online to pick up things I hadn't gotten when I had the chance years prior.

But that was then and this is now.  Around 5 years ago, not only did I occasionally utilize eBay to pick up a few things, but I often came into contact with other gaming enthusiasts and found Noble Knight Games.  A couple weeks ago, it just so happened that I had a $20 gift certificate for NKG and I decided to put it to good use.  Of course, I had to do a bit more research on the subject.  I did know someone who had some EPT material which is where I got my first taste years ago but I didn't know what was what and, the simple fact is that there were many different EPT printings and offerings since TSR published the initial print run in 1975.  I was also not sure which version I had even seen all those years ago but I knew I wanted something 'like it'.  Thankfully, I had the internet to help.  In particular, I found the Tekumel site to be invaluable to narrow down what I wanted.  You can check this little resource out HERE.

After checking out the differences and doing other internet searches, I was able to determine that the version I wanted really would love to own was the original TSR box set.  The cover / box art alone is just beautiful.  Reality of course meant different options.  This was *not* the version I had seen and reality of tracking down one of these sets without costing me a fortune made it clear that I needed to keep looking.  I did quickly find out what version I believe I had looked through all those years ago and I believe it was the Gamescience reprints.  I guess that's the thing though, I picked up the Different Worlds reprint of EPT since it was not too expensive and the texts were essentially all reprints of the same ruleset.  After the Different Worlds printing, there was also the Tita's House of Games reprint and my understanding is there are little to no differences with all these different versions.  Now I should point out that the Tita's House of Games material was cheaper *but* having never dealt with them directly nor seeing any updates beyond 2009, I was a bit concerned.  Plus, having shopped at NKG many times before and having a gift certificate, I had enough motivation to not be bothered much by the higher price for the older printing.

What I really like about EPT, flipping through it now as I did years ago, was the D&D angle.  While EPT was billed as it's own game, it is so close to the original D&D pedigree that using it for what I currently play (C&C) would be a synch.  The beauty of EPT is, of course, the setting -- the mechanics are secondary and, being that I am so familiar with D&D type mechanics, it becomes second nature to pick up and use.  Now, while I said 'D&D type', that doesn't mean it's D&D.  If it was D&D, it could have potentially because one of the D&D sourcebooks alongside Greyhawk and Blackmoor.  Instead, it is a system which is clearly derived from D&D -- 6 attributes (Strength, Intelligence, Constitution, Psychic, Dexterity, and Comeliness) using a percentile system.  What's interesting is the skill system that the game also has in place.  Other aspects of the game such as hitdice and armor class are there as well making the game really familiar to D&D veterans.  This is the EPT I wanted and thankfully, if you find it (regardless of the printing) this is what you will get.

Now a few weeks ago, I mentioned Space 1889 and the impact that John Carter has had as far as inspiration is concerned.  Empire of the Petal Throne just continues to fuel it.  Now that I take the time to read the book, I really think I need to get some more and have some fun exploring this exotic setting!

While a used copy might be pricier than one would like, the Tita's House of Games seems to retail around $25.00 if you can find it, or order it from the source, or just wait for Noble Knight Games to carry it once more.  The better bet in my mind is to get the PDF version at $11.00 off of RPG Now! (Drivethru) and print and bind it yourself if need be.