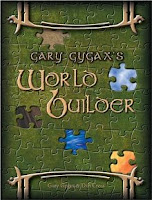 With last weekend reminding me of some of the work Gary Gygax had undertaken in his post-TSR days, I started revisiting some of the other books he wrote and put together.  Gygax signed early on to do material with Troll Lord Games and together, they sought to accomplish a variety of goals up to his death in 2008.  These included:

1) Continuing to publish material for Lejendary Adventures.
2) Realize the publication of the infamous Castle
3) Put out a series of books and aides for the development of a 'Gygaxian Style' fantsay campaign.

While they weren't completely successful with all these goals with Gary's passing and subsequent loss of license to produce and sell TriGee licensed material, TLG did end up publishing 7 books in the 'Gygaxian Fantasy Worlds' series.

Gary Gygax's World Builder is actually the second volume in this this series -- the first was "The Canting Crew" which was generally well received.  World Builder on the other hand was a much maligned book but personally, I love it.  It's greatest weakness is that it has difficulty in standing on it's own.  At best, it serves to complement other gaming accessories and supplements with the goal to enrich one's campaign.  You see, ultimately the book is a book of lists and most won't find these at all interesting without some better context.  In fact, the book is perfectly suited for a system that might be 'light' as far as details are concerned.  Nowadays, big production RPGs will have standard list of items, weapons, and armor but won't necessarily go into the sort of details that some gamers will come across simply because they aren't necessarily as well read as others when it comes to something like, medieval warfare is concerned.  Do you know what aketon is or what a burgonet is?  Some people do but most people don't -- World Builder will tell you and even include an illustration!

This book has a section on equipment of all sorts... everything to arm your characters to items you can find at everything from a general store to a tavern or inn and tailor shop.  It has lists of names of currency to foodstuffs to drink.  Transportation is covered as well.  But how do you go about presenting all this stuff in a book?  Well, lists of course.  Detailed lists.  A couple of tables as well to roll up some stuff.

After the section on equipment, there's one dealing with the natural environment... nature and all of that stuff.  More lists and more tables.  Trees, herbs, metals, stones, and fauna.  Weather effects are also covered but the herbs, stones, and metals get very special treatment in this section and an enterprising GM can use this to 'spice up' and add a lot of flavor to the magic they use in their games -- something I've brought up in the past.  This section ends up providing properties and virtues for a variety of things which may remind one of the sorts of things you'll find in "Culpeper's Herbal" or an old Farmer's Almanac or even Agrippa's "Three Books of Occult Philosophy".

The last section of the book gives focus to the sorts of 'acoutrement' you'll have for housing and buildings of all sorts as well as the materials and types of constructions.  There are tables to help you furnish the various types of buildings and dwellings.  Then there are more tables dealing with different aspects of the populace.

The book finishes off with some useful appendices which happen to be collections of lists and tables.  All of the book is kind of nifty in this respect and quite good.  Unfortunately, unless the person using the book as a clear and concise idea of what they are doing, more might be needed to help them 'build' and provide guidelines to help them do what they want to do.  In the end, the greatest thing about the book is also the greatest flaw.  Combine this book with other books from the 'Gygaxian Fantasy Worlds' series and you've really have something wonderful as the other books help fill the gaps some may find missing from this singular volume.  Of course, one of the best things about the series is how it is almost completely stat-less.

World Builder is also one of the last books Gygax wrote (in this case, co-wrote with Dan Cross) though 'compiled' might be a better word.  The best book in the series IMO is actually volume 3 entitled 'Living Fantasy' but I really feel that both 'World Builder' and 'Living Fantasy' complement each other far better than as separate entities.  Living Fantasy was the last gaming supplement he actively wrote before he suffered his stroke in 2004.  After the stroke, he took on more of an executive role in overseeing the projects he was involved in.  He didn't actively write the way he did prior to 2004 but guided other writers who worked under him on the various projects he was doing.

Sadly, all of his material is no longer available.  Period.  If interested in any of these works, you'll have to try your luck in the second hand market.  Ebay may be your best bet though Noble Knight Games has a couple of used copies of 'World Builder'.  Despite my love for the book, I cannot recommend NKG in this instance since they want $60-65 for the book.  That said, I did notice that "Living Fantasy" was available there as well and they even have a new copy and it's on sale.  If you don't have *that* book, do yourself a favor and pick it up.  The new price is $17.95 and the NM used price is $15 right now and that's a GREAT buy for a solid book.