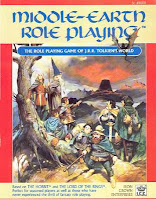 One of the first RPGs that I was exposed to after my introduction to AD&D was Middle Earth Role Playing. I was reminded of it a few days ago given the games connection to Role Master and the multitude of tables the game supplied -- notably the critical hits and fumbles. It was the subject of the DCC RPG and its own many and various tables which drew comparison to Role Master while chatting with a few fellow gamers the other night. I confess that I never got into Role Master proper but I did get the Role Master Express book when it was released a couple of years back due to the many comparisons some fans made between MERP and this streamlined version.

However, many years ago, someone I had just met made offer to run a campaign with MERP which I agreed to play in. It was just so different compared to the only other RPG I had played and, to top it all, I had yet to read any of the books. My only exposure to the Lord of the Rings was the animated cartoons I had seen as a child. My first character I created for the game was a hobbit and vaguely remembered playing him as I would a thief. I also remembering not being too cautious when playing the character. In fact I decided to go sliding down a shaft but the character stopped a bit too abruptly -- the character ended up with a broken arm. The thing I remember fondly about that? My character ended up with a freakin' broken arm!! That stuff didn't happen in D&D... I mean, the MERP rulebook had rules and tables for that and everything! Not a big deal now by any means but back then, the fact that it was so different to what I got used to was what was so exciting about.

As a system though, having never tried to run any MERP or RM, I did enjoy playing it. It don't remember it being overly complicated but it did necessitate much consultation. Of course, a good set of handouts or GM screen could easily cut down on the problems of running such a game by constantly referring to the book. In that regard, MERP and RMX have fewer tables I believe making it less of a problem to play. I genuinely liked it though but having read through the books a couple of years after I played certainly put the game in a slightly different perspective. It certainly didn't make me appreciate the game any less though. For those curious, the game runs on percentile system and may remind some of the older Runequest material.

Now, I know it isn't everyone's cup of tea -- I've heard alternate names calling the game 'Chart Master' instead of Role Master and for good reason but that won't necessarily make such a game unplayable much like the new DCC RPG will certainly be played despite having a few extra tables. In the end, it's about rolling dice and having some fun. :)

At this point though, Iron Crown Enterprises who is responsible for putting out the Role Master material is still undergoing a period of chaos. Naturally, it lost the Tolkien license years ago so trying to acquire MERP is practically impossible save for used sources. The good news is that it's not too expensive. A first edition rulebook for MERP will run around $15 and up though it is the second printing which seems to be the one sought after coming closer to the $20 - $25 range if you look at Noble Knight Games. The Second Edition of the rulebook is about the same. Sadly, trying to acquire Role Master Express is near impossible unless you are willing to pay the price. What was once something between $5 and $10 (new) about 3 years ago seems to go for around $30 for a used copy. Due to some legal difficulties regarding IP, Role Master Express is no longer available. The only option remaining would be to opt for what is termed Role Master Classic which Role Master Express was to serve as an introduction for anyway. At the moment, the only material readily available (aside from the second hand market) is via PDF though the regular channels (RPGNow) though POD is supposed to be coming soon.

There is a nice legacy to the system but I don't think it will ever be what it once was and used copies are just not getting any cheaper. Hopefully, it will get turned around somewhat so that people can take a look at the system once again and judge it on its own merits.