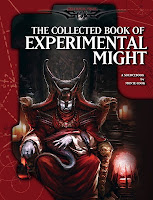 With the announcement earlier this week that Monte Cook to leave the 'D&D Next' project which caused much on forums and blogs alike, I decided to look back at some of Monte's material.

I have a few of his books and not just ones he specifically worked on for WOTC.  Monte Cook had a profound influence on Third Edition, went on to form Malhavok Press where he might be best known for his Arcana Unearthed (Arcana Evolved) material and his Ptolus setting.  As co-designer of Third Edition, he was naturally well invested into the system.  He played it, he wrote for it, and he had his own house rules.  From this and the interest generated on his own blog when he talked about it, he penned the first 'Book of Experimental Might'.  With the success of the first volume, he penned a second companion volume.  They were initially released in PDF format (and had a softcover print run) but it was subsequently published by Paizo as the 'Collected Book of Experimental Might' in hardback.

Personally, I love books like this.  When I was involved with Third Edition, I didn't care much for the variety of splat books (in hardcover no less!) which rapidly grew with the release of 3.5.  On the other hand, I loved the Unearthed Arcana.  For that matter, I also liked the original Unearthed Arcana despite it's flaws when it was released back in the mid-80's (but we'll leave that for another day).  My love for these sorts of books is why I was immediately attracted to Joseph Bloch's 'A Curious Volume of Forgotten Lore' which is coming out later this year.  The list goes on, whether it is old or new, and is also a motivation for my own project, 'The Ballista Rules Companion'.

Cook's 'Collected Book of Experimental Might' is a significant book in the sense that it tries to improve and correct certain aspects of the D&D game. The goal of course was greater playability.  Does he actually succeed?  Well, from my perspective given my gaming preferences (as well as those of some of my other readers), probably not.  But it was a good effort and better than diving towards a 4th Edition!  I'm also certain that the 3rd Edition 'power gamer' would have liked certain aspects of the book (not that I'm encouraging this either).  Looking through the book can give possible insights where some aspects of subsequent games editions were going.

The Bad ... Feats, feats, and more feats.  Different types of feats...  Uberfeats.  Even the name 'uberfeat' may send some power gamers into a frenzy.  The 3rd Edition concept behind feats was not a bad idea and there were certain things about it that were elegant as far as a system was concerned.  The problem is that the list just grew and grew and grew with the publication of new books and somewhere along the way, the concept of balance got tossed out the window.  Even the 'core' Feats in the PHB didn't stack up well against once another.  As an additional, possible flaw with 3rd Edition, many of these were also miniature dependent in terms of combat.


The Good ... Domains and Disciplines.  These are kind of like class abilities.  A cleric as we typically recognize them has an ability to Turn Undead and a Paladin will have Lay on Hands for instance.  In this instance, the characters select a discipline which can become more powerful as the character increases in levels with other associated effects or a new discipline can be learned by sacrificing a Feat slot.  What's great about this is it gives a chance for more differentiation between characters of the same class.

There is also some nifty rules concerning hitpoints and healing... with rules which may remind some of what 4th Edition introduced though not quite the same either.  It also introduces up to 20th level spells -- meaning a 5th level wizard can cast up to 5th level spells as opposed to only 3rd level ones.  Fireball becomes a 6th level spell while Lighning Bolt is 5th level but a spell like Wish is a 20th level one.  Of course, using a vancian system of magic, the number of spells per level is also spread out.  The most 1st level spells you'll gain according to the chart is 3 -- even at 20th level.  Oh... no 0 level spells either though cantips are now part of a Discipline.


Aside from that, there are a few little things like Skills and Feat clarifications as well as a couple of classes but that's about it.  It's not a big book but part of that is the paper stock used I think, it clocks in at just over 140 glossy pages.  Art is nice but nothing stood out for me but the presentation is sharp enough.  But is it worth the price for what you can get out of it?

For the most part, it might not be too difficult to try and shoehorn some of this material for a pre-3rd Edition game though you would need to look out for any power creep from such a modification.  There are some great ideas but ultimately, for most it's probably more trouble than it's worth.  The MSRP of the hardback is $29.99 though you may get it for less (new) if you shop around.  Noble Knight Games has a new copy for $24.95 and a NM copy for a couple bucks less.  In PDF (on RPG Now!), volumes 1 and 2 are $9.00 each but at $18 for the two, you may as well get the bundle which also has an adventure thrown in for the same price.  Given the content, I would be hesitant to recommend the book to any gamer who doesn't play 3rd Edition or a game derived from it such as Pathfinder.  On the other hand, if you like tweaking and exploring different options and don't mind a bit of work, it's decent enough if you can find it for a good price.