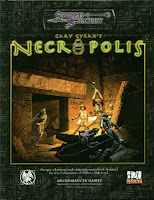 I own many adventure modules scattered on more shelves than I sometimes would like to admit.  I do love a good scenario whether they be good or small.  In the past couple of years, these have also decreased dramatically.  Stuff still comes in but I am a lot more discerning with my choices.  At one point, if it was a DCC (Dungeon Crawl Classics) module, I just had to get it and this went on until the release of Castle Whiterock (DCC 51) which was my last DCC purchase.  I have no idea if I will resume buying the line given that I've pre-ordered the DCC Role-Playing Game and, if I do, if I will even bother getting the 4th Edition line of them.  I mention this since I almost decided to write about Castle Whiterock tonight in recognition of a different mega dungeon / campaign which is now over and successfully funded -- that being the Dwimmermount campaign.  When I was going to dig it out of the closet (where I store a couple of bookshelves due to space limitations) I spied a handful of books I hadn't looked through in a while and chose one of these instead.

'Necropolis' is an adventure which could easily serve as a continued setting and will remind you of the sorts of adventures published in the early days of TSR.  In some ways, it reminded me of the 'The Village of Hommlet' and the rest of the material which form the 'Temple of Elemental Evil'.  Fortunately, there just happens to be a village that the players can use as a base of operations to embark from and come back to during the course of the adventures and campaign.  It's a great place for the player characters to meet and interact with a variety of NPCs and may stumble upon the agendas of others.

Unlike the 'The Village of Hommlet' however, 'Gary Gygax's Necropolis' adventure is not for beginning characters.  It's clearly meant for seasoned adventurers and high level play. For this reason, the book seems to mock me at times.  It's just awesome and deadly and begging to be played!  Every time I look at it reminds me how much I want to run it.  Unfortunately, I don't have any active campaigns with characters of sufficient experience to 'put them through the ringer' so to speak.  I have considered taking the material and scaling it down for lower level play but I'm not sure how well that would work out.  That said, I refuse to just allow for characters created at 10+ level to play this campaign.  I much prefer the idea of allowing characters to advance to sufficient level.  Player's become much more invested in their characters and the game as a result.

So... like the various tombs the land of Khemit, it lies it wait until it is opened with purpose! 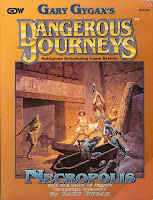 Having never run the adventure, I have read through it on a few occasions simply because of the man that wrote it.  Throughout the work, you have advice and suggestions as well detailed information allowing the DM to run the game smoothly and the entire work serves as a great reminder of what a good and solid 'old school' adventure scenario should be like.  The version I have is the much more accessible d20 version published by Necromancer Games (publisher of the 'Cites of Brass' box set I wrote about in the past) but the first incarnation of the adventure was for the 'Dangerous Journeys RPG'.  While I'm sure that most of my regular readers are aware of what Dangerous Journeys was, for those that don't, suffice to say that GDW was one of the companies hit hard with litigation of the years by TSR due to infringements.  The case was settled out of court and production ceased with TSR acquired all rights to the game.  Unfortunately, I have really no solid knowledge of it and the only version I have laid my eyes on is the Necromancer Games edition.  I am quite pleased with the book... a nice 285 page hardback which is elegantly presented much like the rest of their line of products.  Being d20 and designed with 3rd Edition in mind, the bulk of the stats are at the back in a couple of appendixes and they take up about 60 pages alone.  Add a bunch of spells and items and other various charts and you've got 100 pages of 'support' material to the adventure. There is quite a bit of crunch in this section of the book and given the complete text, as a whole, I do wonder how much smaller it would be if it was made for Labyrinth Lord or Castles & Crusades instead.

The good news though is that it is relatively accessible if you still wanted to get it.  The Necromancer Games version was published a decade ago and you get track one of those though a used (NM-) copy at Noble Knight Games will run you $55 but they've got new ones for $60.  A Dangerous Journeys edition will cost you half that though it will be softcover.  However, of better interest is the $12 PDF at Drivethru RPG if PDFs are your thing.

I still don't know when I will run it but, given that I've got that Dwimmermount hardback shipping my way in a few months, maybe I need to figure out a better way to scale it for a slightly lower party.  Odds are, the adventure will claim the lives of a few characters anyway.  ;)