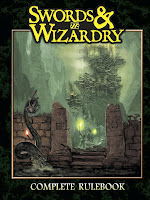 A day ago, Frog God Games started up a new Kickstarter to print up the Swords & Wizardry Complete in a signature-stitched hardback.  The goal was for $10,000 and four bonus stretch goals up to $20,000 were provided.  Within a 24 hour period, the project was funded and all four bonus goals were met.  This is fantastic news, right?  This means there is an overwhelming support for S&W, right?

No... not exactly.  I would say it's great support to a well executed Kickstarter following on the heels of Frog God Games' last great Kickstarter.  As I write this post, they've just past $24,000 but that represents just over 150 backers.  That averages about $160 per person.  People who want some higher tier exclusives and swag have done a great job at inflating the amounts collected.  Now, there's certainly some great stuff to be had, and, if it plays out like their last Kickstarter, there is more to come -- especially since there is more than a month left!

Note: These numbers were in the morning of August 2nd (EST)

So far, the goals achieved granted us the following: A Swords & Wizardry patch, new covers by Erol Otus, added material to the Monster book in the form of lairs and encounters, and finally, a coloring book!  The last item may sound a bit weird and really quirky but if TSR can put out a D&D based coloring book, then why the hell not?

With the original goals bust in the first 24 hours... what next?

Of course, they've opened up the option for people to add a copy of Rappan Athuk for S&W if they add another $100 to their pledge so that should at least help raise the total pledged a bit.


In the end, I'm sure this particular Kickstarter will do well.  Actually, it has ALREADY done well and it will just continue to do better.  With the extra quality being added to the production of these books which will greatly enhance their durability, some of these books could become as worn and well-loved as some of the classic TSR hardbacks.  In effect, S&W is positioning itself to become a solid reference manual for the OSR.  Admittedly, I have not laid my eyes on most of the other versions of S&W -- the only version of it I own is the wonderful 'White Box' which BHP put out a couple of years ago but it's clear that some people love it in its various incarnations.

For these reasons, the success of the Kickstarter can't be measured in dollar amounts at this point but rather the number of backers.  If this fails to yield more than 1000 backers, we all need to ask ourselves why.  However, if we reach many MANY backers, even if pledging at the lowest levels, that too says something and will help send a clear message of what we are saying as a gaming community.  We want to back more of the OSR and the products we love and play!

In the meantime, I hope that Delving Deeper gets a bit of love when it finally comes out because it seems likely that this new version of S&W will eclipse DD if kept under wraps for much longer.  As people who have pre-ordered and / or have been following this know, it is long overdue. The project is in the hands of Immersive Ink, an affiliate of Brave Halfling Publishing (much like Arcana Creations is partnered with BHP).  I've seen proofs for it (a month ago) and it's wonderful and it needs to be released.  Good things come to those who wait though and there is plenty of great gaming on the horizen!

In the meantime, if you want to check out the S&W Kickstarter, please click the link HERE.