A Treasure Trove of Gaming Goodness! 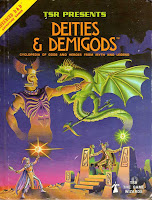 Wow.  Sometimes I have say I get completely floored by some of the friends I have -- friends I've known for years as well as newer friends who really dig my passion for the games I play and the material I try and produce for them.

Someone I know retrieved boxes worth of gaming material from his parents place and offered most of it to me.  That in itself may raise a few eyebrows but the surprise that was in store for me was greater than I initially expected.  I did not know exactly how much material we were talking about, nor did I really know the condition of the stuff.  However, he graciously invited me over to loot the stuff.  I should be clear here -- he was giving this stuff to me.  I did know that some of the material was 1st Edition stuff as this is what he primarily played before he moved on to other games.  That night I found out he moved on from D&D around 1989 ... the dawn of the 2nd Edition era.  I also knew he had a first printing of the Deities & Demigods book and, he wasn't an idiot -- he new he could get some money for it and I gave him a fair rundown of its worth.

What was in the box?  We'll let's just say that I have quite a number of blog posts that this stuff will inspire me to write in the future but aside from 'well-loved' copies PHB and DMG (original covers) there was a host of other 1st ed books ... Manual of the Planes, Wilderness Survival Guide, the UA,and the MM2.  There were also a fair number of classic modules.  A lot of these I did already own but I have to say that the condition of some of these modules were beautiful... near mint copies of S1 to S4, the A series, a near mint copy of T1, D1 to D3 (D3 being monochrome), a handful of the I series modules as well as a couple of the UK modules.  He even had a copy of B3 still in shrink (which he kept for sentimental reasons).  There was also the Greyhawk box set and Greyhawk Folio (in a much MUCH better shape than my own copy) as well as the original grey Forgotten Realms box set and the box itself for this is like new.

He also had a bunch of other stuff he kept.  He was a big Star Frontiers fan and had a lot of this stuff as well as other things such as a run of the old FASA Dr Who game (box set and various modules).  He had (pretty much) the entire run of the Dragonlance DL module series (save one which I will help him track down).  There were a few other odds & ends which will either be kept or found other homes.

I was really taken aback though.  The way he put it is that, he would rather see it go to someone who would appreciate it, use it, and draw inspiration from it than just getting a few bucks on ebay and other avenues of sale which, frankly is a bit of a pain.  I tend to agree with him.

As for the Deities & Demigods, after seeing it, I paid him nicely for it and gave him a few extra dollars for a couple of the interesting items (like the monochrome module).  He had a good chuckle when I offered money for the book but referred it to the 'Cthulhu Book' instead of the actual title.  It's been QUITE sometime I've seen one in as nice a condition as this one was in though.  It's nearly perfect save for a bit of staining on a couple of pages.

In any event, I've been a bit fortunate of late -- first the Greyhawk novels and the Adventure books, and now this sizeable lot of gaming goodness.  Now if I'm really lucky, some of the stuff I have on the way (and is overdue) will finally show up as well.  Got some stuff coming in from BHP which is getting to the point of being really overdue as well as some other Kickstarter related swag which is about to start rolling in.

I guess I've ultimately failed in my quest to minimize my gaming collection.  All that's happened is other different stuff is taking the place of anything that has left.  ;)