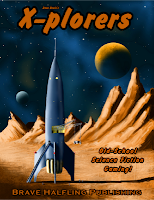 Given that I've just received my copy of the X-Plorers RPG book and just loving so many little things about it, I decided to talk about it a bit more and give my overall impressions about this, and the genre for RPGs in general.  I've always loved Sci-Fi and, while many people will discuss the points that might make good sci-fi reading versus bad ones, the science fiction genre is one that many have brought to the gaming table in various forms.  I've picked up and played a few in my times and, often end up disappointed for one reason or another. Maybe this is another reason in a long list of why I tend to favor fantasy over science fiction in both books and RPGs.  Actually one could also question why I don't explore more 'Science-Fantasy' as a genre but that's best left for another time.

When I first got my PDF copy of the X-Plorers game some months ago, I admittedly didn't get much of a chance to look at it.  It's one thing to get a PDF because you're eager to go through it or simply use it in order to spare the use of a physical copy, but it's another to get it as a partner to the company who's releasing it.  At the time, I know I had other things to worry about and, while I liked the premise of the product, I had been let down before.  The idea behind this game was a 'what if' the game we come to know as D&D was not in fact a Fantasy based game but rather a Science-Fiction themed one?  In other words, imagine OD&D as a Sci-Fi game.

Ok... that *is* pretty cool but, well before I looked at it, I found out a couple of tidbits that didn't interest me much.  For example: Just 4 character attributes.  The notion that a character can be largely distilled to 6 stats seems ridiculous for some but to drop it down to 4 somehow felt like the game was perhaps oversimplified.  While you're at it, why stop at 4?  I also found out that there is just one Save as opposed to different categories signifying a trend towards simplification.  I like a rules-light game but I don't feel that a game should be simplified to the point that it becomes less interesting to play more than a one-shot.

I promised myself I'd take a better look at some point but largely forgot about it.  I suppose I allowed myself to fall into a trap of assumptions.  It was the same sort of assumptions that led some people to effectively 'snub' Basic D&D in favor of Advanced D&D when they were initially introduced to the hobby and not knowing any better.  I suppose the Holmes D&D set didn't help much either with how it essentially guided people towards AD&D once they got a feel for the game.  I couldn't really have been more wrong when it came to X-Plorers though.

In the years before I finally got a chance to examine X-Plorer's, there have been other games.  Some still are favorites for one reason or another like the Star Wars d6 system.  The d6 system is a great system even if it isn't perfect and the main complaint levied towards the system is the buckets of d6 you may end up needing to play the game.  I like the system since it allows for a fast and fun game and being rules light, it encourages the story telling and role playing aspects quite nicely.  Usually rules lights systems will be good for that.  I have used d6 to play other settings and even other genres and the OGL for d6 which is now available has really helped to keep the game alive.  Of course, AD&D was my 'first love' so my immediate preference would have been an AD&D in Space and I'm *not* talking about SpellJammer (I did love it though).  Now I was never fortunate enough to get involved in Traveller so, we'll forget about that but I did play some Sci-Fi using Palladium (Rifts) based games though, as anyone who has encountered or played any of those game will know what I mean when I say that this is the exact opposite of 'Rules Light' (especially if you consider the character creation phase).  So yeah, Sci-Fi gaming has been a bit limited for me.  I was really excited when I first heard about StarSiege and wound up doing some playtesting for it.

I thought that StarSiege would be the closest thing to what I was looking for but simply put, I was wrong.  The rules are well thought but there were aspects of the rules which didn't do it for me.  I do believe that those issues could have been retooled but the problems didn't really detract from the game.  The presentation on the other hand did and not in a good way.  I didn't mind at first but, as time went on, I quickly began hating the setup of the boxset.  I found the text didn't always make certain things clear upon first examination and, while still retaining a measure of compatibility, it largely went in different directions for others.  If one was looking to play a sci-fi game where you rolled your stats, chose a race and class, and started playing, this wasn't the game to do it with.  In my original review of it (from quite some time ago), I described it as more of a 'toolbox'.  Really, you need to have a good handle of what you want to do, and create a bunch of stuff you will need for yourself and the players before you could comfortably begin the campaign since resources are very scarce beyond a handful of examples provided. The box set was interesting since it was intended for a group: There were several Players Guides, a single GM Guide, and a small Setting Book as well as some dice and reference cards.  However, given that there is some duplication happening in the GM and Player Guides, the best and less expensive option would have been just to release it as a single book and expand on the setting or at least provide a comprehensive list of vehicles, ships, and equipment -- something that the original box set is short on.

With a physical copy of the X-Plorers book now in hand, I've actually had the chance to look at it closely.  My initial thoughts wee incorrect and, while the game is simple in its own right, it isn't inferior.  One of the nicer selling points of the game is the price to put it simply.  At a MSRP of $12.95 this beautifully illustrated (B/W art) with very durable and glossy color covers is certain to raise an eyebrow or two.  It's only 40 pages (we're talking regular sized publication and not digest) and the art just screams early science-fiction.  Frankly there's a great 50's Sci-Fi vibe throughout the book which alone will conjure up inspiration.  Characters have 4 attributes (Agility, Intelligence, Physique, Presence) and may be of one of 4 classes outlined (Scientist, Soldier, Technician, Scout) unless the opt to Multiclass.  Each class has a certain set of abilities/skills that go with them and the rest is pretty much 'D&D-like meaning that, if you've ever played D&D or one of the various games that is derived from it, you know how to play this game.  Aside from that, there is one chapter that talks about Space combat (as in ship-to-ship) as well as other odds and ends for dealing with travels in Space.  The one thing that the game doesn't cover is the possibility of being different species but this is hardly a game-breaker and could easily be added in if so desired.  Even so, given the vibe that the game gives, it suggests 'humans' travelling and exploring the stars, much like early Science Fiction shows would do as opposed to having alien crew-members.  Remember, Spock was half-Vulcan on a ship full of humans and pretty much unique in the classic Star Trek series which made it stand out compared to other books, movies, and shows in the 50's and 60's.  X-Plorer's is great stuff all around.

The book is nicely put together and, the one significant weirdness about the book is the placement of a page entitled 'How the Game Plays'. It *really* is something that belongs at the beginning of the book as opposed to close to the end... probably best placed before Chapter 1 and close to where the intro covers the 'what is a role playing game' section.  This does not detract from the book any and is just a mere observation.

X-Plorers should be easy enough to find and some FLGS may even be carrying a copy.  Of course, you can always order direct from Brave Halfling Publishing HERE and even I will have a few copies for sale on the Arcana Creations website in the next week or two.