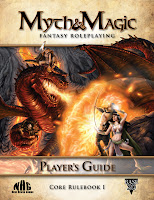 In the past few days, I've accumulated quite a few things I want to write about as far as various gaming books are concerned as well as other things that have either impressed or annoy me.  However, when I received the pre-release PDF copy of the Player's Guide for the new Myth & Magic game, I figured that this was perfect springboard to talk about a couple of things that have been on my mind.  For those who haven't been following what New Haven Games has been up to, they have been working on a game called Myth & Magic -- a fantasy RPG rooted in 2nd Edition AD&D design but adopting various d20 based refinements brought about by 3rd Edition.  In short, some might say that Myth & Magic is to 2nd Edition as Castles & Crusades is to 1st Edition and thus, not exactly a retro-clone in the strictest sense of the word.  For those interested in this game, you can get a taste by signing up on their forums and getting copies of the Starter Player's and Game Master's Guides.  This is what led me to the decision to back their Kickstarter effort for the production of the full-fledged Player's Guide and receiving the pre-release PDF of it.

I backed the project early on and I was initially eager about the project given my 2nd Edition roots.  However, as enthusiasm grew for the kickstarter and the discussion of some of the bonus material and stretch goals was being bantered about, I actually began to have some serious second thoughts about the project.  In the end, I let it slide given the strength of what I had already seen.

Flipping through the pages, I can say that this is going to be one sweet looking book.  The art is fantastic and, no small wonder here given that a bunch of the art was commissioned from past TSR-era artists.  The layout is clear and clean though with more wasted space (aka 'whitespace') than I would like BUT this is a pre-release copy and it may not necessarily reflect what the final product will look like.  I am hoping for some more of the type of art already gracing these pages.

As far as the content is concerned... what can I really say?  It really feels like a blend of the 2nd and 3rd Edition rulesets.  The proficiencies are here, the different XP progression for the various classes are still here, the inclusion of Talents (pretty much Feats), and a d20 based approached to task resolution and the three saving throw categories from 3rd Edition.  If you are familiar with both 2nd and 3rd Edition, then this will hold little in the form of surprises.  However, the rules detailed in the book are nicely outlined and the book does go to admirable extent to simplify and clarify the rules.  To be entirely honest, it seems to me that this succeeds at being a better '3rd Edition' and I do like it a lot.  You see, there were a number of little things that got me to set 3rd Edition aside and look towards other options.  I'm happy to say that Myth & Magic managed to do away and largely don't have those elements I find tiresome when I consider 3rd Edition.

So why did I start thinking about dropping my pledge for the Player's Guide if I seem to like it?  It's simple really... it's one of the reasons I got tired with 2nd Edition and TSR back in the 90's and something they repeated with 3.5.  Some of the bonus material that the backers are getting a additional/optional classes and races which will appear in a planned expansion (and so it begins).  This was set up as a stretch goal with a poll done to determine the races.  Of course I understand the problem with publishing a rule set for a game like this -- I mean, once you've got your core rulebooks, what else can the publisher sell you.  Any successful RPG game will follow this path and once it gets 'old and tired', they tend to rejuvenate the game with a new edition.  It's only a matter of time before we see Paizo consider updating their flagship game and they have already been putting out many other books to complement their core book for Pathfinder.  I doubt they will make some of the mistakes that WOTC have made though.  No, my biggest problem is that there is already talk about an expansion when the GM and MM guides still have a way to go before completion.

It's also increasingly the problem with Kickstarter as a platform.  Stretch goals are put in to get more money rolling in but some of these goals end up diverting resources which could be better spent on the original project to bonus goals instead.  In the end, you may end up getting a hugely successful kickstarter but, because the cost of the project gets increased to cover the stretch goals, the project isn't really much further along.  However, this Kickstarter is hardly the worst of the offenders.  But with the Player's Guide about to hit the presses, it's only a matter of time before New Haven Games goes about getting the next Kickstarter set up for the next core book.

Not that I necessarily need it -- I have plenty of 2nd Edition and even 3rd Edition material to draw from as well as many other compatible games and systems.  While I like the Player's Guide and the system, part of me questions if the game arrived too late.  If I had stumbled upon this game around 6 years ago, there is a strong probability that it might have become my game of 'choice' because of my familiarity of the material and how it was put together.  Back in 2006, there just wasn't this multitude of simulacrum type games and retro-clones and Castles & Crusades was pretty much the first with OSRIC coming out shortly there after.  But now, there are tons available if one knows where to look so, is Myth & Magic absolutely necessary?  Simply put, there isn't enough 'innovation' here but if a cleaned up, 2nd Edition derived system with some d20 type streamlining sounds good to you, then you'll love what Myth & Magic has to offer.
M
Posted by Moriarty777 at 12:14 AM