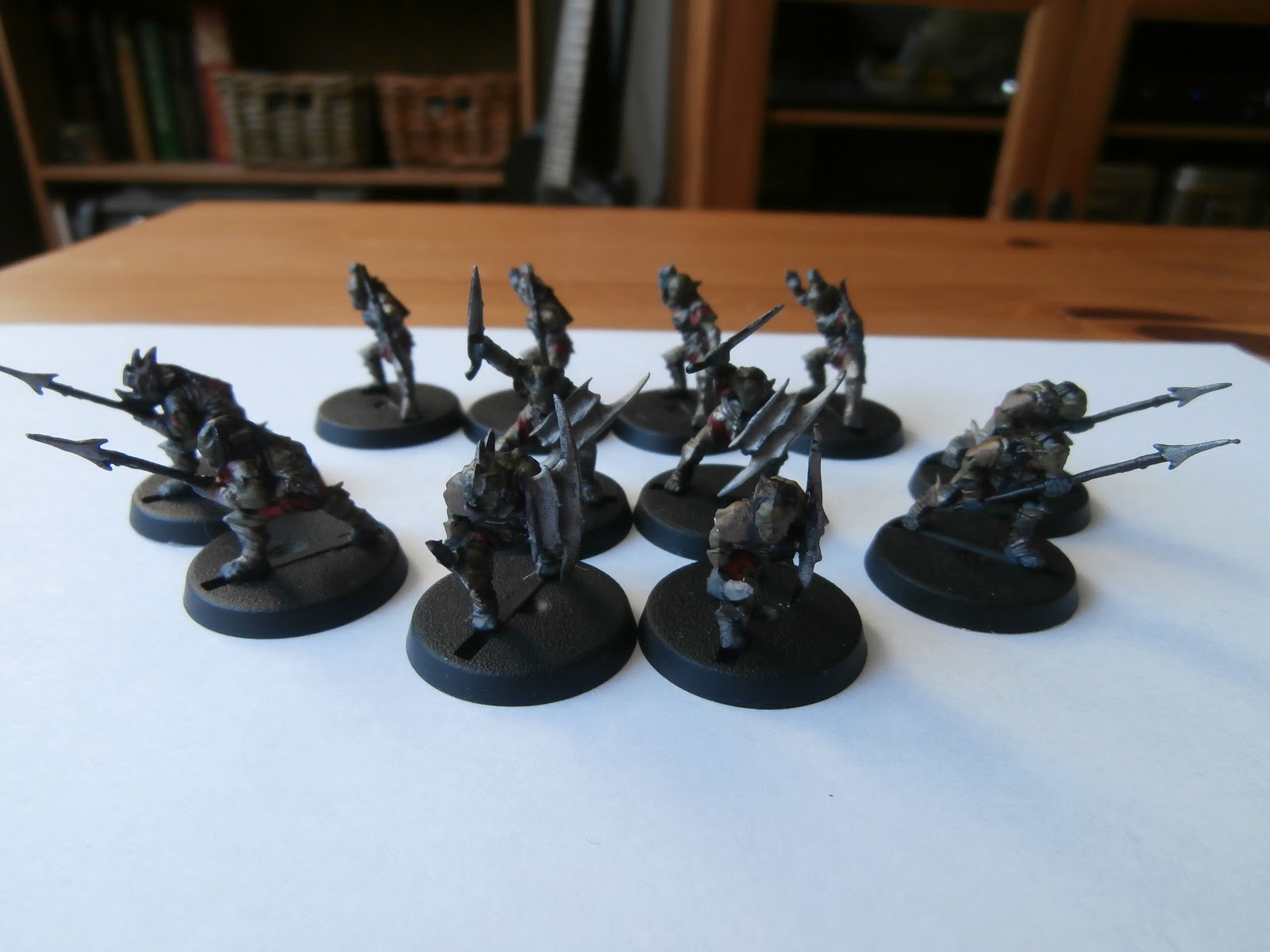 Around 6 weeks ago, I began painting miniatures in earnest.  I don't always have the time but after trying my hand at it, I realized how much I was enjoying it.

I had showcased some Goblins and Orcs and posted a variety of pics of what I titled 'Phase One'.  You can go back and check it out HERE.

Well it took me longer to get the work on these than I thought it would but I suppose that's my own fault.  In the past 4 weeks, I've been busy -- both with work and appointments as well as a chance to catch a concert, a couple of movie premieres, and even some gaming here and there.  I also stopped the work on this batch of miniatures to customize one other for a character belonging to another player.  However, I did manage to get an uninterrupted day yesterday where I did some writing, product planning, and paint me some goblins on and off during the course of the day.  Please forgive the quality of the pics in today's post... lighting was just not the best this morning so some of the colors and effect may not come through as well as I would have liked. 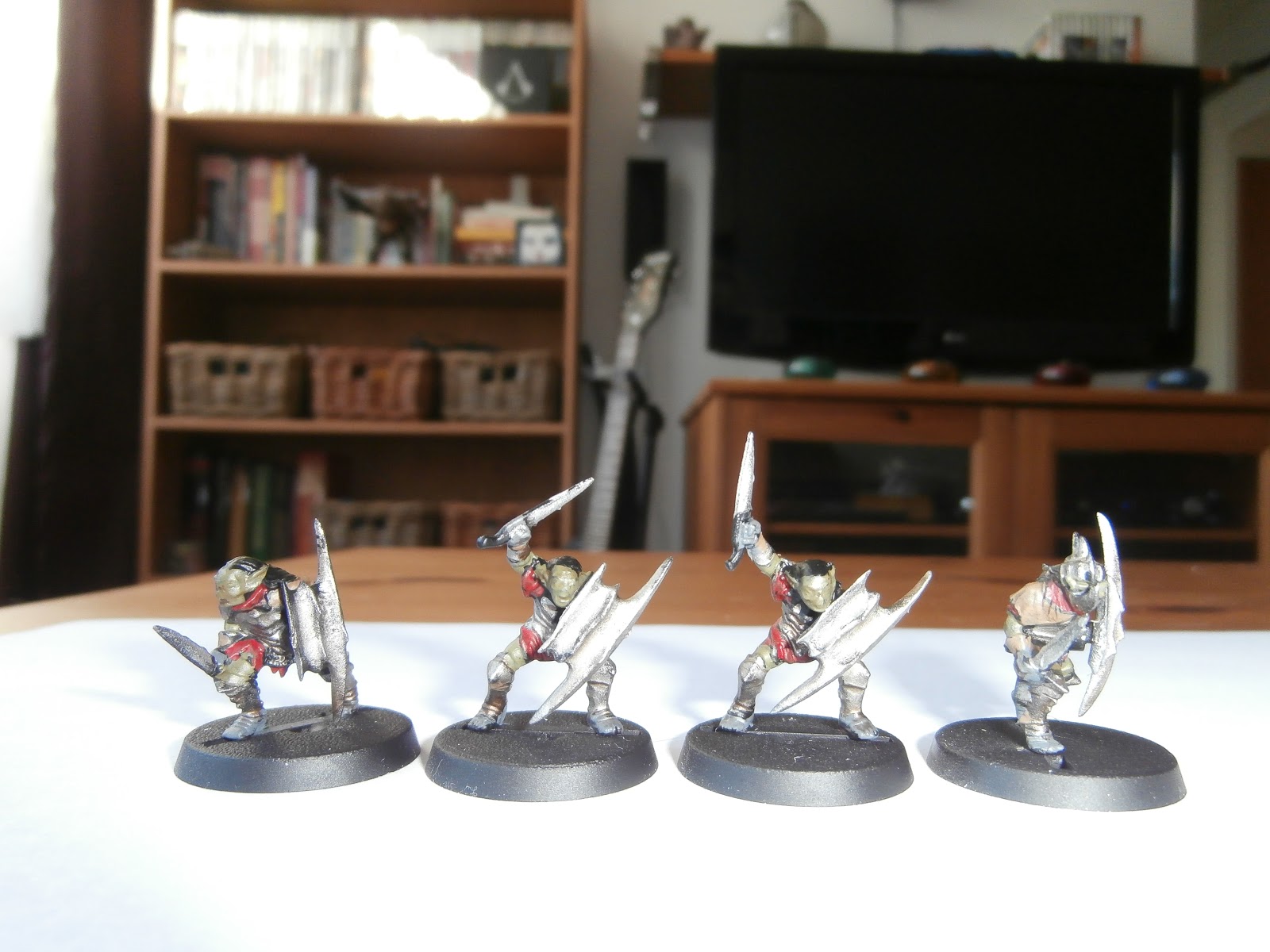 The armor basecoat and shading was done about mid-October and I used Citadel's 'Ironbreaker' for the base and some 'Argrax Earthshade' for the wash.  It was during this initial basecoat that I also realized I might run into some problems.

I realized that a some of the models (pretty much the spearmen) weren't as well defined in the back.  Now this could be one of two reasons.  All the the spearmen are hunched over with their spears so it could be that the detail for these were just not as well defined, or more likely, not a pronounced.  Now these goblins represent the first batch that I've worked on so it is entirely possible that I was a bit too heavy on the black primer I used.  I'm surprised a bit by this because if this is what happened, the other 8 goblins ... and 10 orcs on top of that don't have the same issue.  These were all primed at the very same time and the goblins were still on the sprue. 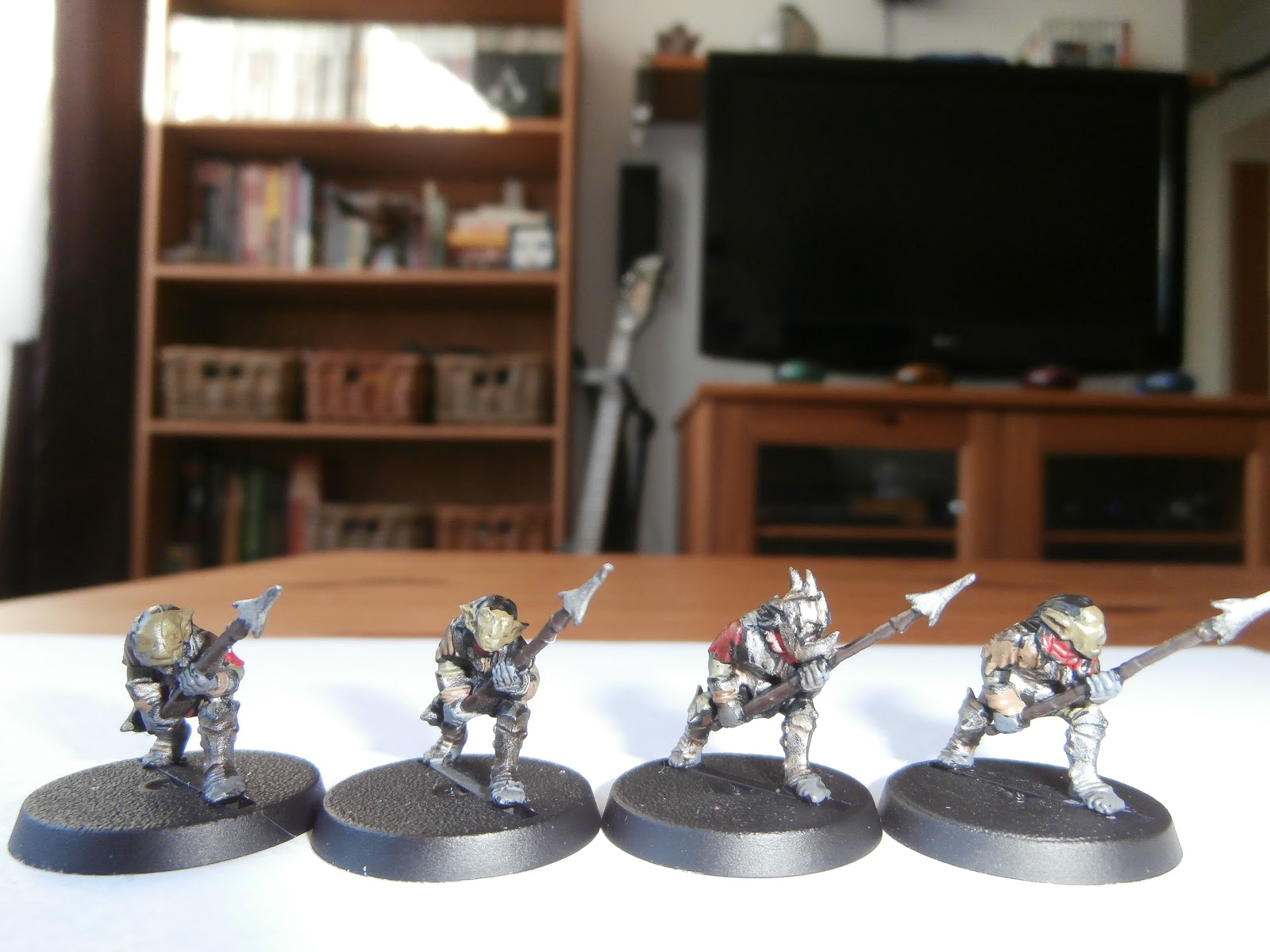 That said, it's amazing what one can do to correct this by just painting what's needed.  The other advantage here is that, being goblins, I figured some of the details could be a bit 'ragtag' which made things all the easier.

I used a 'Death World Forest' green for the skin, 'Mephiston Red' for some of the cloth, 'Rhinox Hide' for Bows, Quiver and strap, and spear. 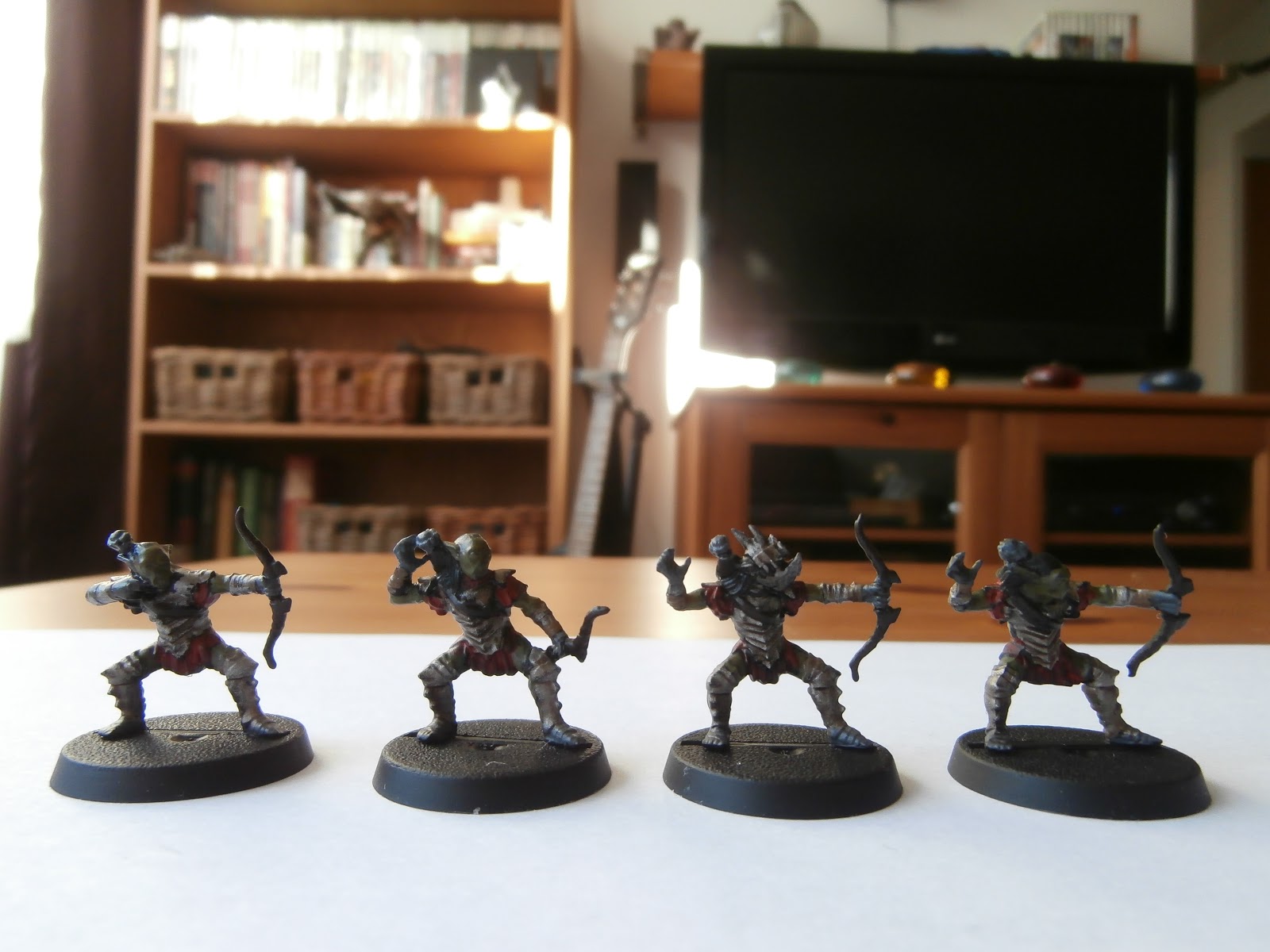 I also made liberal use of the 'Steel Legion Drab' which is used for the arrow shafts in the quiver as well as the straps/wraps for bracers and shin guards.  I also used the same color for more 'cloth' which I also shaded with the 'Argrax Earthshade' I used earlier.  Finally, the Mechanicus Standard Grey was used for the fletching for the arrows, gloves/hands, and I used them for the feet as well.  The same wash was used on the feet in particular to 'dirty them up'.

Are the goblins perfect?  No... I really didn't relish the thought of doing much in term of high detail work and even with some of the very fine detail brushes I picked up wasn't enough to give me the incentive to work more details on the face ... notably the eyes and mouth.  The goblins, being smaller than other figures were really a pain in the ass to do at times.  I used some shade (a wash) as well so that the face details would stand out a tad.

Being my first set of miniatures, aside from the robed figure I did for a fellow gamer, I am relatively pleased with my efforts.  The next batch of minis -- the orcs this time, have had their primary base coat applied this morning using a gun.  It was quite a time saver and given that they wore a lot of armor, I chose to use this as my starting base instead of a green for the skin.  They are also fairly bigger than those blasted goblins so I think painting them will be a treat!  However, given the smaller size of the goblins and the interesting shading and highlights I practiced on the robed figure, it gave me plenty of practice to build upon when I start the details of these orcs in earnest.