Well, as I thought, I was quite busy the past few days and didn't have much of a chance to get much writing done since my Thanksgiving note from last Thursday.  Among all the hustle and bustle, I did manage to do a wee bit of painting.  Here are half my batch of orcs with some base coat (only two colors) on them -- Work In Progress stuff: 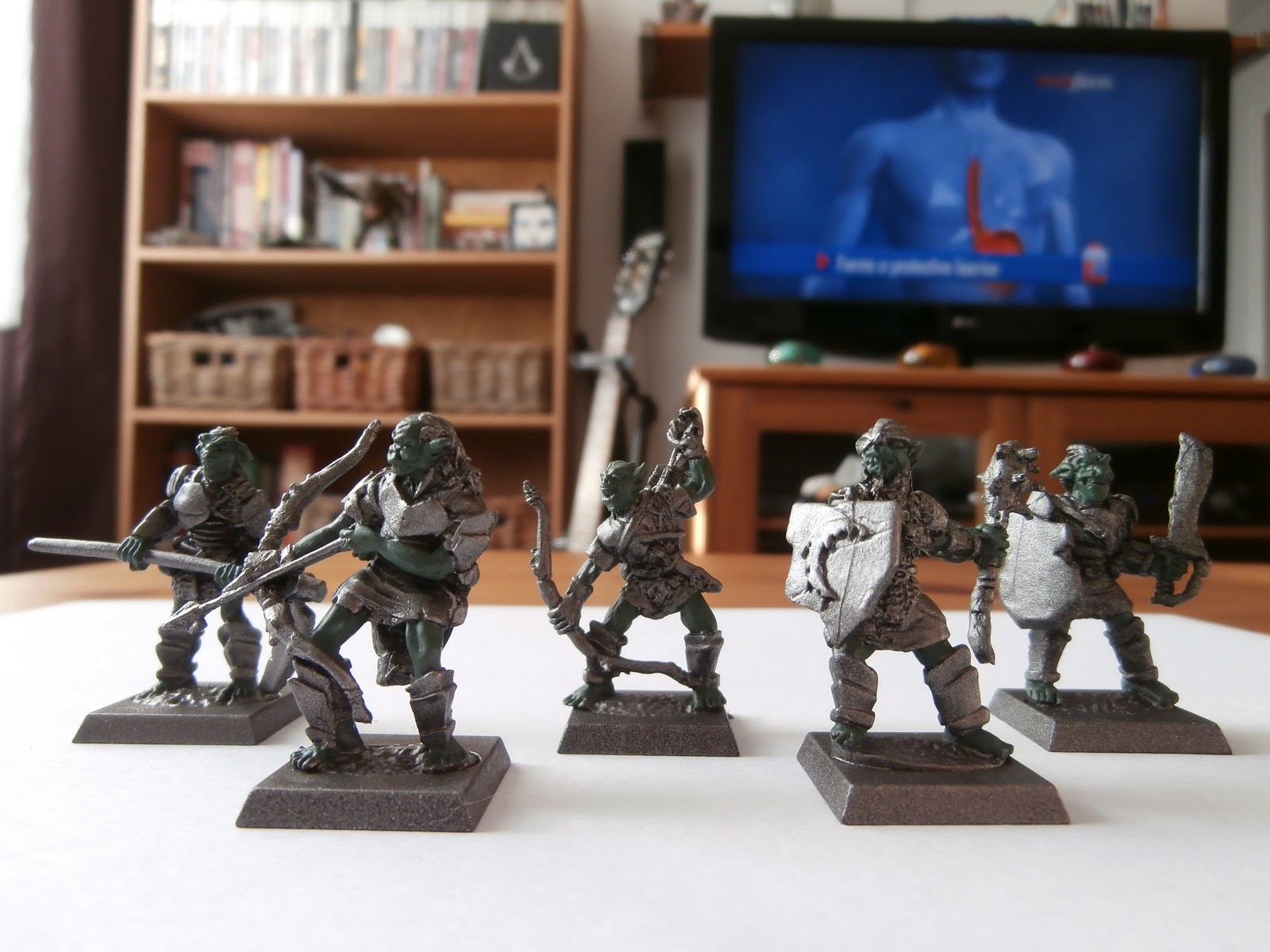 After the primer, I elected to do a basecoat of 'Leadbelcher' (citadel line of paints) given the armor and weapons.  I used a spraygun as opposed to my airbrush to quickly do the job on all 10 of the orc miniatures I had.  I should specify that the spraygun is also from the Citadel line and many believe it to be a low quality product.  I did pick it up before I got my hands on the airbrush but I figured it would be adequate for spay a good basecoat in a rapid amount of time.  That said, I had very little problems using the gun though I think a lot of the problems come from how some people use it and lack of maintenance once done with it.  The gun is designed to connect to cans of 'propellant' (basically cans of compressed air) and I think that this is part of the issue -- the gun works decently enough if there is enough pressure going through and if your paint is properly diluted.  When I first mixed the paint/water for the gun, it probably was still a bit thick which gave me some initial problems but I quickly sorted that out by adding a tad more water.  It's possible that the nature of the paint had a bit heavier pigmentation which is why a needed a bit more water.  As for the can of compressed air -- these are very much like the cans of compressed air you use to dust off electronics and such.  Using them will cause the can to get 'cold' really quickly and the amount of air and pressure coming out of the can becomes and less as a result.  This means that the pressure coming out of the can may no longer be adequate for what the gun needs to work optimally.

I didn't have too much to spray so once I had the right balance for the paint, spraying the basecoat was very easy.  The best part is I didn't actually spend money on the can -- a friend who moved on to a compressor had some left over and passed it along to me.  Of course, I have a compressor as well though I do need to get proper sized fittings for it -- something that I'm already looking into.

This past Saturday, I ended up waking a bit earlier than I had anticipated and, realizing I had a couple hours to kill, I decided to do some more painting and decided to add the basecoat of green for the orcs skin.  Given the size and nature of the miniatures, it took me a bit more time to do so I only managed to get 5 of the 10 done.  The next painting I do will be to do the other 5 miniatures before moving on to other colors.  The green color I used was 'Waagh! Flesh' with one of the newer/higher quality brushes I recently picked up.

In any event, I like how these are starting to shape up.