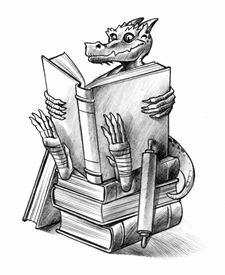 Kobold Quarterly.  Some consider this to be the spiritual successor to Dragon Magazine and for what it is, it is quite good.  I've always liked magazines usually I have some sort of subscription going on.  My most recent subscription to a (video) gaming magazine has run its course and normally I would just renew it or try a different one.  I should clarify that my latest subscriptions have been digital as well -- very convenient depending on the sort of magazine you are dealing with.  When it comes to 'tech', I don't find there is much value in holding on to physical copies of magazines so a less expensive and paper-free option for my tablet was a no-brainer.  The point is, I am currently without a magazine subscription and sadly, my current Crusader subscription can't count.  We haven't seen a single issue this year and, I believe there was only one issue released in 2011.

So, with that in mind, I decided it was time to give Kobold Quarterly a good look-over and the magazine is impressive enough.  From the modest first issue, there was been careful devotion to quality and hallmarks which are very reminiscent of classic Dragon Magazine.  I was also impressed at the pace the magazine grew and expanded from the very first issue.  By issue 4, it had more than doubled in page count and its subscriber base surpassed the 1000 mark with distribution happening world-wide.  The magazine is nothing but a success.

It has several interesting articles of course -- various Ecology articles... book reviews... and other regular columns and interviews of writers and designers in the industry.  There was also a great series on the Princes of Hell when the magazine first started off.

As the magazine matured, the look became more and more polished but the content, while still solid, interested me a bit less than the first few issues.  There's a lot of crunch in the pages of the magazine given the fact that there is a lot of 3.x, Pathfinder, and 4th Ed. material.  There were also articles I hated such as 'Optimizing Power Attack: The Mathematics of Combat'.  This sort of stuff simply bothers me and screams power gamer -- something I got relatively sick of when I played 3rd Edition.  I'm not saying these articles don't have a place in this magazine... the magazine certainly caters to a segment of the gaming crowd and others will won't be bothered by having a few articles they won't care for.  It's a magazine after all and it should have something for everybody.  The question I have is simple if the magazine offers enough for me.  The price of a digital subscription is reasonable enough given page counts they are delivering ($16 for 4 issues) though I wouldn't consider the print version  being comparatively steeper.  While I remember Dragon Magazine and it's various ads, I find the ads in Kobold Quarterly less interesting and somehow more intrusive given a couple magazines had roughly a quarter of the page space available devoted to ads for stuff I have next to no interest in.

Of course, the magazine is completely devoted to fantasy which is fine but I think I would like to see more varied material in its pages as well.  It's certainly not the perfect magazine for me but then again, such a magazine has yet to exist.  Kobold Quarterly is a solid offering nonetheless.  I will have to consider the magazine a bit further before I make a decision.

That said, I have heard there was some C&C material (a collection of 4 critters) in a recent issue (number 22) so this also reinforces that what is published in the magazine is dependent on the material actually submitted.  Maybe if there was some OSR related material in the mag (some Sword & Wizardry stuff maybe), it could endear itself to me further.  And if there already was, I am just not aware of it but I think it's a good idea to have.  ;)

Do any of the readers of my blog have had much exposure to Kobold Quarterly?  What are your thoughts if you have and would you recommend it or not?  Should I go back and read my classic Dragon magazines (thanks to the Dragon Magazine CD archive) instead?