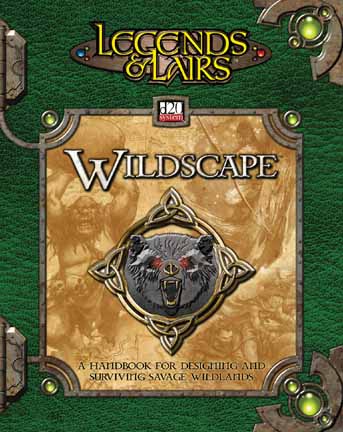 When you consider the 'Dungeoneer's Survival Guide', the 'Wilderness Survival Guide' will also come to mind for more than a few people.  And like 'Dungeoncraft', the Legends & Lair also has its wilderness related response in 'Wildscape'.

The 'Wildscape' book follows the pattern established in earlier books in the series which also happens to be a book not overly bogged down by d20 crunch beyond the initial section of the book.  Most of the material in here can be easily adapted in a variety of other D&D type games whether one prefers older game systems or the newer incarnations.

The book's first chapter is dedicated to character classes once again though this time, focus is given to druids and rangers and the addition of a handful of new wilderness related feats.  Unlike other books in the series, this chapter is actually smaller since little is done beyond the two aforementioned archetypes.  The second chapter focuses on running a wilderness based campaign with some material written on how to use the book and some considerations for wandering encounters in a wilderness setting.  Basic advice and solid material.

What follows though is another nine chapters -- each dealing with a different environment.  Chapters cover deserts, mountains, plains, waterways, swamps, arctic terrain, wastelands, and perhaps most importantly, weather.  Each of these chapters dealing with a different terrain cover various traits which are most prevalent and how they affect those traveling and living in it.  Consideration is also given to each terrain as it relates to combat and there is text covering various creatures which may frequent the area in question.  Some of these traits also function as hazards the way that Dungeon Craft deals with hazards.

The final chapter as previously mentioned, deals with weather.  A small host of tables are included for all sorts of weather conditions and effects which prove quite easy to use and navigate through.

The book in it's scope tries to do two things: cover a lot of different types of environments while remaining devoted to principally to terrain and weather.  While the book is well put together, depending on what you are looking for, the book could either be a perfect reference or fall drastically short of expectations.  For example, beyond terrain and weather, no consideration is really done about various types of magic and impact of spells out in the wilderness.  There are no rules for a forest fires, earthquakes, or other forms of natural disasters though some can be discerned in weather section if you want to see what effects might be for trying to do something in, say a hurricane.  Likewise, not much is given to considerations brought on by temperature such as hypothermia and frostbite for example.  What the book will give you is information on how to run the basics in a given area which will be, at the very least, a solid foundation.  I find that that Wilderness Survival Guide from 1st Edition ends up being a nice complement to this d20 book due to the approaches and sort of material that both books contain.

The book has about 168 pages of material with a few additional pages showing a preview for a different book.  Like the rest of the series, it is out of print but still readily available if you turn towards the second-hand market.  That said, it seems to command a higher price than some of the others in the series: $18 - $20 depending on the condition at Noble Knight Games and, oddly enough, doesn't seem to be available as a PDF.  As a d20 product, I'm not sure if I would be willing to spend more than $10 used for this book.  It's a good book and, like the rest of the series, I do like it a lot and the chapter breakdown make it simple enough to use.