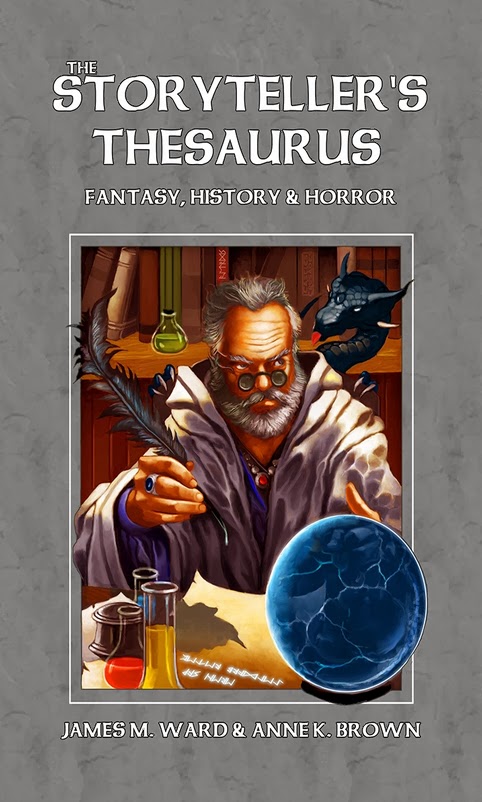 When considering gaming resources, everything from campaign settings, to monster compendiums, rule options, map packs, and game aids of all sorts come to mind.  What doesn't come to mind is a thesaurus.  Like a dictionary, a thesaurus can be a great tool for writers and others seeking a better mastery over a given language.  With the rise of self publishing and the OSR, many hobbyists want to share and perhaps even sell their creations with others.  A dedication to professionalism, artful whimsy, and great editing has led to some fantastic products over the past few years.  Many others are passed over and sometimes, it's because of the writing or editing.  For those who want to describe a setting, a situation, an object or a person, a thesaurus can be a helpful the way a dictionary can be helpful -- it's there is you pick it up and use it.  Oddly enough inspiration isn't the first thing that comes to mind when you think 'thesaurus'.

The Storyteller's Thesaurus published by Troll Lord Games is different.  Written by James M. Ward and Anne K. Brown, this thesaurus isn't exactly a thesaurus but should prove a lot more useful for anything trying to narrate something.  For starters, it isn't set up in an alphabetical format but arranged thematically.  In other words, if I wanted help or inspiration to describe a character I have just rolled up, I turn to 'Chapter I: Character Building' and find multiple categories such as Gender, Age, Size and Body Type, Facial Features, etc.  Each category will then have sub-categories.  For example, the Gender Category has Male, Female, Relational, and Terms of Endearment.  Male for  has over 45 descriptors starting from 'bachelor' and ending with 'young man'.

The idea is sound and has a lot of potential.  Since the book's organization is clearly different than what one would expect, some people may be at a loss of how to go about using it at first.  The concept may be good but it will take a bit of time before you get comfortable with working with it.  If you wanted to describe a forest, I suppose the best place to start would be 'Chapter 10: Geology, Geopraphy, Meterology, and Botany' (Trees are found here).  Woodland animals would mean you would have to skip to 'Chapter 15: Animals and Creatures'.  If you're looking from some more adjectives to describe this same scene, then you need to skip to 'Chapter 20: Descriptive Terms'.  There isn't a category for something like Forests which combines some of this material.

Of course this is the one stumbling block with this kind of organizational structure -- you could risk seriously overlapping certain things depending on how you want to go arranging and sorting them.  Thankfully, the book makes up for this by provided a detailed chapter listing and a 400 page index to accompany the previous 150 pages.

Flipping through the many pages, I only have a minor criticism with the resource which has to do with the American-centricism prevalent in some of Chapter 8.  The section on 'Ranks' lists U.S. Ranks, 'Air and Water Craft' gives U.S. Air Force, Army, and Navy vessels and crafts.  However, in the 'Ground Vehicles' section, a comprehensive sampling from 15 different countries is provided.  When it comes to 'Military Weapons', we're back to U.S. Army and U.S. Air Force.  I can understand that, being an American publication, why it would be U.S. prevalent but consistency is equally important.  The first option would have to keep things general.  The second one would have been to give further samplings for other countries as offered in the 'Ground Vehicles' section.  The third would have been to keep it U.S. Centric.  Personally, as I would have preferred something closer to the first option with a bit of the second.  Otherwise, these become lists which will not have much context for many civilians.


Aside from that, I find the book to be a great little resource.  Even going through the book and scanning through various sections could be enough to re-energize someone who is trying to write creatively.  Because of the way it is designed, it doesn't replace a traditional thesaurus but it may end up being a lot more versatile than one too.  It is not in print yet (a print run is still in the planning stages) but, as a PDF priced at $9.95 right now, I think it's well worth the price if you are doing some writing and hobby publishing.  Or maybe even if you just want to spruce up the stuff you do for your own game.  It is available HERE at RPGNow! (and other OneBookShelf stores)
Posted by Moriarty777 at 11:39 AM