Originally published on Sound on Sight:

Gaming can mean different things for different people and some are more inclined to engage in these activities than others.  The rise in popularity of video games led them to grow beyond the boundaries of an arcade to our very homes through our computers and our video game consoles.  We are, by our very nature, social beings and much of our gaming habits involve playing with other people as either teammates or opponents.  But before the prominence and accessibility to video games, we still found ways to play games and amuse ourselves.  Some of us may have been inclined to leave the concept of a board game behind us, thinking them nothing more than the likes of Sorry, Battleship, or Checkers.  Or, worse yet, you are a gamer and already know the reality of things but friends will be quick to remind you why they don’t play such games anymore after that one terrible experience with Monopoly that lasted for hours.

Board games are very much alive and well despite the digital generation we are currently a part of.  There are vast numbers of games available and many of them are easy to learn, simple to play, and offer a rewarding way to spend time with friends or family which doesn't involve sitting in front of a television screen or computer monitor.  It might be that you need to find the ‘right type’ of game to ease the ‘non-gamer’ into playing something not overly complex and long.  Maybe you just want to try and get that significant other to try and share one of your interests instead of having them run away screaming.

What you need in this situation is a ‘Gateway Game’.

The term is shamelessly inspired by the idea of a ‘gateway drug’…  In other words, these are games that ease you into a gaming culture where you might become more open to at least understand the passion that some gamers have and hopefully share some great and fun experiences with them.  While I would recommend any of these games as starting points, these games are also different enough from each other.  It’s worth comparing these and picking one that is better suited to the people you have in mind for the game. 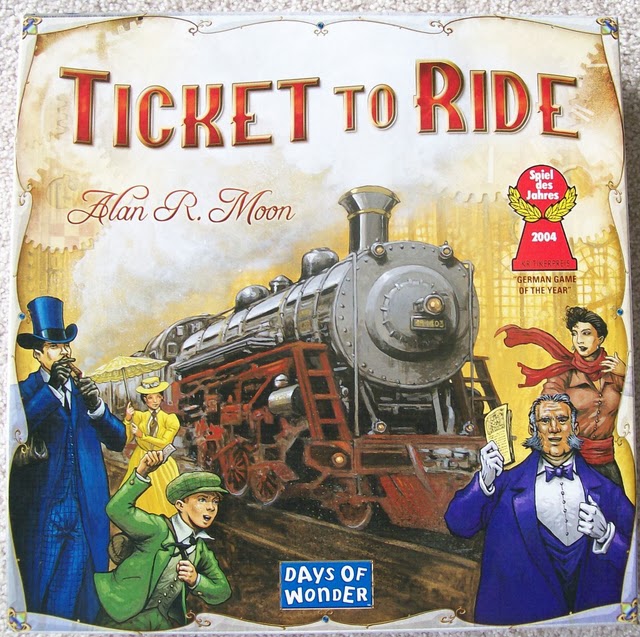 Ticket to Ride is a deceptively simple game to play where the goal is to build railroad connections between cities as determined by tickets each player attempts to complete.  Each player starts off with 45 train pieces which are used to construct their railroads.  On any given turn, a player can draw train cards (required to build railroads), construct railroads by claiming routes, or draw more destination tickets.  Claiming routes and completing destination objectives are the two ways to score points in the game and end game is triggered when one player has nearly exhausted their supply or train pieces (less than 3).  Any destination tickets which are not completed count against your total and the player with the highest total wins.

You can play the game with anywhere between 2 and 5 players and a full game shouldn't last much longer than 45 minutes or so.  Because of the game is fairly light on rules, it’s easy to teach new players how to play and have everyone comfortable with the game play within a couple of turns.  It’s also a game that a lot of people keep coming back to time and time again and it’s popularity has spawned numerous spin offs and expansions. 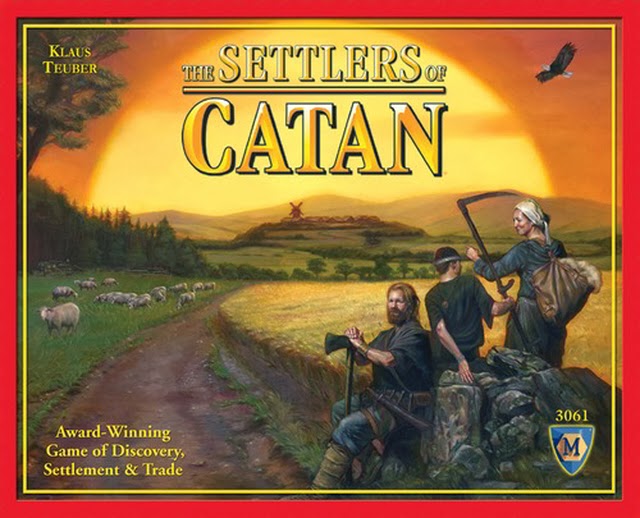 Settlers of Catan was originally published in the mid-90’s and helped bring about the demand for a new generation of boardgames in North America.  The game’s focus is trade as a variety of resources are needed by the players to settle the island of Catan.  As each player’s settlement grows, so those the number of victory points they have.  The first player to reach 10 victory points is the winner.

The resources in the game consist of Grain, Lumber, Brick, Wool, and Ore and the things you build each have different resource needs.  Distribution of these resources are dependent on where a player has their settlements and the luck of the dice.  The key to success in Settlers of Catan is very much reliant on a planing and trade with other players.

The original game can play up to 3 or 4 players but an expansion has been released to increase the player amount up to 6.  Game play is simple and shouldn't last much more than 60 to 90 minutes.  Many different expansions have also been created for this game and Settlers of Catan is generally considered to be a classic game with tournaments being held on a regular basis. 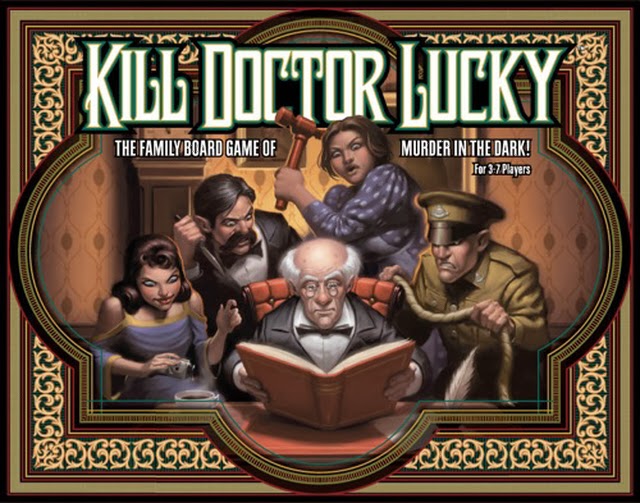 Kill Doctor Lucky was originally published by a small company called ‘Cheap Ass Games’ in the mid-90s but quickly grew to popularity due to its quirky and humorous nature.  Some fans of the game will jokingly describe this game as sort of a prequel to ‘Clue’ since the goal of the game is, as the name implies, to kill Doctor Lucky.  Each player wanders around the mansion hoping to corner the poor Doctor alone in order to pull off the perfect crime.  If the player succeeds without being thwarted, they win the game.

The Titanic Games version is a large and colorful update to the game and is the only version presently available on the market.  The game can be player between 3 and 7 players within about 45 minutes. 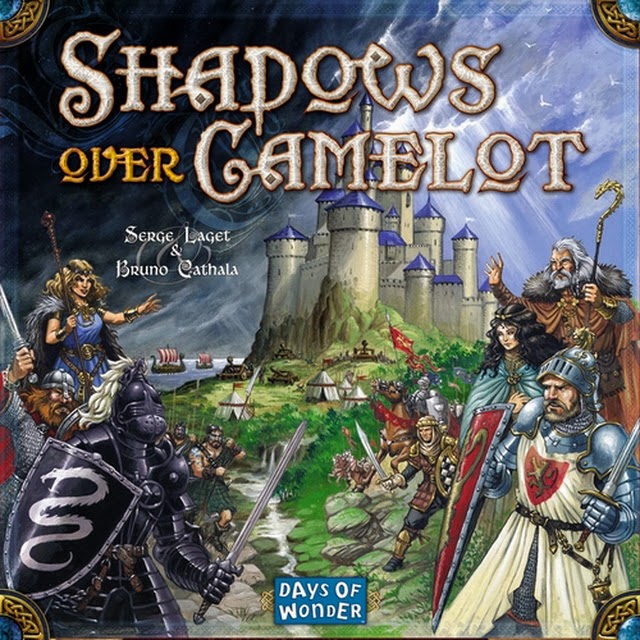 Shadows Over Camelot is an Arthurian themed board game with one notable difference compared to most other games.  This game is co-operative.  In this game, you work together to complete a variety of quests in order to try and beat a game which is designed to defeat you.

Each player takes their turn and each turn goes through two distinct phases.  The first phase is the progression of evil which will either be drawing a black card, losing a hit point, or putting down a siege engine outside of Camelot.  Afterwards comes the second phase which is the progression of good.  In this phase, you can move to a quest, work to complete a quest, play a special card, or if still in Camelot, fight off siege engines or collect resource cards.  Quests that are completed will mean you get white swords to place on the round table and failed ones means black swords are placed on the table instead.  Too many black swords on the table or too many siege engines outside Camelot means the game is lost.

Shadows over Camelot is an enjoyable though challenging game and, to make things more challenging, there is a possibility that one of the players is also a traitor that will be undermining efforts to collectively win the game.

At first glance, the game may seem a bit abstract as far as a traditional game board is concerned.  The game functions more with cards with the board serving as trackers for the progress of the game.  Like other Days of Wonder games (like Ticket to Ride for example), the game is simple enough to pick up within a couple of turns.  However the game has enough depth to keep fans of the game playing for years.  The game plays 3 to 7 players and normally will run about no more than 90 minutes.

Citadels is not a board game — it is a card game but a fantastic one set to the theme of medieval fantasy.  The goal is to build the greatest city before others beat you to it.  The game takes place in two phases, the character selection phase and the action phase.

The characters you play in the game will be one of eight… they are the Assassin, the Thief, the Magician, the King, the Bishop, the Merchant, the Architect, and the Warlord.  Each have their own special abilities and who is playing who is determined anew each game turn.  The selection of characters is done in secret but the play order of the characters never changes.  The assassin for example always goes first.

Each player takes their turn based on the character they are playing and, in their turn, they can use the special character ability and do what they need to do in order to build districts to their city.  The first player to reach 8 districts wins the game.  You can play the game between 30 and 60 minutes with 2 to 8 players.


All these games are accessible to new players and no game will last more than a couple hours with the average game being about an hour.  Obviously, those who decide to pick one of these games up to try with some friends are encouraged to go through the rules carefully first in order to minimize and confusion when teaching the game to others.