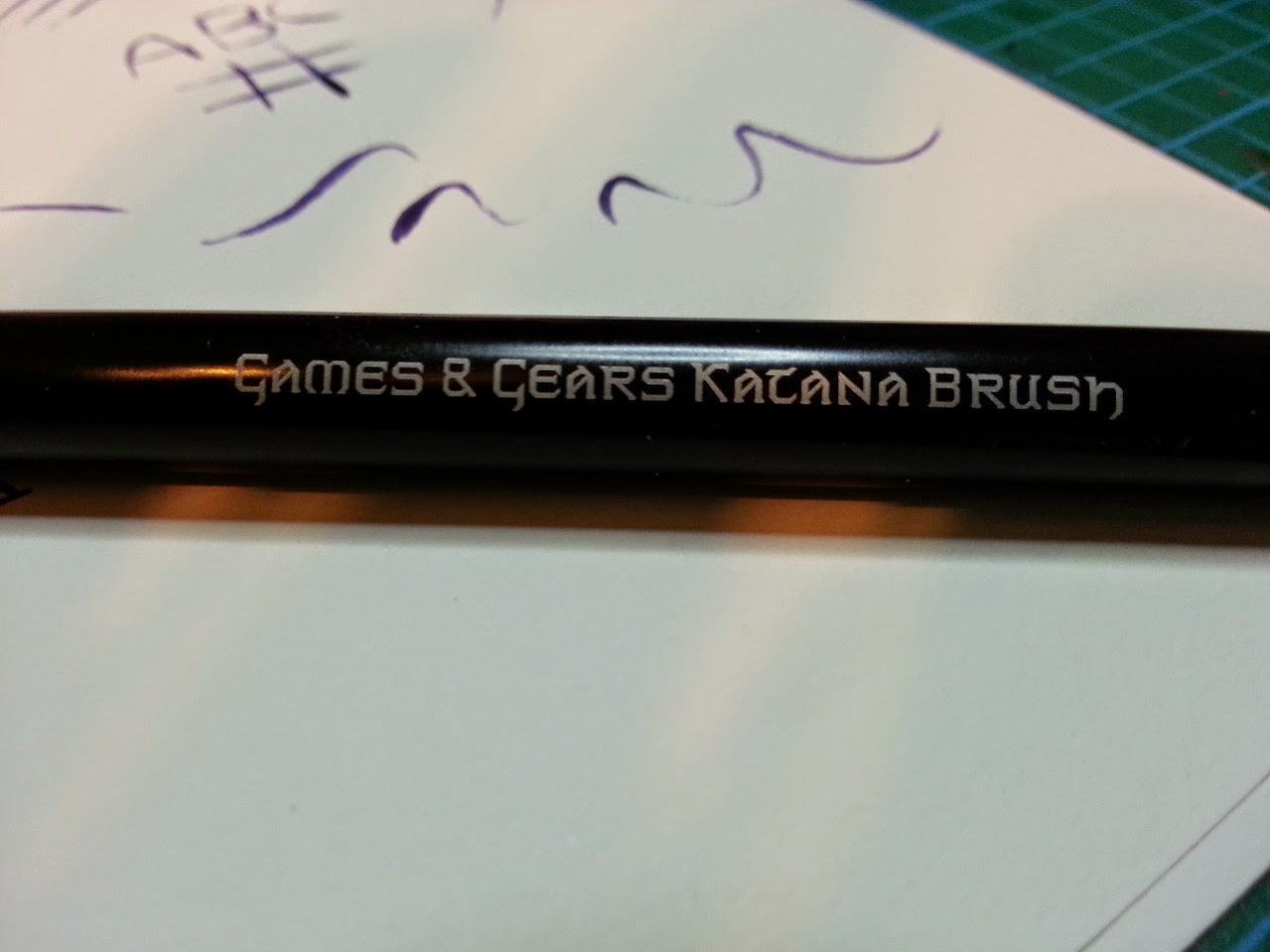 The Katana Freehand Brush was part of the Games & Gears Ichiban Studios Kickstarter than ran last year.  Now I've had my brushes and have been using them since last summer (I give an initial review of them HERE).  At some point this month, I will revisit these brushes since I've had a lot more time with them and have used them almost exclusively since July 2014.  However, the Katana Freehand Brush was one of those items promised in the Kickstarter (a stretch goal add-on) that is only now being delivered.

The Katana Brush is a silicone brush meant for freehand work.  Now some people can do freehand with their brushes really well but usually comes through a lot of practice.  Others seem to have a natural knack at it since they were already artistically inclined.  The Katana Brush is really meant to be an aid for those of us wanting to gain more control when trying to do fine lines, edges, or other details.

Now, this isn't the first time I have come across something like this so I was a bit skeptical at how well this could possibly work.  A couple of years back, I picked up a tool to do this same sort of thing.  It was called 'The Incredible Nib'.  Actually it is the 'Original' incredible Nib.  It more or less worked too but instead the tips (a different one at either end) were of some sort of wood fibre which helps hold some of the paint but gives the user very good control.  It didn't prove as useful as I had hoped though in part because the tips were a bit large for the kind of work I normally did.  The idea of a flexible and silicon tip intrigued me though offering a compromise between the rigid pencil feel of the 'Nib' and the flexibility of a brush.

Now, having played with it, it's not all that bad. 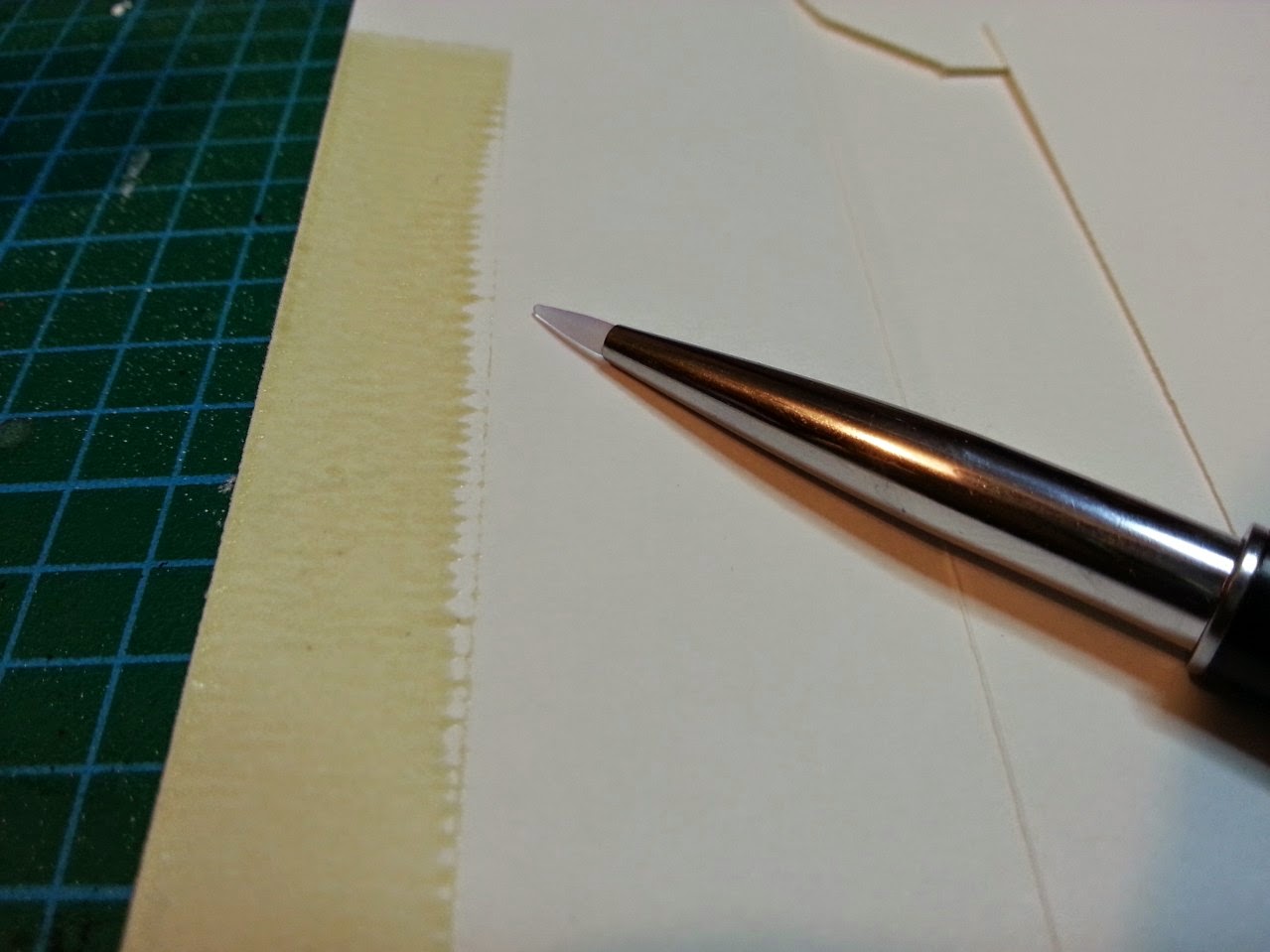 The flexibility does take getting used to as well as trying to write anything with it.  Actually, writing with it is not worth the aggravation in my opinion.  The silicon doesn't absorb the paint which is a very good thing and it does seem to cling to it and won't pool which is a great thing to hear.  However, it won't pick up too much paint either and when trying to write, a loaded brush stroke with the Katana may cause 'thicker' strokes as you are trying to write.  In other words ... if you are set to write something with the Katana Brush, try it out a few times to get comfortable.

Of course, that is common sense advice but it bears repeating.  What is worth practicing and experimenting with will be the paints you choose to use.  Depending the paints and their consistency, the quality of what you will get will vary on the paints used, how well they flow, and whether or not you are using some sort of slow-dry medium.  Using Citadel paints and some water, I was constantly dipping my tip into the paint to keep working and some of the paint would invariably dry on the silicone as you work.  If it's dry, it won't transfer to a different surface.  However, unlike a traditional brush, the hairs won't split when trying to do some prevision work along an edge or surface.

The good news is that, once you've figured all of that out and tried the Katana a bit, you can do thin and straight lines with relative ease within minutes of first using the brush.  Curves are equally simple to do and the maintenance is also tremendously simple.  Use water to clean and any paint still on the silicone can easily be scraped off gently with your finger.  It's not a bad tool to have in your brush kit even though it didn't perform as well as I would have liked.  Than again, my expectations for it were very high. 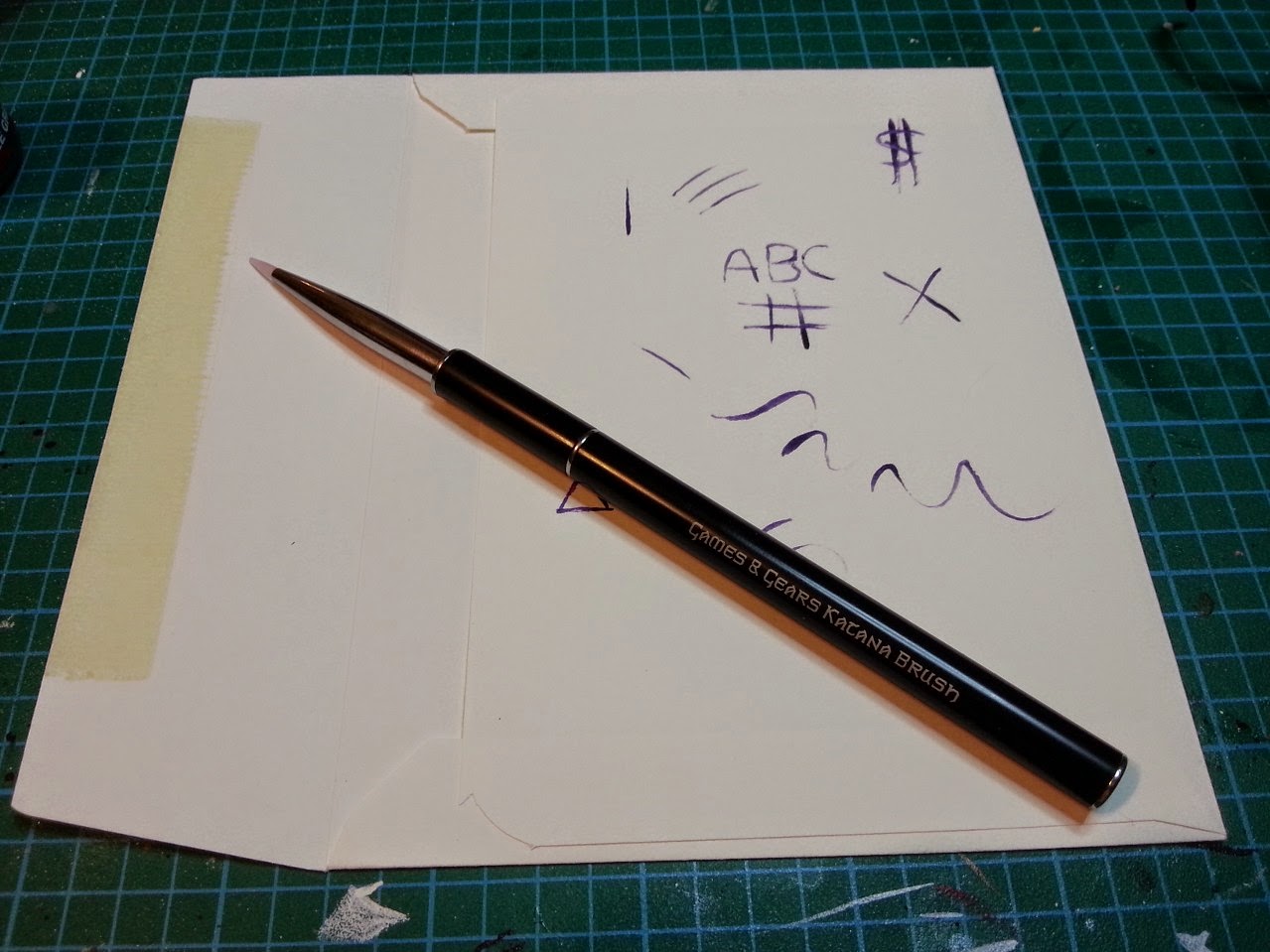 I don't regret getting it but the real question you have to ask yourself is whether or not this thing is worth the £10.00 that Games & Gears is asking for.  At today's exchange rate, we are talking about $14.75 USD (or $18.75 CDN) which is a bit on the high end if you ask me.  If you truly think that you need a new approach to help you with your detailing on the miniatures or your looking at doing a lot, then maybe the Katana Brush will prove to be a great investment.  However, if you already have a handle with the work you do and have gotten along fine without one, then maybe there isn't a reason to invest the money here.
Posted by Moriarty777 at 12:29 AM