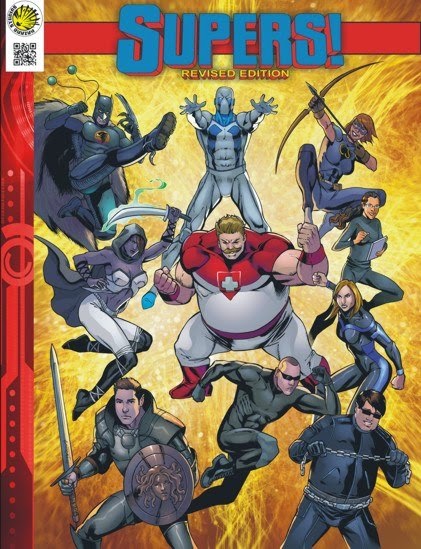 My history with the Superhero Genre in RPGs has been considerably more limited compared to Fantasy and Sci-Fi.  I first picked up the Marvel Super Hero Basic set (revised) published by TSR back in 1991 and, subsequently, the Advanced Set in '92.  I broke from my regular AD&D campaign at the time to do Marvel; my group created characters and I created and narrated the scenario for these 'would-be' hereos.  It lasted all of one session.

I liked the game and, along with my friends, we collected and read comic books as teenagers.  However, when players don't really want to play something and just rather continue with what we we doing, it can seriously derail a new game.  We went back to what we were playing and the MSH got shelved.  However, I remember liking the underlying 'FASERIP' system and the charts.

Almost two decades later, I was invited to join a gaming group for their Super Heroes campaign -- a campaign run by Andrew Collas, the editor-in-chief for Zenith Comics.  It was fun and I had a blast.  Over the past few years, I have gamed on and off with this group playing a variety of campaigns ranging from the Super Hero genre, Sci-Fi, and Fantasy.  It always comes back to the Super Hero genre with this group and generally, the heroic motif is a strong one in all of the stories and campaigns.  With a Super Hero game, there are many systems to choose from.  We've played games using the FASERIP system, BASH!, some homebrew rulesets, and just recently, Supers! (revised).

I was first introduced to Supers! prior to the IP changing hands.  It was originally created by Simon Washborne and the game was a rules-lite system that promoted narrative play for a Supers RPG.  It was a simple enough system to grasp but didn't go over the top with a burden of details or crunch.  It suited many a gamer who was looking for a solid basis for a Super Heroes game without raising the bar of accessibility for newcomers.

When the rights to the game were transferred, Hazard Studios, proceeded to develop a revised edition of the game and ran a successful Kickstarter campaign for the project's funding.  A couple talented authors help bring the idea of a revised edition of Supers! to reality and the rest is history!  This new edition tightened the mechanics somewhat, introduced benefits and hindrances to the system, broadened the options, expanded the powers and skills, and presented new options and provided greater detail than the original version ever did. The fan community received the the new edition very well too and after playing it myself, I can wholeheartedly agree that this revised edition of Supers! is a very solid offering.

While I like the simplicity of the original Marvel Super Heroes system (FASERIP), I never embraced it.  The game is very much the same it has been since the late 80's and could use with some refinement.  I took a liking to BASH! or, more specifically, BASH! Ultimate Edition though.  BASH! reminded me of what Marvel Super Heroes under FASERIP could have been like if it got a bit more refinement.  Yeah... the mechanics are different enough but retain a chart where a pair of d6's are rolled instead of percentile dice.  Unlike the original MSH game were you were more or less expected to play established Marvel characters, BASH! was meant to really create and customize your own characters. 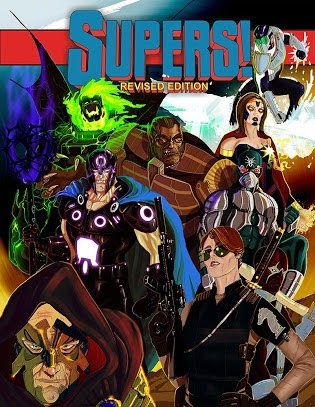 Supers! Revised gave me a bit more of what I was looking for, even if I didn't know it at the time.  It has the same sort of flexibility that BASH! but keeps the granular details to a minimum.  That isn't to say that BASH! isn't simple and streamlined in its own right but Supers! manages to keep things a bit easier for the players and GM running the game.  However both BASH! and Supers! are on the same end of the rules-light / streamlined spectrum as opposed to something like the Hero System which is more in-depth.

Character generation is easy -- it is effectively a point-based system (or rather dice) where you will allocate dice between Resistances, Aptitudes, and Powers.  Beyond that, there are specializations for Aptitudes, Boosts and Complications for the Powers, and you can additionally purchase Advantages or get stuff back if you take Disadvantages for character generation.  The amount of dice you get to spend will be determined by the GM based on the campaign being run.  It takes very little time to create a character once you have a concept in mind and a very basic familiarity with the rules.


Mechanically speaking, the system couldn't be simpler.  Resistances, as I mentioned, are very much like the stats found in most other RPGs and are primarily used for the purposes of saves and checks.  Skills and Powers also work in the same way and the system is basically a system that involves opposed checks or target numbers.  What makes this game stand out a bit more is the flexibility of the system at play.  For instance, when an attack is made against your character, you select how you defend.  Do you have armor which will allow you to take a hit?  Do you have a movement power to enable you to get out of the way such as flight or teleportation?  Do you want to counter the attack with one of your own in terms of neutralizing it?  And so on... Supers! allows for a greater narrative on the part of the players as well as a simple flexibility.  Say you use a power to defend, you roll to see if you beat the attack or not.  If you do, then great, no damage but there's a catch: you won't be able to use that same power to attack in the same round.  On the other hand, if you fail, you take damage and unless the attack is specific, this damage will count towards on of your four Resistances (which are like a characters ability scores) and lower them.  If any of them are brought to zero, you character (at least temporarily) is out of the fight.

As for the rest of it, you have a simple system of advancement, some optional rules on top of templates, a roster of characters, a bestiary, and a sampling of vehicles.  Everything you pretty much need to play the game is in the book save for a setting.  The book even provides rules for miniatures and a random character generator!  I find it hard *not* to sing praises for this system.

Is it all good?  Well, despite the age old adage "Don't judge a book by its cover" -- some invariably will.  The book is made available through print on demand which, in itself, is not a bad thing but the color paper quality is not one you would find in a premium product.  As far as the art is concerned, there are a lot of great pieces throughout the book but the quality of artwork isn't consistent in the book.  The font is nice and large size making it easy on the eyes but more work could have been done to tighten up the layout of the text instead of just going with a default 2-column page view with standard full-justification applied.  The end results is a book that falls short of looking like a professional product despite being a very well developed and fantastic game system that rivals some of the best systems the genre has to offer.


If you want a good and rules-lite system and don't care for a super-slick presentation, then you should really consider to give this game a go.  You can find it through OBS services such as RPGNow! (HERE) for an extremely reasonable $10.00.  You won't regret it.