Just like another 14,963 backers, I was patiently waiting for my shipping from Texas courtesy of Reaper Miniatures.  In what seems like ages ago, I embarked on my hobby of painting miniatures because of the first Bones Kickstarter that Reaper did back in 2012.  In anticipation of those rewards, I picked up a starter set from Games Workshop and painted some goblins.  And then I painted some more... and then, eventually, I got my package in 2013.  As a Canadian backer I was one of the lucky ones as my larger package shouldn't have been sent out as early as it was and, when there were some UPS issues, it slipped under the wire from being effectively recalled.  Or something like that.  I didn't care 'cause I got my stuff!  When the folk at Reaper decided to do another one, I went in again.

The value of the first one was truly tremendous and, frankly, bordered on the ridiculous.  The Vampire pledge gave you a package of miniatures which numbers around 240 or so (I got two).  The add-ons were also priced low (Cthulhu, a $10 add-on, now retails for $40).  As an added bonus?  Shipping was free to Canada as well as the States which is in keeping with their online store policy of free shipping over $35 of purchases.

Bones II was still great value for the money but no where near the value of the original.

Fans are not so easily dissuaded.

In comparison, I have to say that my haul this time around was smaller but I certainly spent more money.  The fact that Canadians were charged shipping and that the cost of shipping is tantamount to highway robbery, having the privilege of paying customs is never amusing.  At least the package was transferred to Canada Post instead of continuing with UPS ... those brokerage fees are even steeper.  Sadly, back in the start of January of last year, the Canadian Dollar and US Dollar were close to being at par with each other but that isn't the case now.  The taxes calculated for customs were approximately 20% higher than they would have been over a year ago when I paid and locked in the order...  So, with shipping and customs, I was hit with close to $150 on top of what I paid for in total for the order and that's a bitter pill to swallow.  I can only imagine that the first Bones Kickstarter would have cost me more in shipping and customs (I dodged a bullet with the first Kickstarter -- I did not have to pay any additional customs fees). 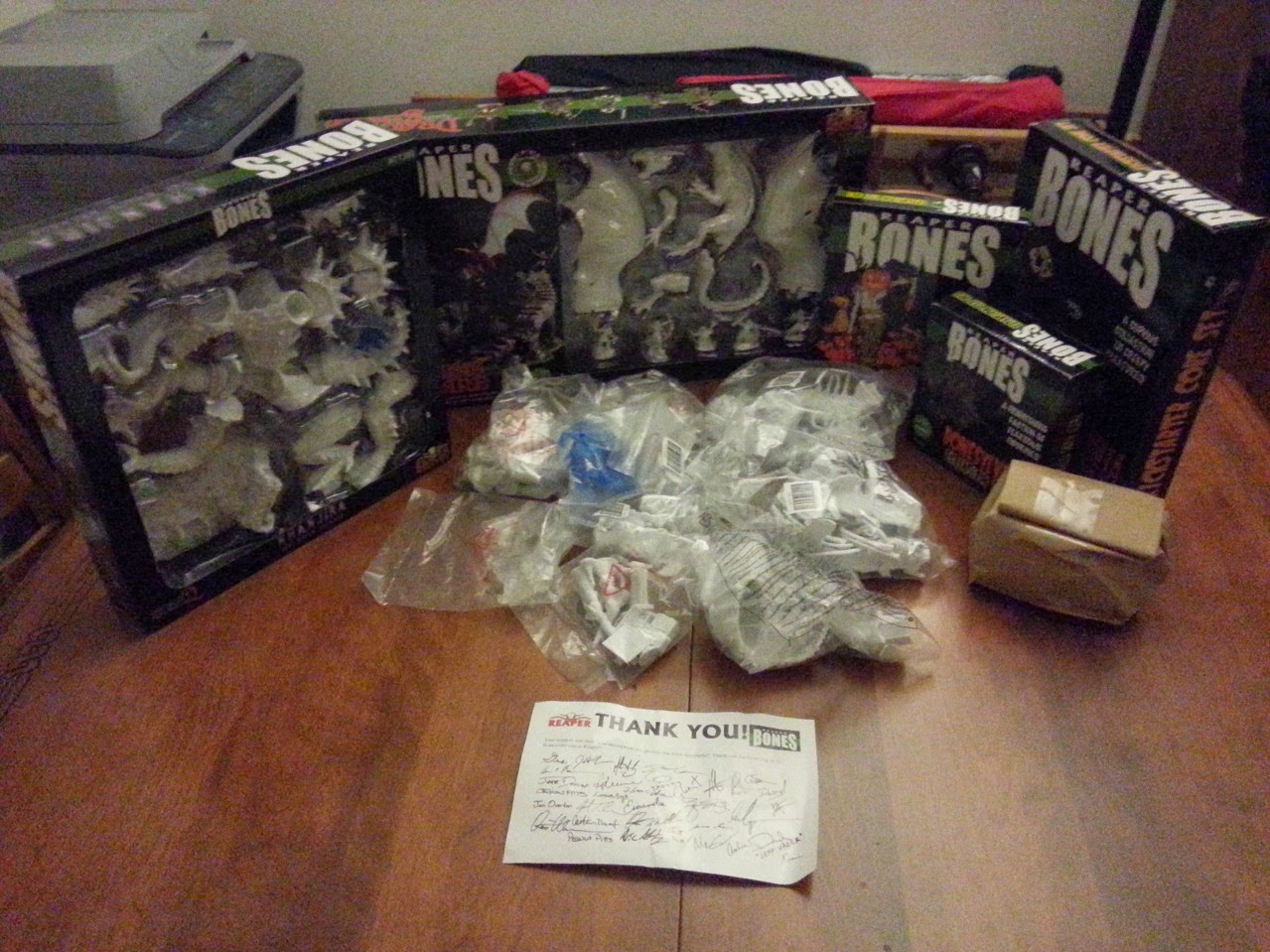 It occurs to me that, despite the saving of participating in the Bones II Kickstarter, the shipping fees and customs does negate a lot of the benefits from participating in the first place.  I don't regret being part of it and, if Reaper Miniatures does a third, I will be tempted and could easily see myself going participating if they did a third one (I don't think the recent CAV one counts).

Despite the extra cash, there are a couple of points worth highlighting.  Reaper learned a few lessons from the first campaign they did.  The orders were quickly sorted out and shipped to backers once they had everything one hand.  Fulfillment on Reaper's side began and finished within a couple of weeks since they began shipping.  From the point they began on February 9th, it took just over two weeks for me to get my package.  I think part of it was because of how they went about doing some of the packaging (each set got it's own box) and there seemed to be fewer separate add-ons as well.  The team at Reaper kept on top of things and were able to quickly adjust when problems came up.  There is a reason I love dealing with Reaper so much and how well this Kickstarter went just highlights all of this.

My own package included the core set, expansion sets 1 & 2, Khanjira, Dragon's Don't Share, the Thank You Set, and twelve other assorted add-ons.  I did want more but, doing so jumped my shipping costs in a much higher bracket.  There are certainly a few things I'm looking to order once they are made available on their online store.

Not that I need more miniatures at this point.  ;)