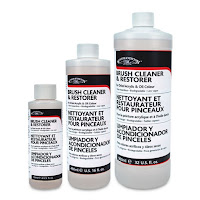 A few months back, I was having a terrible time with some of my Games & Gears Ichiban brushes.  They were part of a Kickstarter that I took part in and I was lucky enough to get in on the early birds.  My original review of them were favorable (can be read HERE) but I did run into problems with them after continual use (as I wrote HERE).  I am happy to say that they DO stand behind their product though, and I got a full replacement set and then some. However, in the interim, I did have a chance to try Winsor & Newton Brush Cleaner & Restorer in an attempt to try and fix, or at least improve on some of the issues I had been having.

Up to this point in time, I've been using The Master's Brush Cleaner and Preserver soap which easily did the job.  However the belly of my brush heads on the Ichiban brushes were much thicker than what I had been accustomed to using.  These brushes were nice to paint with but the thicker head could mean that some of my pigments were not getting cleaned out properly and could have been responsible for some of the issues I had been experiencing.  In any event, I didn't have much to lose by trying.  I new replacements were coming but I didn't just want to throw these problem brushes away either.

Well, the first thing I did when I opened to bottle to pour a bit was spill it naturally.  I have a habit of painting over a cutting mat and, cursing my misfortune, I quickly went to the next room to get sufficient paper towels to clean up the mess.  Boy did I get an interesting little surprise.  You see, I've tried cleaning little spots of paint here and there -- sometimes a drop of paint will miss that mat entirely end end up on the table surface instead.  Some of this paint is stubborn to clean up.  When I wiped up the spill off the mat, I had paint that had been there for a couple of years just come off.  Hell, the mat has a printed grid pattern of lines (it is a cutting board afterall), and this came off as well.  I was simply blown away with how well it worked and what it did in a mater of less than 20 seconds. 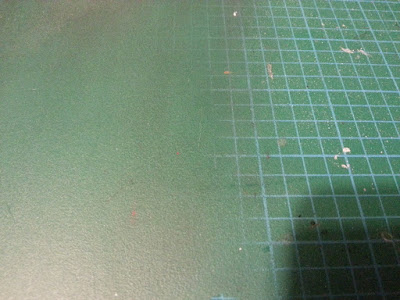 In true form, I then looked at the instructions on the bottle just to be on the safe side.  The stuff is labeled as non-hazardous, biodegradable, emitting low vapor.  Sounds perfectly fine and even safe.  The cautionary note on the side of the bottle reads as:


Use a non-plastic container for soaking.  May damage painted, varnished, or plastic surfaces.  Avoid contact with brush handles; finish may be removed.

In any event, I had a small container that I soaked the brushes in question in... overnight.  They seemed better and some of the brushes actually did improve.  I didn't miraculously fix my problems with the brushes but they weren't as bad.  I decided to do the same with my older sable brushes but wasn't as careful.  Some of the handle ended up soaking in the cleaner.  Needless to say, the warning was correct.  I have three brushes that basically have 'bald' spots.  I cleaned them up as best as I could and, while the handles now look a bit 'funky' the brushes themselves are fine.

I even have some game science dice that had some permanent ink or paint applied that was NOT coming off.  They essentially had to be re-inked and I soaked this a bit to help dislodge the unwanted numbering still in place.  It was a bit of work but it did work and fairly well.  Due to the nature of the plastic, exposure to the liquid was kept to a minimum.

In short, it is a great tool for the painter.  I wouldn't say it replaces my brush soap but it's a great way to restore certain brushes after prolonged use to extend the life of your brushes.