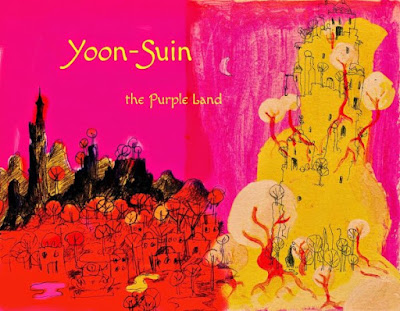 Yoon-Suin... the Purple Land.  A short while ago, I had absolutely no clue what this was.  But, it was released earlier this year and I stumbled upon it quite accidentally as I was searching for something else that happened to be game related -- likely some other bit of old-school or indie press material.  I was immediately intrigued and, coming off the relative high of 'A Red & Pleasant Land', I made a note of it and recently ordered a copy.

Upon receiving it, I was somewhat irked and disappointed.  For starters, the book itself is an unusual one but I knew that before I ordered it.  However, given the odd 9x7 choice for the book, I think the layout could have been better.  As a campaign kit, the tables are laid out poorly in some cases and tables do form up a large portion of the book.  Sometimes, the simplest of problems are immediately apparent just by flipping through.  Page 87 for instance has in the Noble House table and under the NPCs column for dice result 1, you have 'Patriarch/Matriarc' with the last 'h' on the next line down albeit also centered.  In the bestiary section, you have another different layout choice being a two column decision for different texts.  One portion is two-thirds the width of the page and the remaining third has other text presenting different but complementary information to what else is on the page.  This isn't a bad idea but this smaller bar of text could have been boxed or at least formatted a bit different in terms of the text itself.  All the text is the same font and size.  Of course, trying to find a good way to place it on the shelf is a whole other challenge with the way it will stick out in both size and very pink color.  I really think a different shade might have worked better given that this book is about the 'purple land' and all.

But that is all cosmetic and a lot of this can be forgiven if one takes the time to actually review the content of the book.  As the reader begins to the the book and go through it with some time and care, it becomes apparent why this book has gotten the praise it has.

The introductory section of the book is written in the guise of a traveler to the Yellow City and the lands surrounding it.  It is an ideal way to deliver a broad overview of what you can expect in this setting and, most importantly, convey a sense of wonder and stir up the imagination -- very important if you are looking to run a new and evocative campaign.  On the whole, it's a decent read that could have used just a tad more polishing (like the rest of the book for that matter).  Thankfully, since this book is meant to be a toolkit, the author also provides step-by-step instructions on how to actually and effectively use the book.  Examples are also given and the beauty is, there is little need to go beyond these examples to realize who brilliant this toolkit is. 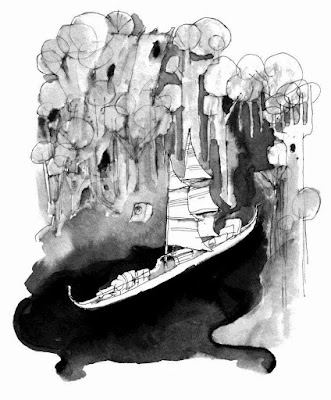 I can think of no higher praise than say that this book will give you material to create a fantastic and engaging campaign and, even if Yoon-Suin or the Purple Land isn't your ultimate destination, these ideas could and SHOULD be used in other campaigns or at least be an inspiration. You start off by defining the character's Social Circle: groups, conflicts, and rivalries.  Within these, you have your various NPCs and rumours or hooks concerning them.  Beyond this you have tables for general rumors and hooks, a variety of encounter tables for all he general areas the book covers, and everything from politics to personalities is touched upon.  Personally, starting something like a new campaign, a good network of 'background information and links' can make all the difference.

All these tables and related lore makes up the majority of the book but the book has a couple other chapters of note that precedes that material.  There is a small chapter on character creation that is suited to the setting as well as a bestiary to compliment it as well.  It should be noted that the book, while not designed for any particular system, will work with any compatible game with a D&D lineage.  This character creation chapter also features a new character class called the Crab-man (a racial class like you would find in Basic D&D).  As for the critters in the monster section, they're just fun and the greatest regret is the lack of art to help conjure an image of these curiosities.

The appendices deserves mention as well.  There are multiple and many which could be readily adapted for other campaigns.  They range from Appendix A through to Appendix N and which ranges from Tea and Opium to poisons and dungeon generation.  The majority of these will just help detail your campaign in Yoon-Suin that much more.

Yoon-Suin, as a campaign toolkit is an interesting piece of work.  There is a lot in there that commands your attention and will inspire the reader to potentially create a memorable campaign.  More importantly, it will help you to create YOUR OWN Yoon-Suin campaign.  It is well put together and logically organized but it is also a series of steps which the GM will need to take to get the most of this tool kit.  It is not however, something you can just pick up and run even through without adequate prep.  It is not a ready-made campaign adventure.

It is a decent book and, while off putting at first glance, has a lot to offer.  It is a diamond in the rough and one worth picking up.  If, like me, you might find a 9x7 landscape a bit awkward to work with, you can just pick up the PDF over HERE on RPGNow (OBS) for $9.24 USD.  However, if you like the feel of a book in your hands, you get get a physical copy from Lulu with their POD services (HERE) for $20.66 USD.