The Case of James M. Ward

James Ward's work is beloved by many gamers as one of the TSR Alumni.  His earliest published work was one he co-authored for the original D&D boxed set, "Gods, Demi-Gods, and Heroes".  More importantly (perhaps), he is known for "Metamorphosis Alpha".  He has been sick on and off the past few years, and recently there have been problems that have sent him back to the hospital.  Health Care is expensive in the States and, even if some of that is covered by some sort of insurance, other bills still have a way of piling up.

Since the latest bit of news has become news, there have been attempts to raise funds from the gaming community to help out Mr. Ward with all his bills to a varying degree of success.  However, there have been two things I have seen that I was displeased with.

1) Not everyone is a fan of Ward, or his work.  The reasons for this do not matter but bashing these charitable efforts or the man himself is just not warranted.

2) I have heard of instances where other small (indie) publishers in the OSR were almost being pressured to give a percentage of sales or simply to give.  That's just not cool even if intentions were good.

But it occurred to me, quite simply, one of the good ways to possibly support Ward and gaming in general.

Thanks to the effort of Goodman Games, there has been a recent resurgence of interest in Metamorphosis Alpha.  They ran a successful Kickstarter last year and another one to expand the quantity of in-print material this year.  This is great news of course but MA isn't just available through Goodman Games or those Kickstarters.

You can get a PDF copy of the over at RPGNow (OBS services) right HERE if you are so inclined.  At at $5.99, it's a great deal and the majority of that money all goes to 'WardCo' -- so potentially speaking, right in his pocket.  If you like that idea, there are other stuff if you look under WardCo, like the 4th edition of MA and a few other inexpensive PDFs supporting MA too.

Already have it or maybe you crave something a little more tangible?  You can get a print-on-demand copy of Metamorphosis Alpha for $14.99 USD over HERE.  Like the RPGNow version, it's got corrections and is cleaned up a bit and since he's the one making it available, he's the one that will be getting a cut from each sale.  So, buy a copy for yourself... better yet... buy multiple copies and give them to other gamers that haven't had the opportunity to pick up a copy.

Most importantly... play the game.

I really do applaud the efforts of some that are directly raising funds and there is nothing wrong with that but, in my mind, buying these PDFS or POD books will put some money in his pocket too with the added benefit of getting people talking and even playing his stuff.

Anyway, it's what I did.  About 3 weeks ago or so, I ordered a copy off of Lulu which now sits along with my Gamma World stuff.  And, for my convenience, I will be grabbing the PDF as well.  The next step will be running a session (hopefully) and, if it goes well, maybe there will be a few more copies ordered off Lulu. 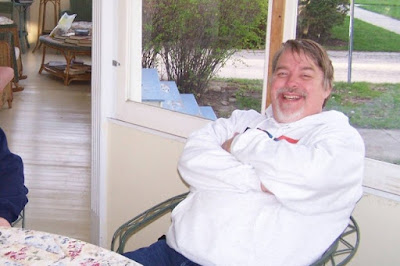 To date the GoFundMe page has raised over $15,000 (the campaign can be found HERE) and that's great.  But in my mind, supporting his work which is why the community has come to care in the first place, is equally as important.  If enough people do this, these sales won't be a small drop in the bucket either and, every dollar counts right?