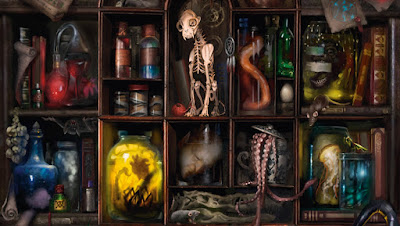 Two things have brought about today's 'reflective' post:
My recent examination of the Cypher System and, in particular how the game places particular importance on what they refer to Cyphers in the game did refresh my memory regarding how we gamed and, in some cases, how we *used* to game. Monte Cook emphasized the importance of giving Cyphers, which are basically 'game changers' that are meant to be used and are very much 'limited' in terms of number of uses.  Basically, the translate into short-term power ups that can give access to abilities or powers that would normally not be available to a given character.

In a Fantasy type game, this could be as simple as a potion that can heal, allow a person to become invisible, or even fly!  Likewise, a Science Fiction type game can do the same things but instead of a potion, it could easily be in the guise of an alien device.

In the end, what they do isn't as important as how they are given out and, more importantly, used.  We forget that, before the trend of a desire for greater character customization in our various roleplaying games, 'customization' came in the form of magic items.  You went down a dungeon, defeated the monster, and sometimes got some treasure.  Aside from anything monetary, some of those were magical items and these helped further customize and define characters.  As someone who was playing earlier editions of D&D, this wasn't ever a problem.  When you consider ever popular video games today, this is very much still a thing and looking towards Diablo, you will find this tried formula still in play.  But somewhere along the way, the plots and motivations became more of a goal than just loot and killing monsters and customization was more about building a character with a history, motivations, and a personality.  Magical gear is always cool -- just not the end game.

However in that shift, how these items were treated changed as well.  Magic should be a bit more special so maybe the decision is made to scale back.  Or the desire to 'save' something for when you really need it when it comes to a potion or scroll.  At which point, these might just end up as a collection of magical a character happens to have. 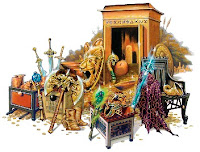 Perhaps 'disposable' things should like potions or scrolls and other limited use items be put into play a bit more often.  Yeah... that potion of Spider Climb might be viewed as 'meh' but that wizard in the party with a certain lack of upper body strength and genuine skill for the task at hand could find it useful if you know the next adventure could have some difficult climbing challenges ahead.  Encourage the use of these tools and maybe have an expiration date of some of these things.  Potions could easily have a limited shelf life and when parties find all these potions and some of these are duds due to age, they may react differently when the find a couple that are still good.

As for bigger and more lasting items ... nothing changes there depending on the game you play.  The new edition of D&D now limits enchanted weapons and armor up to +3 items in part because of how the game is  design and scales now as far as the system is concerned.  It is still a concrete way to give the party a bit more to work with by making things a bit easier to hit and damage or making them a bit tougher to hit.

But those special items could be the objective of certain quests themselves if you prefer having magic restricted in your campaign.  With all these years of gaming, it's a special item that can still surprise a player.  It needn't be powerful... just a bit unusual or fun.  Over the years, I have managed to reduce my collection of gaming books but, for my second edition books, besides the core and options books that I have decided to keep (the black ones), I have kept my four volume set of  Encyclopedia Magica because it just collected so many diverse magical items all in one source.  Frankly I should use it more given what I have just written and am thinking about.