There are so many 'OSR' attempts to re-create a perfect version of the classic version of Dungeons & Dragons but the definition of what one considers classic or perfect is so subjective.  As such, they just seem to keep coming despite that this is already so much to choose from.  Somehow, I don't think the trend is likely to stop anytime soon either.  Many seem determined to either reinvent to wheel or offer something perceived to be 'better' somehow than what came before it.  The problem with all this sort of development is that sometimes people will miss them.

It wasn't until the second edition of Whitehack, which was released earlier this year, that I took notice.  Whitehack came out originally in 2013 but it was August that I started noticing a few people on social media talking about the new edition that they had just received via the POD service provided by Lulu.  Curious, I do a bit of research and got a bit excited at what people were saying about it.  I was a bit dismayed at the lack of PDF option and more so when people were clamoring for one since the prior edition was released.  Just the same, as I was placing an order on Lulu for something else, I decided to give it a shot and got the least expensive option.  I seriously doubted it would replace my go-to FRPG anyway but I always like fresh and innovative ideas.

I felt let down a bit.

I suppose my disappointment isn't directed at the author in this case.  The reviews gave it more hype than I think was warranted and I think it was because some of the innovations being raved about were already a bit 'old-hat' to me.  For example, the system does not use an itemized skill system and given it's 0e roots, that's hardly surprising but you can effectively get a bonus on that skill roll or task based on the species, vocation, or even affiliation of the character if associated with that particular ability.  One of the examples given in the book is a character with the vocation of 'priest' associated with Charisma doing a check to try and calm a crowd.  Conversely, if the character had the vocation of 'assassin' associated with the same attribute, it really wouldn't help improve that character's odds.  The reason being that a priest would be trained to address groups of people where as an assassin would not.

To a degree, it reminds of Castles & Crusades and its Siege mechanic.  As a system, it doesn't have any skills outside of specific class skills and there will be times where characters will attempt to do something that is not specifically itemized.  A character's archetypes will help define what a character knows or doesn't know very well much like a vocation would.  If this is something that they would be trained to do, and if the associated attribute is a prime attribute, they get a bonus to that check.

The difference is the bonus.  In C&C, this works out to a +6 bonus.  However, Whitehack keeps it simpler and you get what is referred to a 'double positive roll'.  These days, this is more popularly known as the Advantage mechanic (or rather the Advantage/Disadvantage mechanic).  You roll two d20 and take the best one.  With Whitehack, this would be the lower of the two rolls as you want to roll equal to or below the relevant attribute score.  With that in mind, there are also circumstances where you would do double negative rolls and take the worse (higher) result.


But while doing this isn't revolutionary (it pre-dates WOTC's use of this sort of mechanic in 5th Edition), it *IS* elegant in its simplicity.  It's also why I have thought of trying out this instead of the +6 bonus in C&C a couple years back.  However, there is a lot of other stuff that is just as elegant in Whitehack as well.


Before we explore other aspects of the game, a few more words need to be devoted to the concept of vocations in the game.  These are NOT actual classes.  There are at it's core just three classes.  The Brave, the Deft, and the Wise which is much like True20 and its three classes -- the Warrior, the Expert, and the Adept.  The vocations are one thing that help refine the archetype and character you are trying to create for yourself.  This feels much more 'free form' and something that one might be more accustomed to seeing in a game like Fate. 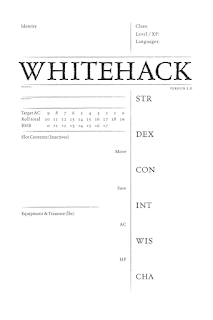 Magic is something I was curious at seeing to see how it was implemented as I heard that it was a bit different.  The good news?  Forget spell lists, the ever-familiar Vancian sytems, or even a variant spell point system for the magic!  However, if you are accustomed to a bit of structure in your games, forget about that too.  Interestingly enough, spellcasting taxes a character's hit points and some people will like or hate that.  What's interesting is HOW many hitpoints.  There is no itemized spell list to choose from in this game which means there are also no itemized spell effects that you can read up.  How powerful of an effect and how much it costs / taxes the spellcaster is effectively a negotiation between the player and the DM.  Characters who are part of the Wise class can perform miracles.  These could range from magic to some sort of science and anything in between.  Each level has a number of slots and you effectively create (word) the miracles you can perform (as best related to that character's vocation presumably).  These can be specific or broad but the broader it is, the higher cost it will likely be to perform.  Hit point costs will be anywhere from 1 hp to 14 hp as, once again, negotiated, along with whether a save is needed or not and so on.  Creating magical items also will cost hit points but this loss is permanent.  There is an interesting twist to this though -- characters re-roll all of their HD when they advance a level.

One interesting concept introduced in Whitehack is an Auction system for dealing with things like chases or other circumstances where multiple checks might be required (such as gambling).  It's an interesting choice to go with and does streamline the process.  Along with this, the game has other interesting 'quirks' which are sure to charm some gamers out there.  Whitehack certainly has a more 'collaborative' feel to game which is, in part, because of the less rigid or restrictively style it supports.

For all of its charm, the book is also relatively complete.  There is a host of critters to choose from as well as some magical artifacts to quest for.  You've got a small setting and a couple of adventures along with some pre-gens and advice on running your game.  There are even three other 'rare' classes to presented among the various odds and ends.  In short... a little bit of everything and more than enough to be self sufficient.

As far a presentation is concerned, I will say that the overall work is elegant.  The two column layout, table presentation, and the headings and fonts used are all beautiful yet simple.  There are no illustrations in the book but, somehow, you don't feel as if it needs it.  The cover of the book is fantastic as it looks like a regular oldschool notebook and even reminds me of the sort I had in elementary school and high school.   I really like the look.  The writing is clear, concise, and very readable too and, given that the main rules (the player's section) occupies all of 18 pages, quite an accomplishment.  The entirety of the book is 64 pages in a 6x9 format.

However, the work isn't as original or as much of a breath of fresh air as I had hoped for.  I'm not unhappy to have picked it up but I'm irked that such a work was not available as a PDF either.  Frankly, there isn't much of an excuse in my mind for this kind of restriction either.  At $10, it isn't a hefty investment but I don't think the base print-cost would be very high.  It is a work that is built upon the shoulders of others but whose innovations could easily be distilled for other purposes as well.

In the end, it becomes an interesting hack blending the love of OD&D, the OGL, and a couple of great concepts.

As no PDF is available, those interested in picking up Whitehack can do so via Lulu HERE or you can read about it at the source over HERE.