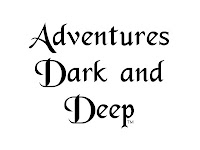 Well, true to his word, has started a new Kickstarter to release the first of three books that have been planned and written for Adventures Dark & Deep.  When he first did the KS for 'A Curious Volume of Forgotten Lore', his goal was to raise $2500 for artwork, editing, and the production costs related to the print run to satisfy the backers.  I initially thought the goal a modest one and decided to pledge an amount myself.  The objective was reached about two weeks during the funding drive and by the end of it, Joseph Bloch had raised about 3 times the amount thanks to 244 backers.  Of course, the amount raised was before the Kickstarter and Amazon fees.

I gave the book a favorable review when I got the PDF version (the physical copies were in development at the time) and this can be seen HERE.  In the article, I noted a couple of quibbles I had with regards to presentation which, once I was able to flip through my physical copy in October (I received the book on the 24th), I essentially recanted in a subsequent post.  The presentation did look better flipping through the pages as opposed to the PDF despite the whitespace.

While I think the book is a decent book and I'm happy to have it in my collection, I was ultimately disappointed by the pricing I saw when I realized it was print on demand project via a third party.  To be clear, the problem I have had nothing to do with the fact it was POD but the price structure for it.  The creator had disclosed that the goal was to raise money for the art and editing of the text.  However, those people who wanted a hardcover copy when they backed the project had to pony up $60 for the privilege (they also get a copy of the PDF).  Anyone who decided to not pledge but subsequently get it off of RPGNow can get the same thing for half the price.  From a what I have read and heard, I know this was a concern for some people.

I'm pleased to say that the pricing structure is a significantly more favorable with the new Kickstarter though and, if you are the slightest bit interested, it would be well worth your while to take a good look.

But what is Adventures Dark & Deep?  If you read my review or having been keeping up with things in the gaming community and already know, feel free to skip ahead.  If not: Adventures Dark & Deep is basically a 'what-if' scenario.  What if Gary Gygax hadn't been forced out of TSR and was able to bring a Second Edition of AD&D as he envisioned it.  Joseph Bloch did quite a bit of research and culled information from articles and statements that Gygax made and crafted together a possible 'vision' of such a project.  The aforementioned book, 'A Curious Volume of Forgotten Lore' was essentially a companion book which could be used for existing systems to bring these options to the table.

For those interested in a stand-alone game embodying some of the options and concepts previously introduced in 'A Curious Volume of Forgotten Lore' -- this is what Joseph Bloch is endeavoring to deliver to you now.  The new kickstarter is the first of three books which will embody the core set for Adventures Dark & Deep.  The KS found HERE and basically the key pledge levels are $10 for the PDF, $30 for softcover and PDF, and $40 for hardcover and PDF.  This is great pricing given that it's twice the size of the previous options book and what would expect to see for a similar product in retail.  Other pledge levels are available too.

Will I get it?  Doubtful but only because I feel I have all I need with the earlier book in the line.  I'm still considering it though and may back at the PDF level and if I don't do that, I will at least pledge something since I do believe in what Mr. Bloch is doing here.