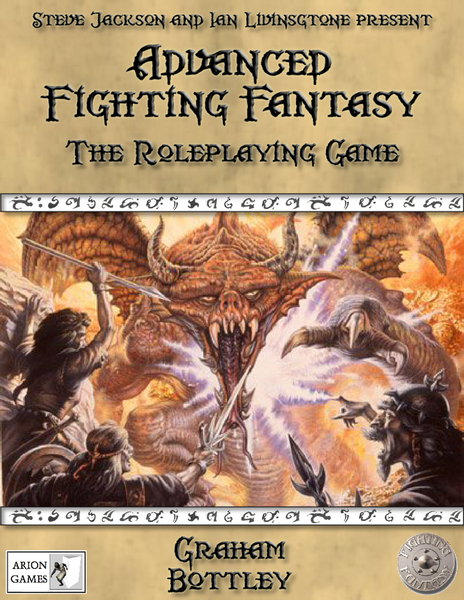 Back in July, I wrote a bit about the the Fighting Fantasy books I had been exposed to (they were French translations) before I got started into D&D.  They certainly gave me enough of a taste for the sort of things that would appeal to me in the myriad of game systems and adventures I would embark playing at the age of 13.  You can check out that original post HERE.

In any event, being ever on the lookout for an interesting game or system, I came across the 'Advanced Fighting Fantasy' RPG during my online browsing at one of my favorite second retailers, and ordered it amongst a few other things a couple of weeks ago.

There is something to be said, and tends to be forgotten, when looking at all the games we have at our disposal.  Simple doesn't mean inferior or make it any less enjoyable.  Before I began flipping through the pages of the book, and thinking back on those days reading those Fighting Fantasy books, I wondered why on earth would an RPG based on this basic system need 174 pages.  As I began reading various sections, my fears were eased somewhat though and the very basics of the game are covered in two-and-a-half pages before giving an introductory dungeon adventure spanning another seven.  The game is just not complicated and can easily be grasped within moments.  There is a lot of unnecessary page use in this book and part of me wishes for a more condensed approach but, what can you do...

The first chapter starts after this quick game system summary and the introductory adventure and predictably covers character creation.  No surprises here though things are simple and limited enough.  You can be human, dwarf, or elf.  You really worry about 4 stats and assign points to base numbers.  You further differentiate with skills and finish off by selected a talent.  All this along with skill and talent descriptions and covered in a dozen pages.  You have then about an equal number of pages with each providing an pre-made archetype set up as a character sheet.

The second chapter gives a more detailed examination on the game rules with the following two chapters dealing with combat and magic respectively.  Once these bases are covered, more material is provided which is perhaps more setting oriented -- topics such as religion and the world of 'Titan' add some substance which may not be of much interest to some but a welcome addition none-the-less.

The book is completed by providing some monsters and treasure as well as some guidelines to running and designing an adventure as well as the inclusion of some optional rules.  The book is nice but, the cover price of $29.99 is pretty steep if you consider what you're actually getting here.  You have an interesting sampling of black and white illustrations throughout the work and the presentation of the book is well done though, it seems like the desire to make this into a bigger RPG than what it really is does Advanced Fighting Fantasy a disservice here.  You need to consider that they have a couple other books to complement this book but, in the end, a more precisely condensed version of the book would have been less expensive and likely of greater interest to anyone who has had fond memories of Fighting Fantasy.  I think the lack of a sleeker and smaller offering is a missed opportunity to get others to pick this up.  Another problem is the lack of a PDF option -- you only have the option of the physical book.  However, they have at least provided a quickstart which is available for fee at RPG Now!  I was fortunate enough to pick it up for about half that price for my secondhand copy.  Of course, you could also try and track down a used copy of the original Advanced Fighting Fantasy book -- the version I picked up was released in 2011 and considered a 'second edition' to the game.

Advanced Fighting Fantasy is, at best, a gateway game or a fast pickup game but could still be used for a prolonged campaign.  Given that there are so many systems that offer a variety of complexities for their characters, it is nice to see a system that can be introduced to novices or younger gamers as well as just to have something to mess around with in lieu of a regular game or campaign.  Also, given the simplicity, the focus becomes less about the rules and more about the story and the enjoyment derived from playing.