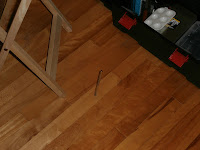 For those who read my post from about a week ago, I mentioned that one of the things I was working on was a new painting project.  I've pretty much finished it a short while ago this evening though I still can't reveal it.  I will be able to show off some pictures... both a few 'work in progress' pics and the the final results after this coming weekend.  All that's left to do is to do a sealant (a matte varnish) to protect it and mount it on a surface that I chose for it.  Actually it's composed of a couple of pieces and they form a sort of diorama.

However, in lieu of my successes with this project, I thought I would share a few mishaps and miscalculations during the production of the project -- for your amusement.

At first, I received the thing in pieces in a sort of plastic blister pack.  The pieces were metal which is nice given the tendency to produce stuff in resin and plastics nowadays.  Obviously, the first step is to clean the various pieces.  By this I mean actually washing them to remove any residue which may hamper the painting process as well as cut and file away any unnecessary bits.

One of those great and VERY sharp tools I use for this is the hobby knife.  I was working with it on and off, occasionally putting it down to pick up and use a metal file.  I work on a very small table (basically a TV tray at present) and the hobby knife is round.  Here's a picture of what happened to the hobby knife after it rolled off the table. 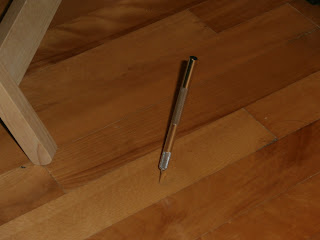 It was a few inches away from my foot but thankfully, the floor took the hit.  So... lesson learned,  put the cap on in between uses!

The second bit of 'lessons learned' was when I came to add the black primer to the pieces.  Now, I live in Canada and this time of year is kind of damp, freezing, and usually involves snow.  We have been fortunate though so not much in terms of snow or ice but we have been seeing freezing temperatures for a few weeks now.  Now my primer comes conveniently (or rather inconveniently) in a spray can.  Never use a spray can in an area that is not well ventilated which pretty much means 'outside if you can'.  Well, I couldn't but what I had to coat in primer was rather small and, this apartment was a rather special characteristic, HUGE WINDOWS that almost completely open up!  Really, one wall of my study is basically windows from wall to wall and ceiling to about 3 feet off the floor.  We also have high ceilings.  So, what do I decided to do?  close the door and completely open the windows.  I basically do three 'runs' of spaying (additional spay contained by a large box)... each very short but extremely effective.  It smells of course (thanks propellant) but the smell dissipates quickly each time thanks to the airflow.  Of course, the windows are left open during all this time as I allow each section I primed to dry before moving to get a different side/angle.  This takes about a couple hours (though I could have done it in half the time) as I wanted to be sure the primer was dry and odor gone before I started again.  At the end of all this, I decide to close the windows as the temperature is starting to drop in the study.  The windows are frozen in place.  I started this shortly after getting off work and the windows opened easily enough but a few hours later, the temperature dropped a few degrees causing some condensation to freeze a bit, and so on...  You get the picture.  Naturally, I can't allow this to go unchecked.  Image a guy, trying to get a window 'unstuck', partially leaning out of the widow / apartment to do so (no worries -- I was very safety conscientious).  Top floor of the building but it's a low-rise and only 5 floors.  Thankfully, it didn't take long for me to get a large quantity of hot water to splash on the window (outside) which quickly got things moving again.  Guess I won't be doing that again anytime soon.  ;)

The last significant bit is not so much something I did or didn't do and more of a case of things just happen sometimes.  There were aspects of this project which would have made an airbrush a perfect tool to simplify my life.  I had held of on using the airbrush up to then since I was also waiting for a conversion kit to use both airbrush and spray gun with a minimum of fuss.  I received it at the start of the project which seemed almost too perfect.  When the moment finally calls for it, I setup my gear, and turn on the compressor.  It's loud but that was expected.  However, it's making unusual noises as well -- not good.  After looking into this further, it seem like there is a problem with the 'relief valve'.  To be clear, this is a diaphragm compressor which means the pressure and airflow is constant as opposed to filling up a tank of air and shutting off.  When there is too much pressure, the excess is 'discharged' -- I guess it was either malfunctioning and/or sticking.  In any event, an airbrush was *not* used for the project.

That said, while the project was a great way to practice my skills and techniques, and while not everything went to plan -- I'm really digging the final result.  It's a gift which I hope will be appreciated and I think I will be a bit sorry to see it go.  The good news is I have another identical model coming in so I can try all of this again for the next one which I intend to keep.  ;)