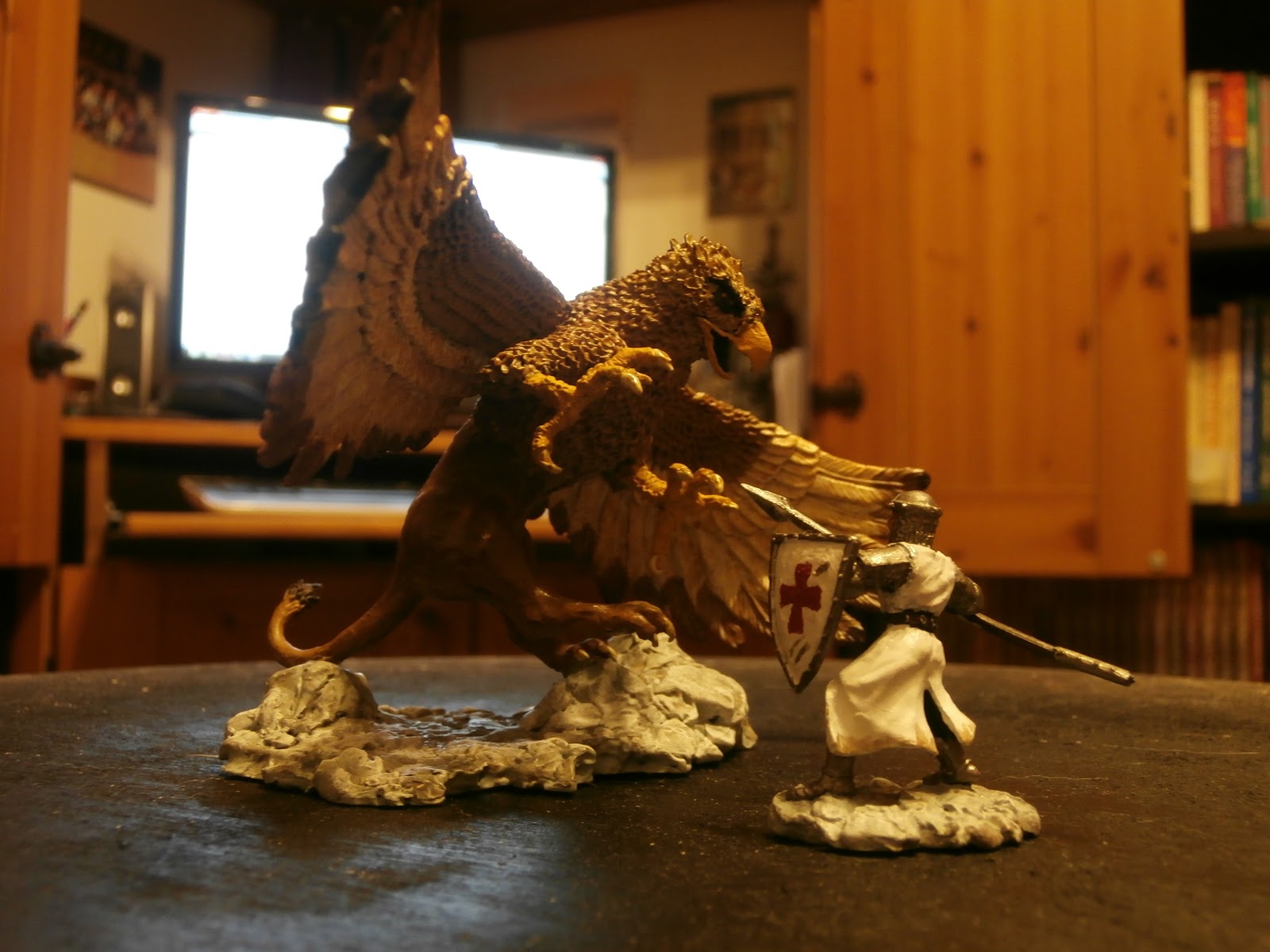 Well, I thought I would have the chance to post a bit more earlier in the week -- if not finish up my weekly R&R series but things don't always go the way you want.  I also wasn't counting on the bug I caught a couple of days ago putting me largely out of commission.  The staff X-Mas party for the company I work for was on Wednesday (the day after my last post), and I wasn't feeling too well the next morning.  Initially, I thought it might have been due to the heavy drinking I enjoyed the night before but the shivering as the result of the fever and the challenge of keeping food down a couple days later helped form a different theory as to why I was unwell.

Thankfully, I was well enough to enjoy a very late screening of the 'Hobbit' on Friday night (for those curious: 3D at 48 frames / second).  I enjoyed it very much though I am one of those forgiving sorts who had no issue with Peter Jackson's 'Lord of the Rings'.  I won't dwell on the movie on this post but may write about some of my thoughts in the next week or so.

Instead, the time has come to reveal what I had worked on, and finished as well as describe in better detail what went into the finished project.

First things first, the item in question (a set) came to me in multiple pieces in a smaller blister pack.  It was metal and consisted of 9 different pieces.  The base / rock which the griffin sits on had three points of contact with the most important one being the paw which needed to be flush.  Unfortunately and for whatever reason, there was no way to have either of the other two points of contact (the tail and left wing) to sit properly.  I had to modify the base using Green Stuff accordingly and created a better point of contact for the tail.  Using some super glue, I affixed the necessary pieces and filled in any necessary gaps with a bit more Green Stuff and some careful sculpting.  Naturally all this came after a good cleaning and tidying up of the various pieces first.  I primed in black once ready but kept the assembled Griffin and Rock Base separate during the painting process.  Once again, all paints used in the process are from the Citadel line.

The Rockbase was the easiest so I'll get that out of the way first.  I applied a base coat 'of Celstra Grey', I used a wash of 'Nuln Oil' for my shade, and finished off with a dry brush of 'Longbeard Grey'.  The base for the Knight got the same treatment.

The Griffin had more effort go into it... base coat for the body was with 'Steel Legion Drab' and the base coat for the small feathers (including head and feathered portion of torso) was 'Zandri Dust'.
The success rows on the feathers were done in 'Ceramite White' but as you get to the last row and tips of the feathers, I used 'Baneblade Brown', 'Gorthor Brown', and 'Rhinox Hide' blending from lighter colors to dark.

I applied an initial wash of 'Seraphim Sepia' to body and wings of the Griffin which did an amazing job of capturing some the finer details in the sculpt.  I should point at that normally, I would have added some highlights to the body to better show off the musculature but it didn't seem necessary when I arrived at that point given the results of the shading resulting from the wash.

The beak and talons were done using an 'Averland Sunset' with the actual claws down with a layer of 'Screaming Skull' using 'Nuln Oil' for shading.  The final detail were the eyes which is hard to see in the photograph.  I used 'Baltahsar Gold' with regular black for the pupil with a couple coats of 'Lamenters Yellow' glaze.  To finish up the Griffin, I applied more 'Seraphim Sepia' as necessary for the beast as a whole.  I should also point out that 'Rhinox Hide' was used for the tip of the tail as well to match the darkest parts of the wing feather tips.

The Knight was, for the most part, simpler and took less time to do with the exception of the face.

'Ceramite White' for the cloth, 'Leadbelcher' for the armor / chain as far as basecoat was concerned.  The same white was also used for the shield with 'Mephiston Red' for the cross.  On the first attempt, I screwed up the cross and, given the white background, I had to repaint a thick coat of white for the shield which gave it more of a textured look.  This kinda worked though making the shield look a bit more beat up so-to speak which is which I added scratches / gashes on the shield using concentrated 'Nuln Oil' shade in a couple places (as opposed to simply painting on gashes).  The effect worked well enough.  The spear was done using 'Rhinox Hide' for the shaft with 'Leadbelcher' for the tips and the spearhead was further accented with 'Runefang Steel'.  The bottom of the robe got a think touch of 'Zandri Dust'. 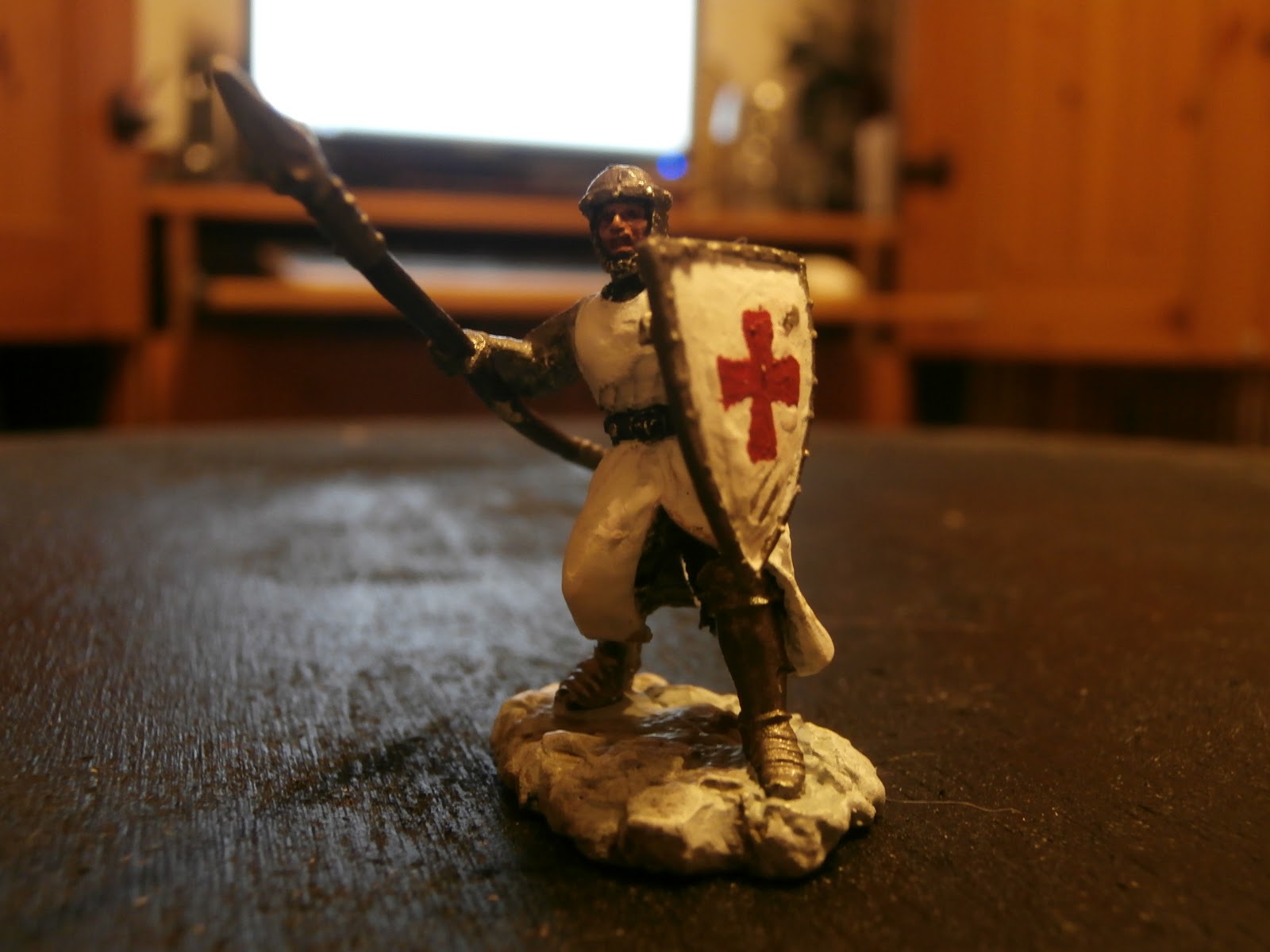 The knight's face was a different matter.  For such a small area of detail, it received a base coast of 'Bugman's Glow', a wash of 'Reikland Fleshade', a layer of 'Cadian Fleshtone', with some Edging with some 'Flayed One Flesh'.  The Edge line of paints are new and were just released as part of a 'Eavy Metal gift set this year from Citadel.  Pricey but I really like these paints and the brush that came part of the set is quite nice.  Think of the edge paints as a liquid solution to some of the Drypaint line.  Black was used to highlight the eyes and mouth as necessary.

When the pieces were done, they were sealed with a matte varnish and affixed on a small circular mirror using a combination of super glue and contact cement. 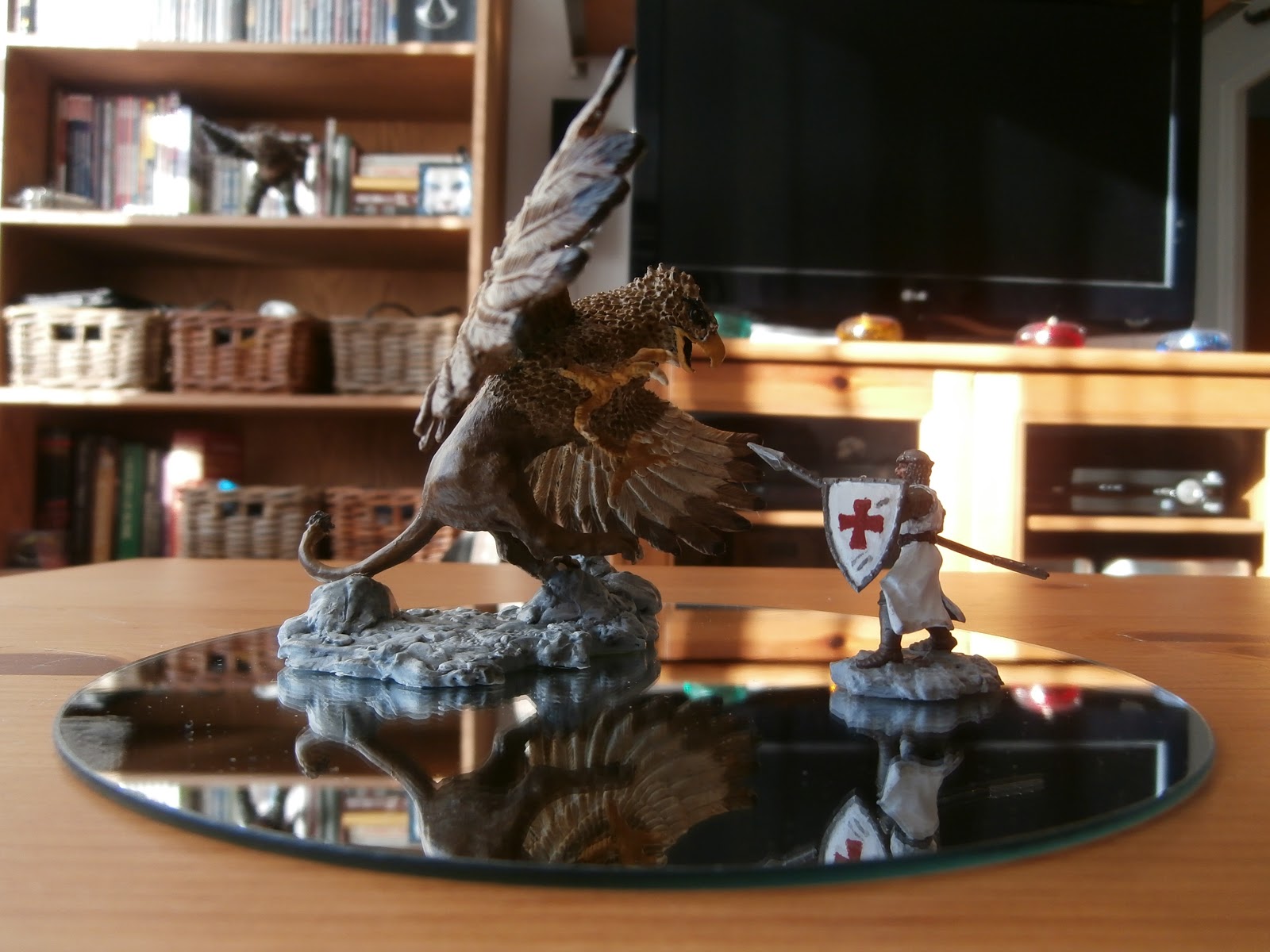 The gift was very well received and admired by the rest of the group when given today -- I am happy that it was liked and happy that I received some nice praise for the work.  Well worth the effort!