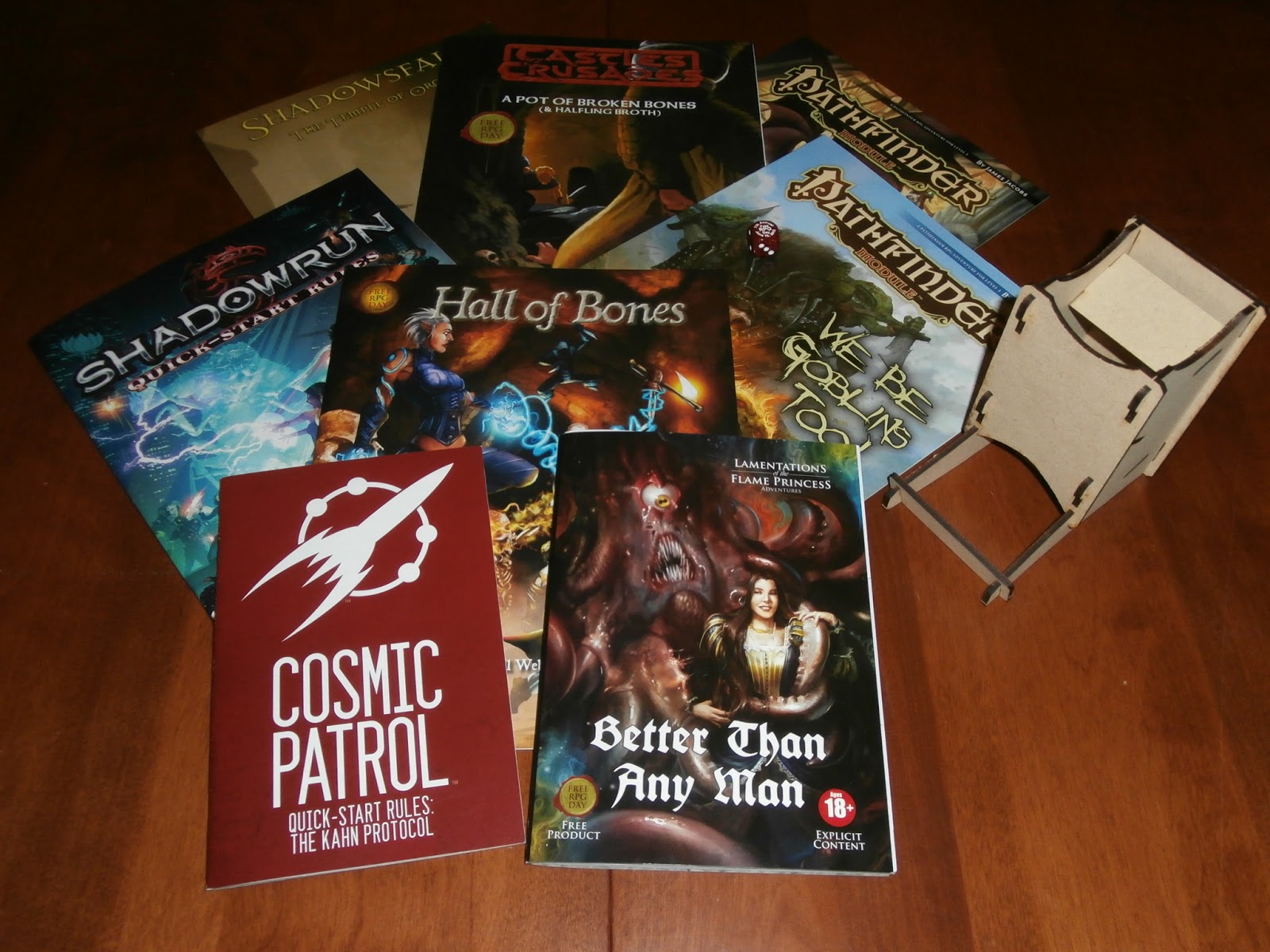 It's been over a week since my last update but it hasn't been because I wasn't up to it or anything.  The past couple of weeks have been quite busy and I've still been recovering from the back problems and the pain it was giving it since I threw it out a couple of days before the Montreal F1 Grand Prix.  I've had a couple of rough days since then (and my last post) so, I have avoided putting myself in front of a computer for extended periods of time outside of work (when I went to work that is).

The good news is that it is mostly good now and I was able to get my game face on and ran a Castles & Crusades game at the local game store with a minimum of fuss.  First off, let me just say that I like Free RPG Day and I have always supported it by helping to run a game by a contributing publisher.  Since the beginning, Troll Lord Games have participated and every year I end up running a game.  Actually the past couple of years, someone from the store has called me up and asked if I would be willing to run a game.  I've always agreed so long that it doesn't eat up too much of my day since Free RPG Day seems to fall on the same weekend as Father's Day.  Or at least, it has the past couple of years.  Now, I have heard problems and stories every year that this is done -- usually because of how a particular store decides to run Free RPG Day.  However, because I run a commit to run a game, I can also get my hands on the free product for whatever I am running.  This I think is a great help -- it's always better to have a chance to prep and have an idea what you're in for after all.  The other benefit is I usually get to at least peek at what else is available for the day in question.  It also guarantees my the chance to grab an item before they are all gone on the day in question.

The game itself was quite entertaining... I had three players and the only other game that was going on to promote Free RPG Day was a Pathfinder game.  It almost seems like the store dropped the ball this year... kinda like they did last year actually.  Previous years seemed to always be busier but the store still attracted some people but I think the store was also running some other event elsewhere in the store.  Anyway, I was happy to have my three players.  One of them had played in last year's game I ran and was more than happy to sit at my table for another game.  The other two were two lovely women -- one who had some experience with Vampire and the other who had no experience with a pen-and-paper based RPG.  Thankfully, the gist of the C&C made it quick and easy to pick up and we were having a blast in no time.  For the most part, I stuck with the scenario, though I added an extra challenge involving a rope bridge that the party needed to cross.  While I liked the scenario that Troll Lord Games put out, I felt it didn't provide a good concrete challenge to showcase the Siege Engine and checks early enough on.  As for the rest of it... the final encounter with the two trolls proved very entertaining!  The adventure didn't quite have a happy ending ... I decided to have the circumstances of their victory turn sour and have the session end on a cliff hanger of sorts.  You see, they came across the sarcophagus and couldn't leave well enough alone.  Actually, it was the newest player... playing the Rogue... that proved to be too curious.  I took a bit of artistic license to close up the session...

The open the sarcophagus which releases gust of stale air.  Cut to the village... the halflings are already celebrating having been freed earlier on and await for the return of the heroes.  The sky darkens... and a host of riders carrying banners bearing the symbol of a certain and long deceased archmage yelling a battle cry descends on the village in full charge, killing any standing in their way.  Cut back to the tomb... the party is surrounded by the walking dead... and a powerful undead magi with glowing staff in hand raises from the sarcophagus.  I announce to the players that their characters are about to fight for their very lives.  End Scene.

The players loved it.

At the end of the day, I began to gather up my gear to clear out.  I managed to grab a few more things that hadn't been picked up -- probably due to the less-than-stellar advertising for Free RPG this year (at the store anyway).  Interestingly enough, I also picked up an item or two from last year's event.  They still had stuff from last year and at the end of the day, they basically packed it up to use for this year.  So what did I grab?  Besides the C&C one which I had early access to, I *had* to pick up 'Better Than Any Man'.  This was my first pick and made sure I grabbed at the start of the day.  Between Troll Lord Games and Lamentations of the Flame Princess, I was good to go since I also believed others should have a chance to grab some stuff.  At the end of the gaming afternoon and seeing the lower-than-expected turnout, I made sure to grab the 'Hall of Bones' scenario from Frog God Games.  The rest was gravy... the Dice Tower was raffled off and I was lucky enough to win... the two Pathfinder modules were among several copies left so I grabbed those two (one from 2012 and one from 2013) -- I also grabbed the 'Shadowsfall: Temple of Orcus' which was also designed for Pathfinder by a third-party publisher from 2012.  Finally, there was the Cosmic Patrol quickstart as well as the dual Shadowun/Battletech quickstart I made sure to get as well.  A nice haul and certainly more than I grabbed compared to previous years though it's always nice to check some of this stuff out.

This weekend, I will review my 'top three picks' of this batch for the Weekend R&R.