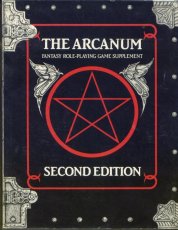 Yesterday, I spent some day contemplating the Cleric and the possibilities and directions one could take it.  I also made a point to re-acquaint myself with a book entitled 'The Monks of War' which details with the various martial/militaristic orders of the church such as the Templars, the Hospitallers, and the Teutonic Knights for some additional inspiration.  I also decided to look through some of my other gaming material for some inspiration and that's when I spotted my copy of the Arcanum (the first book in the Atlantis Trilogy).  I subsequently thought that the Arcanum would make a great post for this week's Weekend R&R entry.  And so here we are.

The Arcanum system has had an interesting history and it's origins are rooted in supplements for fantasy role-playing games.  These were the Compleat Adventurer, the Compleat Alchemist, and the Compleat Spellcaster and they were often used in conjunction with AD&D.  These supplements were essentially the seeds which eventually grew into the Arcanum RPG -- a game that took many queues from but sought to improve upon what was offered in some of the RPGs of the time.  Particular focus on skills and magical systems helped the game stand out.  The game grew and acquired a following with some fans adopting the rulebook as a comprehensive collection of house rules.  Others accepted the game wholeheartedly and adopting it as their game of choice.

The result of all this was Talislanta.

Looking back at the Arcanum though reveals an interesting shift and desire to clearly define a gaming experience but retain a simplicity and familiarity while providing a more detailed system.  In some ways, the game was ahead of its time and it offered people familiar with D&D options which were otherwise unavailable. As a game system (by today's standpoint), it's far from perfect but there is much still valid today -- especially given the popularity of the OSR.  Marrying some of the rules in here and, say Swords & Wizardry, would be to the delight of many gamers.

The book itself covers many of the things one would expect from a game that is clearly inspired from D&D -- there are over 30 professions (classes) and the character is very much defined by attributes as well.  The difference here is that there are 8 (not 6) but 5 of which will be instantly recognizable.  Characters gain skills based on their class as well as their background.

Combat and Saves are all done with a d20 with appropriate mods from attributes, level, and other modifiers. Many other types of actions are also done in a similar manner which probably makes the Arcanaum the first d20 game.  In relation to combat, there is a chance to defend and any hit that goes through is soaked by the armor with the difference impacting on a characters health.  In other words, wearing armor does not make it harder to hit you.

Of course, many of these concepts have brought brought into the D&D games we know in subsequent years since the Arcanum's release.  The first two editions of the Arcanum were released prior to the arrival of AD&D2E.  I suppose that, to a degree, this does invalidate some of the Arcanum's wonderful charms.  The book is also not that well organized in my opinion.  But it remains an interesting work and -- if nothing else, the section of magic and alchemy helps give a flavor that most of the D&D games sorely lack.

To date, the Arcanum has seen three editions with the third being released by Death's Edge Games.  This third edition is essentially a reprint of second edition with some minor layout changes.  The cover for the third edition does not look anything like the previous editions and, while there is some dislike of the new cover, it is decidedly cheaper and still possible to get a new copy if you look around online.  Older used copies of the first and second editions run easily for $30 to $40 for a copy in fair condition.  Compare this to $20 for a new copy at Noble Knight Games.  Unfortunately, I don't believe a PDF edition is available for purchase.

There are only two additional footnotes I can give for the Arcanum:

1) Some time ago, the IP was secured by Khepera who managed to put out 'Atlantis: The Second Age' game thanks to a successful Kickstarter.  While the system has changed -- it is updated to use the Omni system which is still 'd20-centric' it is very much based on the Arcanum game which was part of the 'Atlantis Trilogy'.

2) It's Priest... in continuation to what I was looking at yesterday, Arcanum presents a priest which has the abilities to convert and to turn undead.  As spellcasters, they do not wear armor and their combat training is considered 'untrained'.  Spells (from memory) are 2 per day plus 1 spell per level and casting level is half their actual level (so a 6th level priest can not cast more higher than 3rd level spells).  This last bit is the same for all spell casters in Arcanum actually.  It should be noted that the spell lists don't really have any offensive spells