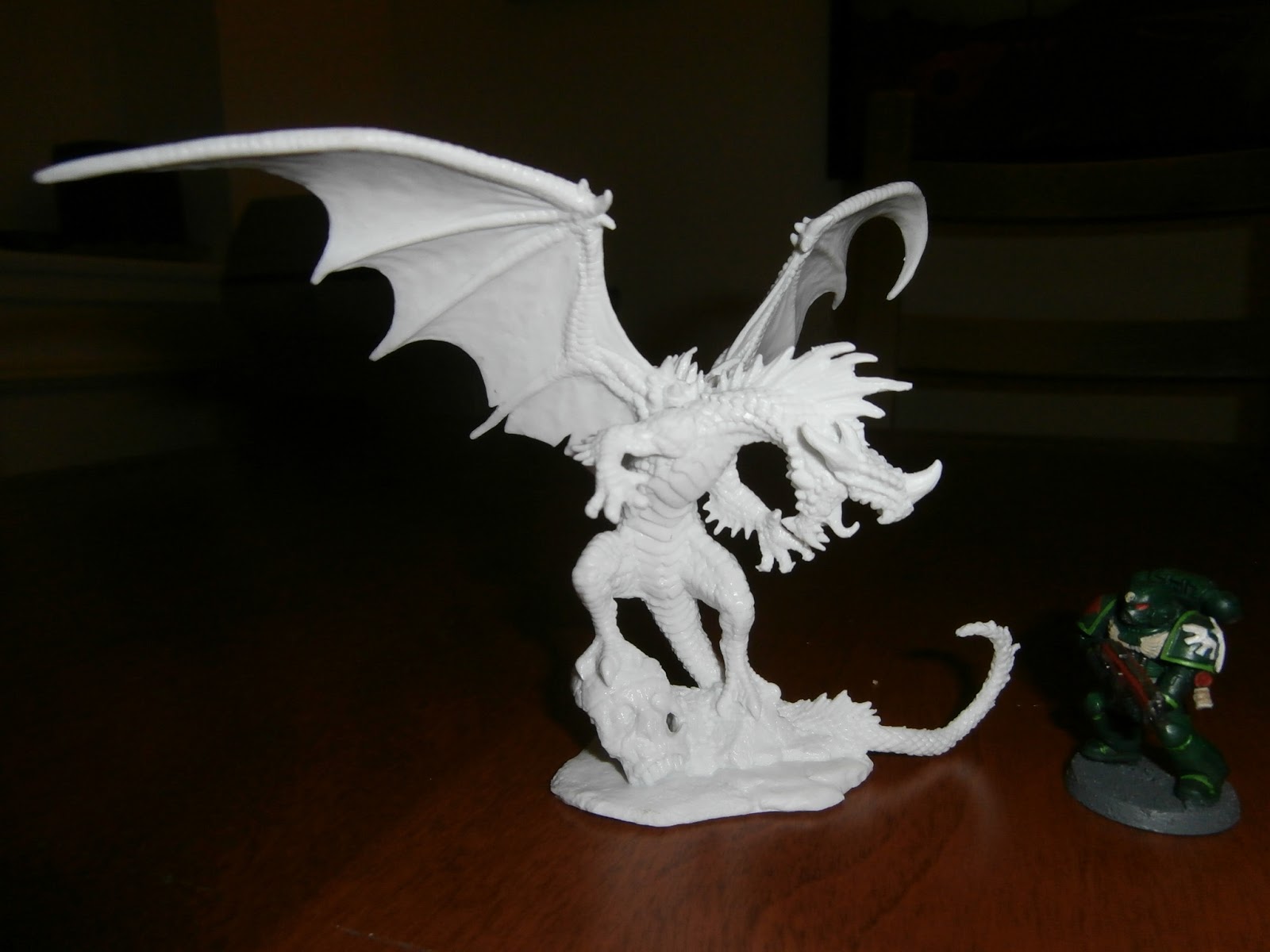 When the Reaper comes knocking... sometimes you just need to open the door.  In this case, I'm talking about Reaper Miniatures and my large Bones order (from the massively successful Kickstarter) finally came through.  UPS delivered the package mind you but it was a pleasant experience for a change.  I wasn't screwed over by Brokerage fees because of the work and bureaucracy that Reaper put themselves for the benefit of us folks living in the Great White North.  As I quickly found out, I was one of the few and very lucky.  Apparently there was some sort of paperwork snafu which resulted in UPS returning a couple hundred packages to Reaper because the wrong forms were filled out (forms that UPS provided in the first place).

At least this is what I understood from what was relayed to me.  Many Canadians received an initial tracking number (like I did) but most of those numbers are now invalid and this whole process got delayed.  Given the hectic schedule that Reaper is on to fulfill many more orders, I'm not sure when they will revisit and refile said paperwork.  Hopefully sooner rather than later but, with Canada's long weekend which is followed by the 4th of July holiday in the States, I would be surprised if there is much movement this week.

That said, I am overjoyed with the prospect of having over 500 miniatures to paint... in addition to quite a few Warhammer 40k ones as well as others from Center Stage Miniatures (how could I say no to demons and devils?) which have yet to arrive.

The box was fairly sizable as can be seen in the picture below.  Keep in mind that the table surface area is 4x3 feet: 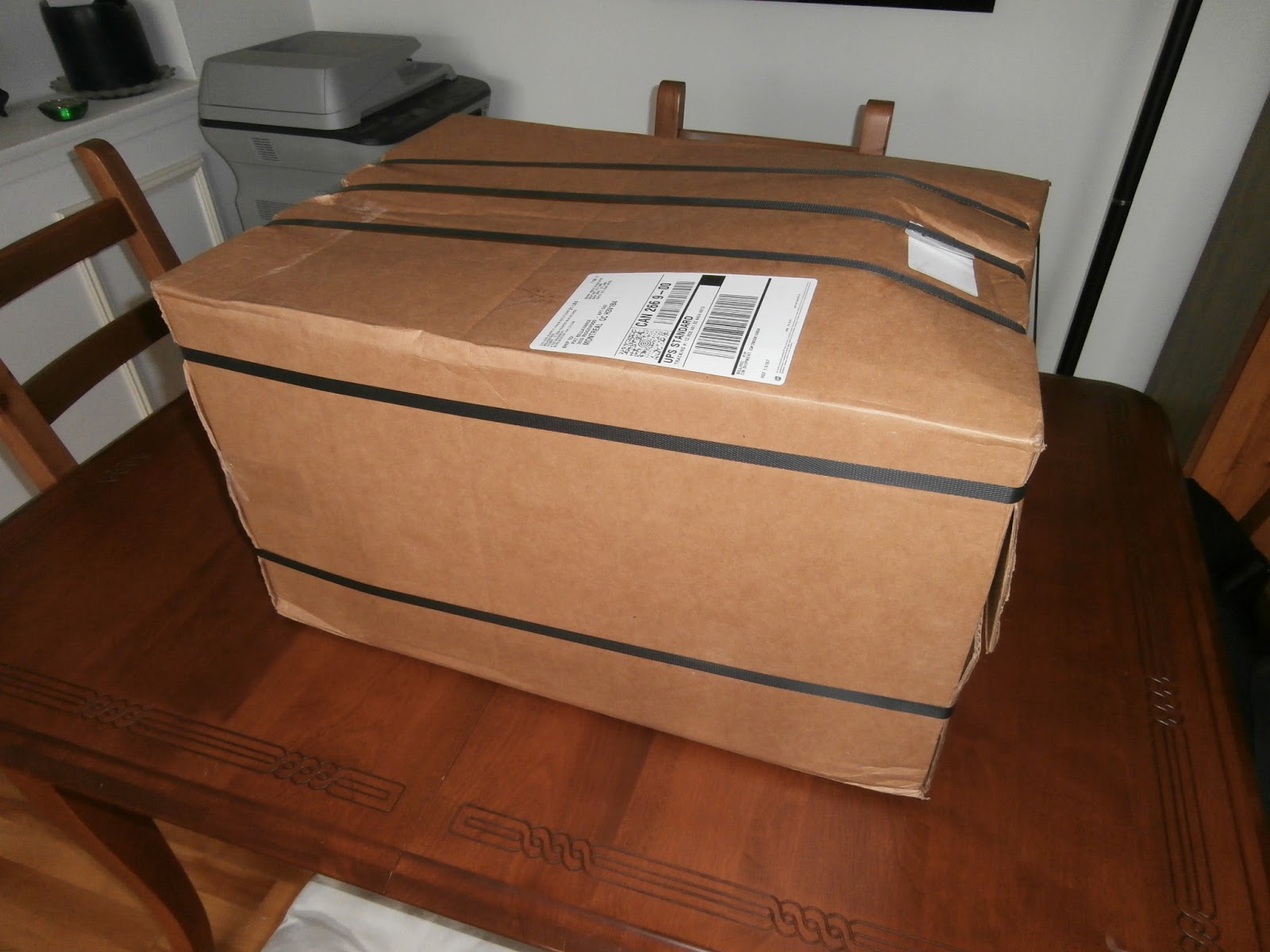 The precise contents were two of the Vampire pledge levels as well as one of each of the add-ons.  There were also two carrying cases in this box.  Here are the contents spilled out on the table without the two cases: 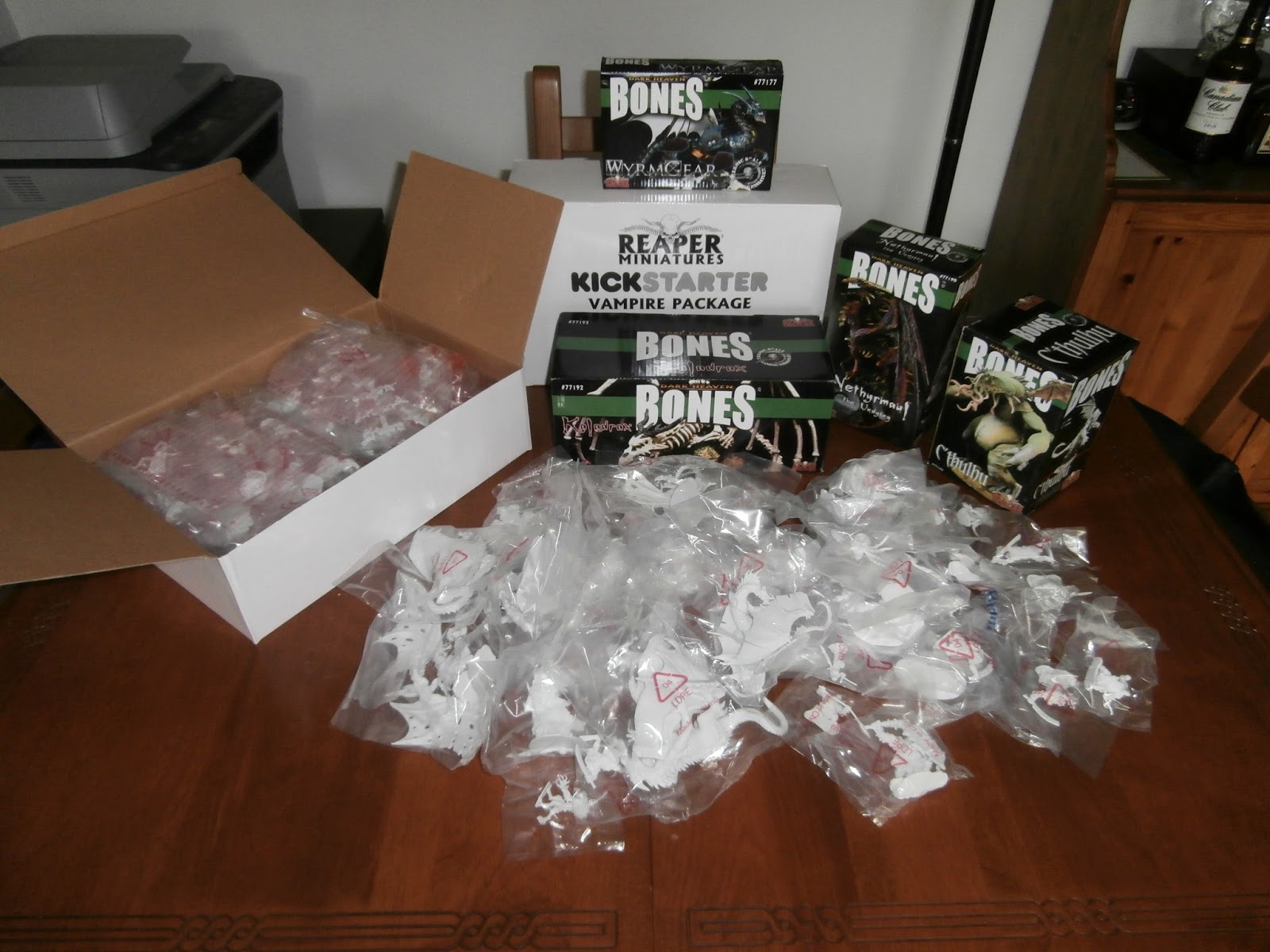 Quite a bit of stuff to paint and I'm not entirely sure where to begin.  I will likely pull out the various skeletons and mummies first.  Their color schemes will be approximately the same (bone and wrappings) as far as a base coat is concerned and even with the application of washes, some highlights, and some drybrushing, these should be quick enough to get done.  It helps when you use a gun or airbrush to apply base coats.  As a treat though, it also means I have a large Undead Giant which will need similar treatment as well as Kaladrax himself.  Kaladrax is one big Undead Dragon and the sheer size of him seems to dwarf the Cthulhu model I have.  That's because of the tail length though -- those two models are the biggest and heaviest models I have now because of this Kickstarter.

Once these bones are done, I'll probably tackle orcs next -- got close to 30 of them but these will take a bit more time but I'll be doing it in a similar color scheme I used for my last batch of Orcs (I did up a painting guide for them HERE).

Between these two sets of models, I'll have tackled between 5 and 10 percent of my Bones made a bit less painful by batch painting.  After I do that, I can easily tackle other groupings like the goblins I have as well as the rats, spiders, and other vermin.  Beyond those, it will get a lot more painstaking and, between these and some of the 40k models I have, we will probably be in 2014 be the end of all of these!  I easily have a couple of years of painting ahead of me but I'm gonna love it.  ;)